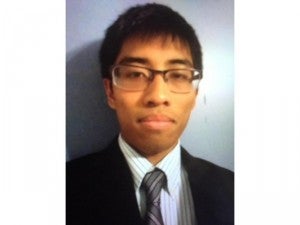 SAN FRANCISCO – Police in Middletown, New Jersey, reported that a 22-year-old Filipino resident is missing has been missing since Sunday, December 13, after he was last seen at 1:30 a.m. at his home on Kentucky Avenue.

A massive search was launched Sunday near Natco Lake to try and find John Fernandez, 22, but there was no sign of him, police said.

Fernandez is described as 5’10 with a thin build and black hair. He may be wearing a dark gray leather jacket with a gray fabric hood and black high top “Heely” sneakers with wheels similar to a roller skate, according to a report by the Middletown Patch. His Facebook page says he studies accounting a Seton Hall University.

Divers were called in from the Monmouth County Sheriff’s Office Underwater Search team to search the lake and police dogs were also used in the search. ATV units and the sheriff’s department helicopter combed the wooded area, but there was no sign of Fernandez,

Anyone with information is asked to call Detective Kelly Godley of the Middletown Police Department at (732) 615-2120.