Pope asks Aquino to pray for him, gives peace sculpture 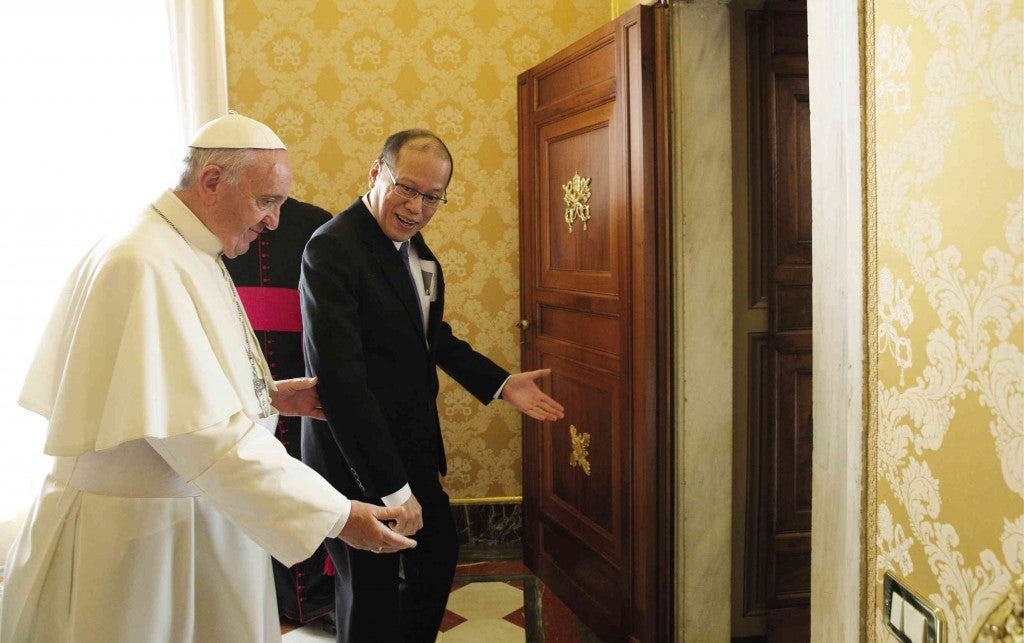 AFTER YOU, YOUR HOLINESS Pope Francis and President Aquino look chummy as they emerge from a 45-minute private meeting on Friday at the Apostolic Palace in the Vatican. The Pope asked Mr. Aquino and Filipinos to continue praying for him. “When we are face-to-face with the Pope, we always ask to be blessed by him, for him to pray for us. But the Pope had only one message for us: that is to pray for him,” says Mr. Aquino.

This was the message of Pope Francis to President Aquino, members of his Cabinet and the entire Philippines in their brief private meeting at the Apostolic Palace here on Friday morning.

“I went to the meeting more as a Catholic talking to the head of the Catholic Church than being a head of state,” President Aquino told Filipino journalists who covered his weeklong visit to Paris and Italy.

Mr. Aquino said he found it difficult to explain what he felt when he met the Pope.

“He is a very simple person who greets you immediately with a smile … When we are face-to-face with the Pope, we always ask to be blessed by him, for him to pray for us. But the Pope had only one message for us: that is to pray for him,” Mr. Aquino said.

READ: Pope Francis asks Aquino, PH to pray for him

“When he said ‘pray for me,’ I told him, ‘Holy Father, I think in the Philippines even those who are not Catholics pray for you and I’m sure that continually happens,’” the President added.

Mr. Aquino said that with the media’s help, he hoped that this message of Francis would reach all Filipinos.

The President also said the matter about Davao City Mayor Rodrigo Duterte cussing the Pope was not at all brought up at their meeting.

“To be honest, I didn’t personally hear what Mayor Duterte said. I just saw what was written in the news reports about what he supposedly said …. Perhaps I should leave it at that,” Mr. Aquino said.

President Aquino arrived at the Apostolic Palace, the official Papal residence, at the Vatican before 10 a.m. (5 p.m. in Manila).

The Philippines’ Ambassador to the Holy See Merceditas Tuason accompanied President Aquino at the meeting with the Pope. Members of the Cabinet met with Francis after the meeting.

The Pontiff was accompanied by Cardinal Secretary of State Pietro Parolin and Secretary for Relations with State Msgr. Seamus Horgan.

“The visit of President Benigno Aquino with Pope Francis at the Vatican is significant because it is a way of returning the thoughtfulness of the Holy Father in making a special journey to the Philippines. The President’s visit is also a reminder to his Holiness that our thoughts and prayers are with him,” Tuason told Radio TV Malacañang.

President Aquino said that at their meeting, the Pope “listened and listened to me,” adding that he also tried to speak in Spanish a little, but mainly both relied on their interpreters.

Mr. Aquino said he and the Pope talked about the rehabilitation of communities devastated by Supertyphoon “Yolanda” (international name: Haiyan) in 2013 and the government’s antipoverty and social services programs.

“We also spoke about the reality that there are times when the Church and the State do not agree. So I asked the Pope, how do you encourage dialogue?” President Aquino said.

As a response, the Pope gave him an encyclical and an apostolic exhortation to read.

These were Francis’ encyclical on the environment, “Laudato Si (Praise Be to You),” and his apostolic exhortation, “Evangelii Gaudium (Joy of the Gospel: Apostolic Exhortation on the Proclamation of the Gospel in Today’s World).”

The Pope also gave President Aquino a bronze sculpture of an olive branch holding the two halves of a cleft rock, which symbolizes peace and unity.

“The stone is broken in the middle but the roots are crossing each other, so the idea of being conciliatory, consensus builder is what is being emphasized by this particular sculpture,” Mr. Aquino said.

In turn, President Aquino gifted the Pontiff with a porcelain tea set made by Filipino craftsman Ito Kish. The cups and saucers bear details from Philippine cultural life such as the nipa hut, carabao and coconut tree.

The President also gave the Pope a box of fresh mangoes.

After meeting with the Pope and Parolin, the President attended the unveiling and blessing of the Mosaic Image of Our Lady of Peñafrancia at the Vatican Gardens.

The Philippines is the 10th country to have its own nationally venerated image of the Virgin Mary installed at the Vatican Gardens. The image was created by Italian mosaicist Roberto Cassio, known for the restoration of centuries-old mosaics.

Cassio is also in charge of the Laboratory of Mosaic Restoration in the Vatican Museums.

“Filipinos [here] are really very, very devoted to our Lady of Peñafrancia. And they are paying for everything. The Filipinos in Manila send us money to pay for the mosaic,” Tuason said.

Read Next
Aquino bats for Roxas in Rome
EDITORS' PICK
Smart poised to turn PH into ‘Smart 5G country’ with nationwide rollout
Feud is over: Velasco next Speaker on Oct. 14
Duterte meets with Cayetano, Velasco amid speakership issue
Get 80% OFF Ignite 2020 Cyber Tickets starting 28 September
House to probe Facebook takedown of gov’t accounts
Water remains our saving grace right now
MOST READ
Velasco to take over as Speaker on Oct. 14
‘I offered to resign’ because of endless corruption, says Duterte
Gun attack in PMA: Air Force man killed, 2 others wounded
LOOK: The Mountain from ‘Game of Thrones’ welcomes first son with wife
Don't miss out on the latest news and information.