Pope Francis asks Aquino, PH to pray for him

VATICAN CITY— When the two leaders met at the Apostolic Palace on Friday morning, Pope Francis asked President Benigno Aquino III and the rest of the Philippines to pray for him.

“I went to the meeting more as a Catholic talking to the head of the Catholic Church than being a head of state,” President Aquino told the Philippine media delegation that covered his weeklong working visit to Paris and Italy.

President Aquino said he found it difficult to explain what he felt when he met with the Pope.

FEATURED STORIES
GLOBALNATION
Niece extols Filipino nurse who died alone while in quarantine in UK
GLOBALNATION
COVID-19 goodwill: Russia thanks PH for saving tanker captain’s life
GLOBALNATION
Filipinos get option to stay in Cambodia, which has zero COVID-19 death, or return to PH

“He is a very simple person who greets you immediately with a smile… When we are face to face with the Pope, we always ask to be blessed by him, for him to pray for us. But the Pope had only one message for us: that is to pray for him,” Mr. Aquino said. 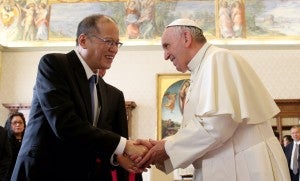 “When he said ‘pray for me,’ I told him, ‘Holy Father, I think in the Philippines even those who are not Catholics pray for you and I’m sure that continually happens’,” the President added.

Mr. Aquino said that with the media’s help, he hoped that this message of Francis would reach all Filipinos.

The President also said the matter about Davao City Mayor Rodrigo Duterte cussing the Pope was not at all brought up at their meeting.

“To be honest, I didn’t personally hear what Mayor Duterte said. I just saw what was written in the news reports about what he supposedly said…. Perhaps I should leave it at that,” President Aquino said.

READ: Duterte ‘curses’ at Pope Francis, Lacierda fires back / Duterte denies slur on Pope: I was cursing gov’t incompetence / Archbishop hits Duterte: Corruption is a devil with many faces

President Aquino’s trip to the Vatican was a reciprocal visit to the state visit made by Pope Francis to the Philippines last January.

The Pope gave special attention to the survivors of super typhoon Yolanda during his trip, and went to Tacloban City despite the threat of another typhoon.

Because of the special concern of the Pope for the survivors of the deadly typhoon, President Aquino updated the Pontiff on the post-Yolanda rehabilitation efforts government continues to undertake.

The Pope and Mr. Aquino also spoke about the government’s anti-poverty and social services programs.

President Aquino is set to return to Manila at 5pm Friday (12 midnight Saturday in Manila). He is expected to arrive at the Ninoy Aquino International Airport at 1:55 pm Saturday (Manila time).

No roaming: ‘Barangays with no cases must be protected to the max’ – Garbin