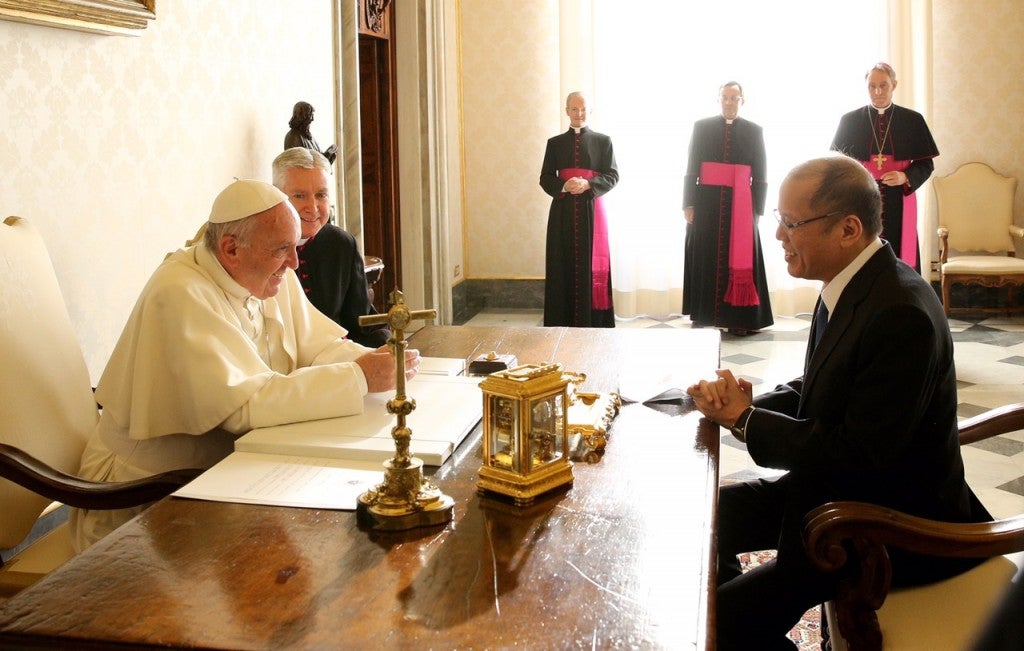 VATICAN CITY—President Benigno Aquino III on Friday said the Vatican’s Secretary of State, as well as the leaders of Italy, expressed their belief that the Philippines’ peace process was an “example” of how to reach out to Muslim brothers in achieving peace in the spate of extremism that has become a worldwide threat.

President Aquino earlier this week met with Italian President Sergio Mattarella and Prime Minister Matteo Renzi who both congratulated him for the progress that the peace process in Mindanao despite the Bangsamoro Basic Law (BBL) remaining stalled in Congress.

The President also discussed the problem of extremism with the two Italian leaders.

The President and Parolin met following the private audience Mr. Aquino had with Pope Francis.

Mr. Aquino is set to leave Rome for Manila at 5 pm here (12 midnight Saturday in Manila), following a week-long working visit to Paris, Rome and the Vatican.

“He said that we can serve as an example of how to reach out to our Muslim brothers and achieve peace especially in the spirit the extremism is such a threat worldwide that example might be useful to others to build upon as a response to the radicalization that is happening,” the President told reporters.

The Vatican Radio, quoting a press statement from the Holy See Press Office, said that “particular attention was given to the state of the peace process in the Mindanao—located in the south of the country—with the hope of being expressed that the commitment of the parties can guarantee a stable and lasting peace in the region.”

President Aquino said he explained to the Cardinal that the Philippines does not have the “problem of radicalization that exists in other parts of the world.”

“I emphasized for instance that we never had an incident of suicide bombing. I talked again about my mantra about freedom from hunger and having some benefit by joining in the system, which has not been addressed in the past as the keys to bring them into the fold so to speak,” he said.

“They want a change in the system. But hopefully will address all the complaints, all the feeling of disenfranchisement that has existed in this part of the country,” he said.

The President also said he told Parolin that groups like the Abu Sayyaf, which claimed to have links with the al-Qaeda terrorist network, and now with the Islamic State, were “more a bandit group rather than a religious ideological group.”

“And we are hoping that it doesn’t go to that direction that is why continuous efforts are done,” he said.

Aquino to meet Filipinos in Italy in historic and rare visit