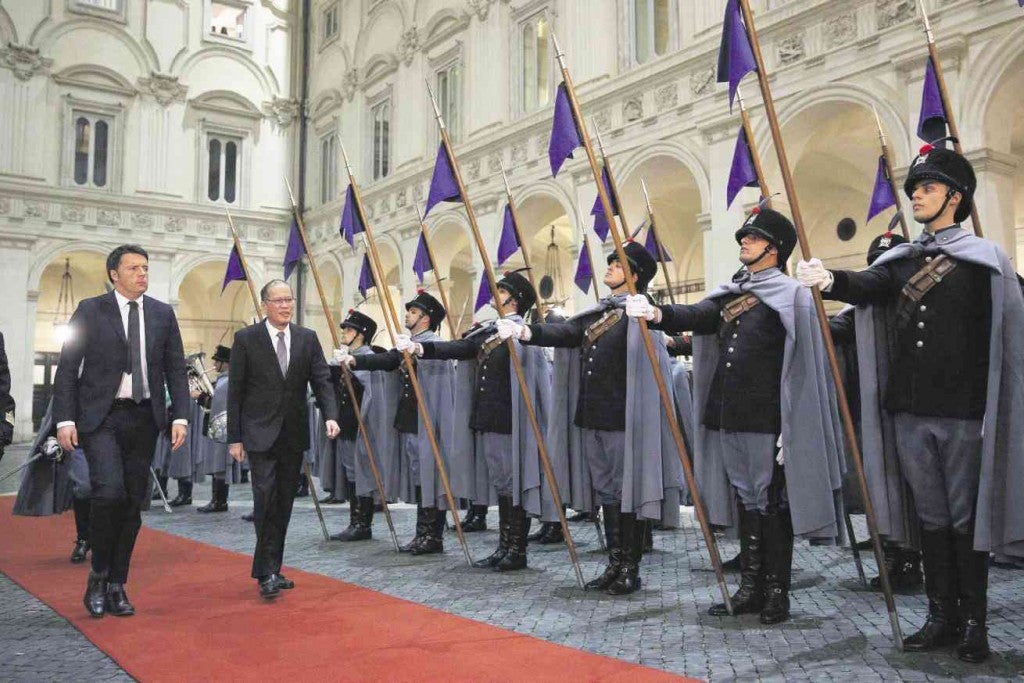 ROMANESQUE PAGEANTRY President Aquino and Italian Prime Minister Matteo Renzi at the courtyard of Palazzo Chigi on their way to a bilateral meeting. Mr. Aquino is on an official visit to Rome where among notable trade agreements inked was the direct Manila-Rome, Rome-Manila air services. MALACAÑANG PHOTO

ROME—The Philippines has found another supporter of its decision to take its territorial dispute with China in the South China Sea to the United Nations for arbitration, with Italy’s top leaders telling President Benigno Aquino III that it is the “appropriate path to a peaceful dispute resolution.”

In the hourlong meeting with Mr. Aquino, Mattarella voiced Italy’s support for the Philippines’ adherence to the United Nations Convention on the Law of the Sea (Unclos) “in upholding freedom of navigation,” acknowledging that “the Philippines has taken an appropriate path to a peaceful dispute resolution.”

READ: Why the Unclos is important to the West Philippine Sea dispute

Renzi expressed the same support for the Philippines’ decision to bring the case to the UN Permanent Court of Arbitration in The Hague.

President Aquino explained to the Italian leaders the Philippines’ efforts to end the secessionist movement in Central Mindanao and put in place lasting peace through negotiation.

The proposed Bangsamoro Basic Law (BBL) remains stalled in Congress, but Mattarella and Renzi still congratulated President Aquino for his efforts to bring peace in Mindanao.

On the trade front, Mattarella and Renzi praised the Philippines for its successful hosting of the Asia-Pacific Economic Cooperation (Apec) summit last month as well as having a reliable and hardworking people, 171,000 of whom are working in Italy.

Renzi, a former mayor of Florence, had high praises for how Filipinos in that city “integrated well and exemplified values of community.”

President Aquino will meet with the Filipino community here at 5:30 p.m. on Thursday (12:30 a.m. Friday in Manila).

Mr. Aquino thanked the Italian leaders for Italy’s support for the Philippine military’s modernization program, particularly for the Italian government’s assistance in the purchase of Augusta helicopters, which are primarily used for disaster and relief operations.

President Aquino also expressed gratitude for the Philippines-Italy Debt for Development Swap Program where outstanding Italian bilateral credit were converted to funding for new development projects that focused on environmental protection and poverty reduction in the Philippines.

The Philippines and Italy initialed an air services agreement before the meeting between President Aquino and Matarella, said Communications Secretary Herminio Coloma Jr., who is traveling with Mr. Aquino.

Coloma said Mr. Aquino and Mattarella discussed the importance of the air services agreement, which would “benefit Filipino nationals and their families who work and reside in Italy and Europe by affording them the option to take direct flights back to the Philippines.”

The agreement is designed to enhance tourism and encourage business travel to and from Italy and the Philippines, as both countries agreed to increase frequency of passenger and cargo flights.

President Aquino also discussed with Renzi the Philippines’ becoming a manufacturing base for export products to the European Union with Generalized System of Preference Status (GSP) status, under which the Philippines could avail itself of reduced tariffs,  among other things.

The European Union granted the Philippines GSP+ status last December, providing duty-free entry to the EU for some of the most important Philippine exports, Malacañang said.

“The greatest benefit from GSP+ is the attraction of new industrial investments in sectors where relatively high tariffs are slashed to zero under GSP+. These include Filipino exports that are labor intensive such as pineapple juice, garments, preserved fruits, tuna, fruit jams, jellies and footwear,” a statement from the Palace said.

Mr. Aquino and Mattarella met at 5 p.m. at Quirinal Palace, the Italian president’s official residence in Rome where he was given military honors.

An hour later, Mr. Aquino headed to Palazzo Chigi for his meeting with Renzi.

Aside from the Philippines’ territorial dispute with China, the leaders also discussed the threat of radicalization, the progress in the Mindanao peace process, the European Union’s migrant crisis, and enhancing the trade and investment partnership between the Philippines and Italy.

Mattarella congratulated Mr. Aquino, who steps down in June, for his government’s anticorruption efforts.

With Rome being under heavy guard by the military and the police, President Aquino’s meetings with Mattarella and Renzi underscored the threats posed by radicalization and global terrorism.

Mr. Aquino and Mattarella discussed the global campaign against terrorism, emphasizing how important it is for the world “to exert efforts toward deradicalization.”

Armed soldiers were on foot patrol while Roma Polizia cars were posted in strategic spots in the Italian capital as well as at the ancient and historic places in the city.

After the Paris terror attacks three weeks ago, groups of men and women huddled immediately raise suspicion. Security agents are not taking chances.

At the Colosseum, the Inquirer saw two policemen, with two armed soldiers nearby, ask a group of young men to show identification cards after they converged for several minutes, talking and laughing among themselves. With a report from Tarra Quismundo in Manila

Aquino to meet Filipinos in Italy in historic and rare visit