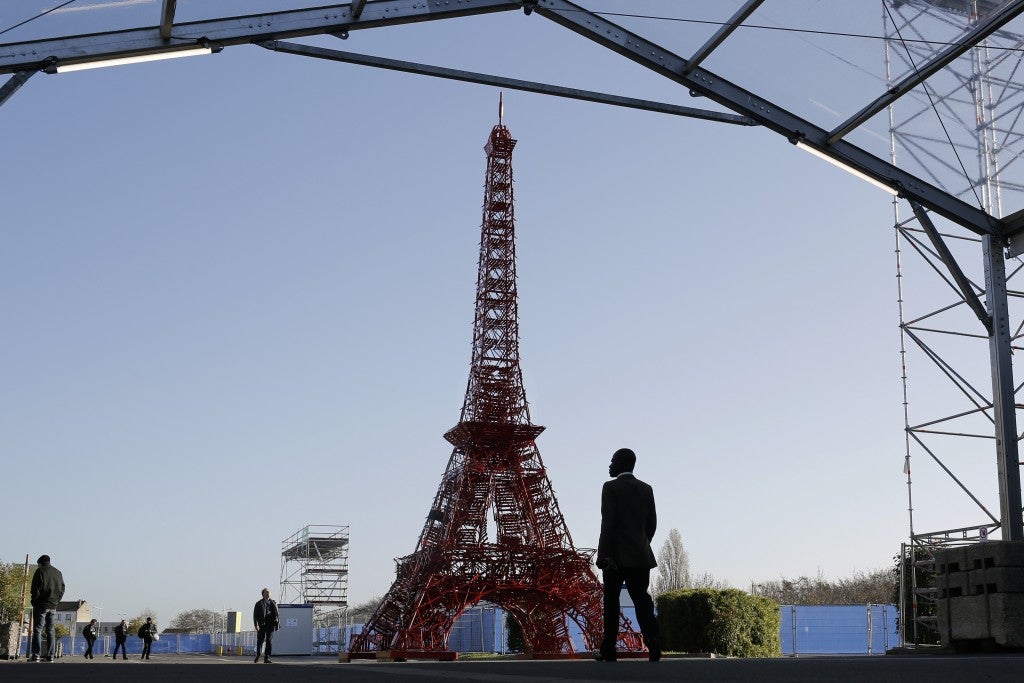 People walk in front of a reproduction of the Eiffel tower at the United Nations Climate Change Conference in Le Bourget, outside Paris, Saturday, Nov. 28, 2015. The site of Paris-Le Bourget will officially become United Nations territory for the COP 21 conference which is scheduled to start on Nov. 30. AP

Under heightened security two weeks after the deadly Paris attacks, some 150 heads of state and government will launch on Monday a highly anticipated United Nations conference tasked with inking a post-2020, 195-nation climate rescue accord.

Thousands turned out for climate change marches in Manila and Brisbane yesterday, part of a weekend of action across the globe to demand results from the historic Paris summit, the 21st Conference of Parties (COP21) for the United Nations Framework Convention on Climate Change.

Religious clergy, students and activists marched through Manila calling for curbs on emissions to mute the impact of climate change, which is blamed for a spike in typhoons and extreme weather that has wreaked havoc on the nation.

The march, attended by more than 2,500 people according to police, was one of a number of events scheduled in different parts of the country.

The Philippines has been identified as one of the most vulnerable countries to climate change.

It is hit by at least 20 typhoons every year. Two years ago, Supertyphoon “Yolanda” (international name: Haiyan) swept across the Visayas, leaving more than 3,500 people dead or missing and more than 4 million others homeless.

“Protect our common home,” and “climate justice,” were written on the placards held aloft by the surging crowd.

“We are marching in the Philippines because it is about our survival. Thousands of Filipinos have lost their lives because of climate change,” said Lidy Nacpil, coordinator of Asian People’s Movement on Debt and Development.

“We want to send a message to the rest of the world, especially the world leaders at the climate talks, to say that our survival is not negotiable,” said Denise Fontanilla, spokesperson for the movement.

“At the minimum, a viable climate deal must have deep mandatory cuts in greenhouse gas emissions by all developed countries and the big emerging economies,” former Akbayan Rep. Walden Bello said in a statement issued during the march.

The EcoWaste Coalition called on the government to include zero waste programs in priority mitigation plans and “shun deceptive solutions such as waste-to-energy incineration.”

In Australia, where Melbourne on Friday kicked off the weekend rallies, some 5,000 people gathered in the northeastern city of Brisbane for a march led by Aboriginal and Pacific islander representatives and youth groups.

“We are walking together because we know what it’s like to protect our country,” said Larissa Baldwin, from an indigenous climate youth network.

Pacific islands are particularly at risk from the fallout of climate change, especially rising sea levels.

“These are people that are calling for a just transition to renewable energy,” Baldwin told Agence France-Presse (AFP).

Sen. Larissa Waters from the Greens party said the turnout, after tens of thousands marched in Melbourne, showed the strength of opposition to plans to develop more of Australia’s vast coal deposits.

Thousands also rallied across New Zealand, in the main city of Auckland and at the parliament in Wellington.

Speaking outside parliament, Anglican Bishop Justin Duckworth said all citizens had a responsibility to protect the planet.

“I don’t want my future generation to clean up my mess. It is my responsibility,” the NZ Herald quoted Duckworth as saying.

In Tokyo, around 300 people gathered for a rally urging the adoption of clean, renewable energy—a call that has grown since a tsunami swamped the Fukushima nuclear power plant in 2011, sending three reactors into meltdown.

“Japan must take the lead in the summit to promote renewable energy because Japan is a rare country that has experienced such a big disaster,” rally organizer Daigo Ichikawa told AFP.

In Bangladesh, more than 5,000 people took part in climate marches across 30 different locations in the impoverished country that is exposed to rising seas, superstorms and expanding deserts.

Marches in other cities

Organizers in Paris expected hundreds of thousands to take to the streets yesterday in Asian cities as well as Johannesburg and Edinburgh, with similar events set for today in Seoul, Rio de Janeiro, New York and Mexico City.

Authorities canceled two rallies in Paris following the onslaught by gunmen and suicide bombers at restaurant terraces, a concert hall and the national stadium on Nov. 13.

Activists plan to create a 2-kilometer human chain along the original march route today. They will break the chain as they pass the Bataclan concert hall, where the worst violence claimed 90 lives, as a mark of respect to the victims.

They also plan to leave scores of shoes on Place de Republique square to symbolize the thousands left frustrated in their plans to march.

One pair of shoes will be placed on behalf of Pope Francis, inscribed with his name and the name of the encyclical he issued earlier this year on the threat of global warming, “Laudato Si” (Praise Be to You).

Billions of dollars in environmental aid were announced on Friday as cities worldwide prepared for marches to pressure leaders heading for Paris to negotiate an accord to tame global warming.

In Ottawa, the Canadian government announced climate funding of $1.98 billion over the next five years, while the 53-nation Commonwealth bloc agreed to set up a billion-dollar “Green Finance Facility” for environmental projects.

French President François Hollande, addressing the Commonwealth summit in Malta as head of the climate conference’s host nation, called for humanity to unite in the fight against global warming.

“Man is the worst enemy of man. We can see it with terrorism,” said Hollande, who spoke after leading ceremonies in Paris to mourn the victims of the Nov. 13 attacks.

“But we can say the same when it comes to climate. Human beings are destroying nature, damaging the environment. It is therefore for human beings to face up to their responsibilities for the good of future generations,” Hollande said.

UN Secretary General Ban Ki-moon, who attended the meeting in the Maltese capital Valletta, said he was encouraged “by such a strong commitment” by Commonwealth leaders.

“This is virtually the last political milestone before we meet in Paris,” Ban said.

The goal of the Paris talks is to limit average global warming to 2 degrees Celsius over pre-Industrial Revolution levels by curbing fossil fuel emissions blamed for climate change.

Last week, the United Nation’s weather body said the average global temperature for the year 2015 was set to touch the halfway mark at 1 degree Celsius.

The Paris conference will gather some 40,000 people, including 10,000 delegates from 195 countries, plus journalists, observers, scientists, exhibitors and visitors.

The summit will operate like a temporary town over the coming two weeks—providing work space, food and protection for its guests, including heads of state and government. Reports from AFP and Erika Sauler

Aquino in Paris for climate talks, unity vs terrorism