Aquino in Paris for climate talks, unity vs terrorism 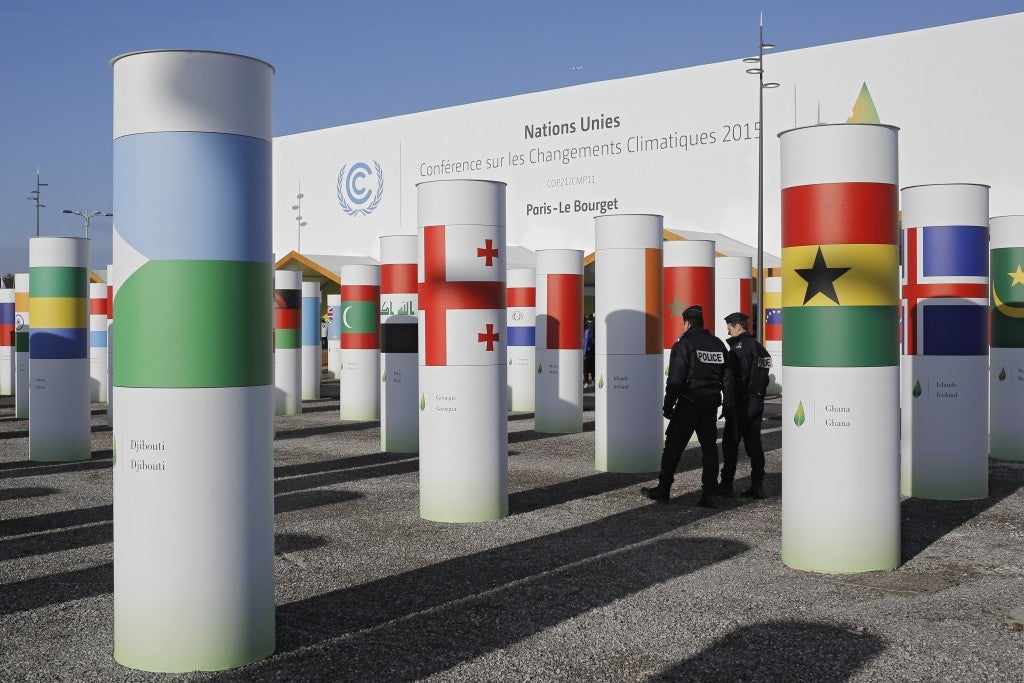 Policemen patrol outside the main entrance of the United Nations Climate Change Conference in Le Bourget, outside Paris, Saturday, Nov. 28, 2015. The site of Paris-Le Bourget will officially become United Nations territory for the COP 21 conference which is scheduled to start on Nov. 30. AP

PARIS—President Benigno Aquino III arrives here tonight to take part in a worldwide effort to fight climate change, representing the Philippines as one of the countries that have experienced the worst destruction brought by natural calamities attributed to global warming.

The 21st Conference of Parties (COP21) for the United Nations Framework Convention on Climate Change, which opens on Monday, also serves as a venue for the world to show it does not cower in fear despite threats from extremists.

World leaders proceed to Paris to demonstrate “solidarity and support” to France where three weeks ago, Islamic State (IS) group militants killed more than 129 people in simultaneous attacks on six places.

A Department of Foreign Affairs official said the French government had taken measures to ensure the safety of all the leaders, including President Aquino, attending the COP21 Leaders’ Meeting.

“We have been informed that it’s all systems go as far as the hosting of the COP21, and all security measures have been taken very carefully and seriously by the French government to ensure the safety of all the participants in the high-level event,” Assistant Secretary Maria Cleofe Natividad said.

Aside from President Aquino, US President Barack Obama, Russian President Vladimir Putin, Chinese President Xi Jinping and British Prime Minister David Cameron are among the more than 100 world leaders expected to be at the crucial climate change summit.

Paris and the rest of Europe have been on high alert following the Nov. 13 terrorist attacks on Paris that also left 352 people wounded.

“The President did not waver in spite of this horrific event… The President is even more determined to go to Paris to attend the COP21, a show of solidarity and support for the French government,” Natividad said.

At the Leaders’ Event, President Aquino’s brief speech would focus on the Philippines’ efforts at disaster mitigation, but he is also expected to push for the inclusion of the protection and promotion of human rights, indigenous peoples, and women and children in the legally binding agreement among nations that would try to slow down global warming.

That failure is not an option in Paris has almost become a slogan for every nation, including the Philippines, especially after the Copenhagen climate change summit in 2009 that failed to achieve anything significant.

Obama has been famously quoted as describing the Copenhagen summit as a “disorganized mess.”

“We are hopeful that there will be an agreement on climate change actions. The French presidency is working very hard toward a consensus among parties and to ensure the success of this conference because failure of this process is not considered an option. We must succeed if we really are to serve humanity and save the planet,” said Emmanuel de Guzman, a member of the Climate Change Commission and head of the Philippine delegation to the Paris summit.

The Philippines is this year’s chair of the CVF, a group of countries highly vulnerable to the effects of climate change.

The CVF presented the results of its recent senior officials’ meeting in Manila to President Aquino, among which is a campaign to keep global warming temperature at lower than 1.5 degrees Celsius, less than the 2 degrees being pushed for in the draft Paris agreement.

The CVF argued that more than a billion people in vulnerable countries “are already suffering serious consequences even at just a global warming temperature of 0.85 degrees Celsius.”

It said COP21 was opportunity for a “climate-secure framework to keep warming below 1.5 degrees Celsius.”

In Manila, Presidential Communication Secretary Herminio Coloma Jr. said President Aquino’s participation in COP21 was important because the Philippines was among the countries vulnerable to climate change.

Speaking on state-run radio, Coloma said the President was also expected to meet with businessmen during his two-day stay in Paris.

The President’s next stop is Rome where he will meet with Italian President Sergio Mattarella for discussion of bilateral matters, including the Mindanao peace matters, agriculture and agrarian reform, Coloma said.

He said an air services agreement between the Philippines and Italy would be signed during the meeting.

Mr. Aquino’s last stop, Coloma said, is the Vatican where the President will meet with Pope Francis in return for the Pontiff’s visit to the Philippines in January.

“He will express the country’s . . . gratitude for the benefits [from] the Pope’s visit . . . and for [the Pontiff’s continuing] support for families and communities affected by Supertyphoon ‘Yolanda,’” Coloma said. With a report from Gil C. Cabacungan

Failure not an option for PH delegation to Paris climate talks

Read Next
Teaching microbiology in Ethiopia
EDITORS' PICK
DOH: Too early to say COVID-19 cases are declining
Duterte praises military but slams police for poor discipline, corruption
Acer starts the year off strong with the Aspire Vero National Geographic Edition
The best of bayside and city living at SMDC’s Sail Residences
COVID-19 cases surging in all regions and provinces, says DOH
Over 3 Million worth of prizes to be won at Smart Padala’s SENDali Manalo Promo!
MOST READ
PBA gets crucial call from GAB for go signal under different setup as reboot of Governors’ Cup could come earlier
Marcos Jr. visits Cebu, stands as ‘ninong’ to mayor’s son
Djokovic has to comply with rules to go to Spain, PM says
Comelec is confident candidates will join debates, says spox
Don't miss out on the latest news and information.