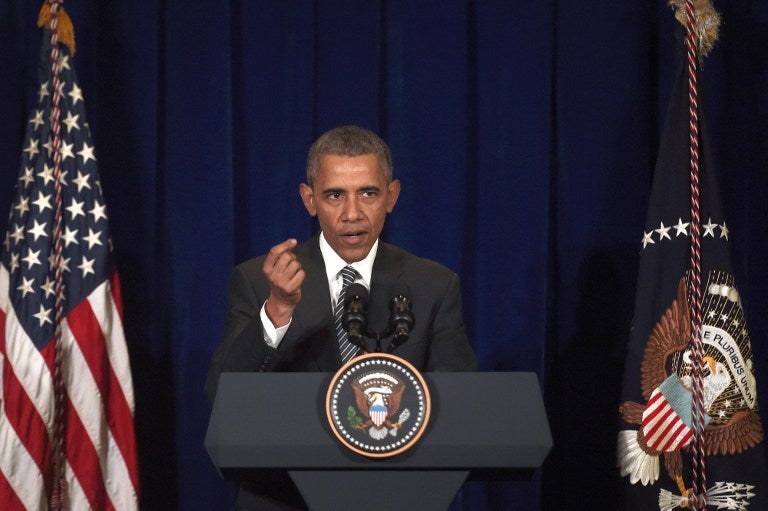 US President Barack Obama speaks during a press conference in Kuala Lumpur on November 22, 2015, on the sidelines of the 27th Association of Southeast Asian Nations ( ASEAN ) Summit. Obama and his counterparts from China, India, Japan and elsewhere are meeting in Kuala Lumpur for two days of talks hosted by the 10-country ASEAN. AFP PHOTO / FRED DUFOUR / AFP / FRED DUFOUR AND FRED DEFOUR

US President Barack Obama insisted Sunday he would go ahead with a visit to Paris for world climate talks despite the deadly attacks there, urging other leaders to attend and show “we are not afraid” of extremists.

“I think it’s absolutely vital for every country, every leader, to send a signal that the viciousness of a handful of killers does not stop the world from doing vital business,” he said following an Asia-Pacific summit in Malaysia.

In addition to hunting down terrorists, missile strikes, curbing jihadist financing and other steps, “the most powerful tool we have to fight ISIL is to say that we’re not afraid”, he said, using one of the acronyms for the Islamic State group.

Over the past week Obama and other Asia-Pacific leaders have held successive summits in Turkey, the Philippines and Malaysia that have been overshadowed by the recent string of deadly extremist attacks.

The carnage in Paris, Lebanon and Mali has sparked calls by assembled leaders for a concerted international effort to stamp out Islamic State and other jihad groups.

Obama is among world leaders due in Paris for talks beginning November 30 and intended to reach a global climate change accord.

“We do not succumb to fear. That’s the primary power that these terrorists have over us,” he said.