Failure not an option for PH delegation to Paris climate talks 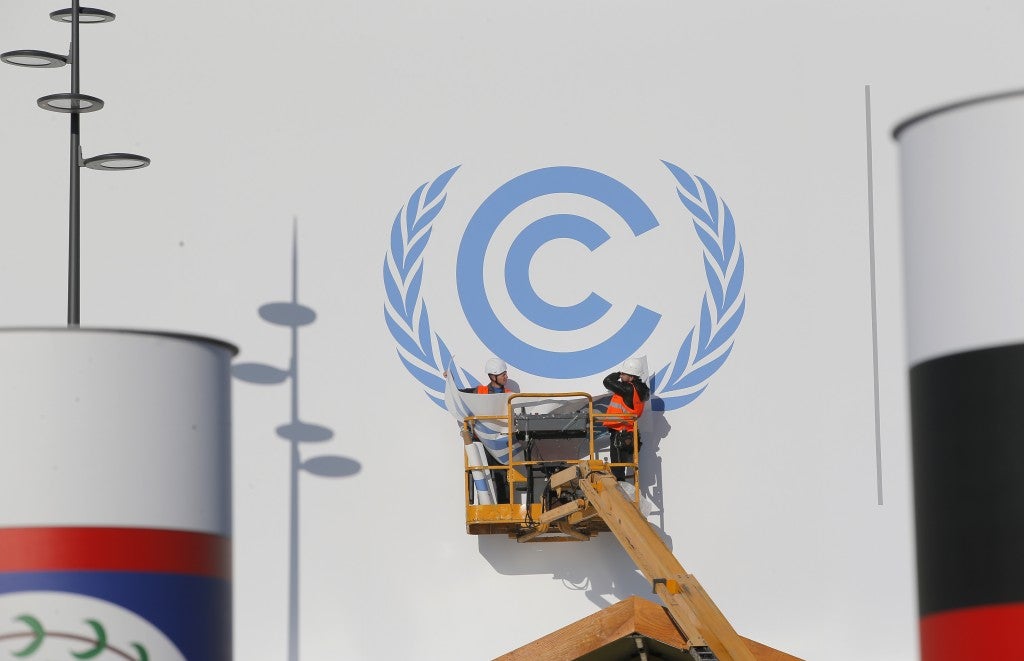 Workers install a logo on the facade of the UN Climate Conference in Le Bourget, outside Paris, Nov. 23. The conference with more than 100 heads of state is scheduled to start on Nov.30. AP

Failure of the crucial climate change talks in Paris this December is not an option for the Philippine delegation, which is determined to exhaust all options to “preserve humanity and save the planet.”

“We are not considering a failure scenario because so much is at stake,” said commissioner Manny de Guzman, acting head of the Climate Change Commission (CCC) and lead negotiator for the Philippines in the 21st Conference of Parties (COP21) from Nov. 30 to Dec. 11.

COP21 aims to ink a legally binding agreement among countries to reduce greenhouse gas emissions to two degrees Celsius above pre-industrial levels. If no agreement is signed, countries will be free to continue their “business as usual” approach, thereby driving up global temperature by more than five degrees.

“This is really the defining moment in our history. This agreement will essentially define the fate of humanity and our planet, our home planet. Are we allowing our planet to be very warm? Many islands are going underwater. Some nations are already thinking about migrating to other lands. This is a very basic human issue: Survival,” De Guzman said in a press conference on Wednesday during the 2015 Climate Change Consciousness Week at SMX Convention Center.

“The Philippine delegation is attending the COP fully prepared to negotiate and deal with any possible emergency scenarios,” he added. 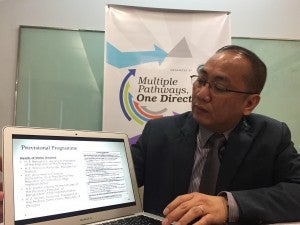 Climate Change Commission acting head Manny de Guzman is the lead negotiator for the Philippines in the 21st Conference of Parties or COP21 climate conference which will begin on Nov. 30 in Paris. SARA PACIA

All of these are “major” issues the Philippines is invested in, according to De Guzman, adding that the country will participate in all sessions, which will be held parallel to one another over the course of the event’s two weeks. Some members of the delegation have also negotiated for the Philippines in past COPs.

Representatives from civil society organizations, youth groups and professionals from the private sector who serve as advisers on climate change are also part of the Philippine delegation. Among those who will attend side events on behalf of the country are Sen. Loren Legarda, chair of the Senate committees on climate change and finance, and Albay Gov. Joey Salceda, who has been a member of the board of the Green Climate Fund since 2012.

Four other cross-cutting issues are also part of the Philippines’ focus: Equity, ambition, pre-2020 action and post-2020 financing. 2020 is the year the legally binding agreement, should it be signed, will take effect. Climate financing in particular is a sticky issue in this year’s talks.

Of the 196 parties part of the United Nations Framework Convention on Climate Change, only 154 submitted their Intended Nationally Determined Contributions (INDCs) accounting for 86 percent of all global greenhouse gas emissions. The Philippines has committed to reduce its emissions by 70 percent by 2030, subject to funding to be given to developing countries.

However, the current INDCs will only total a decrease of 2.7 degrees, still a far cry from COP21’s goal of below 2 degrees.

De Guzman said the Philippines, as current chair of Climate Vulnerable Forum (CVF), was lobbying for a lower goal: Below 1.5 degrees.

The CVF is a group of 20 countries that are most vulnerable to the effects of climate change. While not a negotiating bloc in COP, the CVF has come to be known as “poster boys” for the talks due to the increasing number of natural disasters aggravated by climate change that hit its members.

“The Philippines encourages all parties to come to a consensus on the outstanding issues of ambition, bearing in mind that with a better mitigation ambition the better it is for the preservation of people’s rights to life, health, water and sanitation, housing and self-determination,” De Guzman said.

While the negotiations in France will be De Guzman’s first COP, the country’s chief negotiator is optimistic that a legally binding agreement is within reach. The Philippines, he said, was fully prepared to do everything to ensure success.

Other countries also shared the Philippines’ optimism, De Guzman said, save for two or three countries that he declined to name.

French President Francois Hollande and UN Secretary Ban Ki-moon are set to formally launch COP21. President Aquino, who is among the hundred heads of state who will give a short speech on Nov. 30, will stay in Paris for a few days before proceeding to the Vatican to visit Pope Francis.

PH and climate change: Some areas for progress