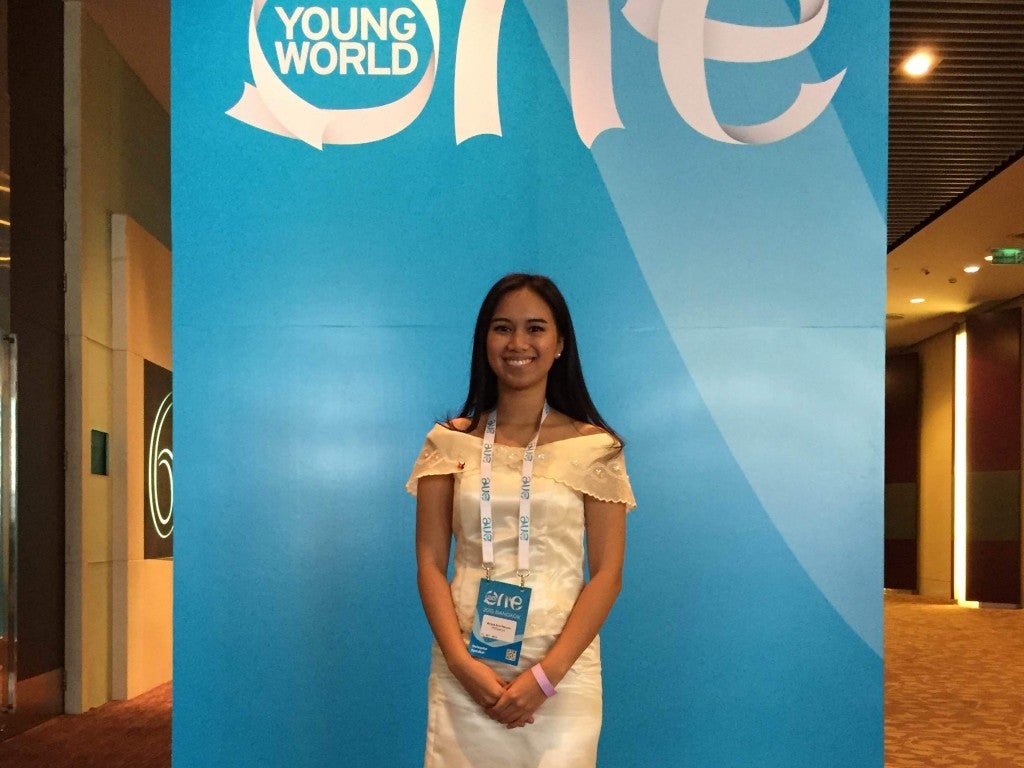 Arizza Nocum is not just a delegate, but a speaker at the One Young World summit, tackling peace and security as a young woman who has witnessed terrorism. IVAN ANGELO L. DE LARA

BANGKOK, Thailand—It was last year when 21-year-old Arizza Nocum learned about the One Young World summit, the largest forum of and by the youth in the world.

Learning that being a delegate to the event would cost her an arm and a leg, she applied for a scholarship to attend it, and was luckily chosen by a foundation which would support her trip.

On Saturday, she was not just a delegate, but a speaker in front of more than a thousand eager young people from all over the world, talking about peace and security, a cause which she has advanced for years as a young woman who has learned and witnessed terrorism.

Raised by a Muslim mother and a Christian father, Arizza said her parents have taught her that both religions could co-exist. And so, she has started a library open to young Muslims and Christians in order to bridge the gap between the two faiths and promote education.

“My family started building libraries to provide a venue not only for young people of different religions and backgrounds to come together but also to provide access to educational materials that are sparse in these areas,” Nocum said during her speech.

Her venture is called the Kris Library—a portmanteau of the words Christian and Islam.

“Since 2008, we have built six libraries around the Philippines. Three of our libraries are in a region where many terrorist camps are located, and where child soldiers are recruited,” she added.

The fifth-year engineering student at the University of the Philippines-Diliman said the project has narrowed the gap among the young children who would visit the library.

War is not the answer

Nocum ended her speech by making a call for youth and leaders to wage peace and empathy instead of war against terror.

“With every terror committed, our first response must not be war but empathy,” she said.

“The first step is to understand conflict and what drives it—poverty, injustice, and history. The second step is to create tangible expressions of empathy through dialog and cultural exchange and to build solutions that solve the backbone of conflict. The third step is to lobby against governments that wage war,” she explained.

Nocum acknowledged that others may not share the same opinion she has.

“To say to people that to wage war is not the best way to respond to terror is a bold thing to say. I was afraid that people might not agree with it,” she told INQUIRER.net.

Despite this apprehension, she still thinks that she is on the right side of things that’s why she is holding on to her stand on terror.

“This decision I have made now is a consequence of everything that I have learned so far. I feel right now, I am on the right side,” Nocum said.

Nocum said she hopes that delivering a speech at the One Young World summit would lead to dialogues in the Philippines regarding the peace and order situation in the country.

She said that she is in favor of the passage of the Bangsamoro basic law, but with reservations.

“If we were to solve the problem of conflict, and if we were to address the need for autonomy of Muslim Filipinos, the Bangsamoro law or a law would just be 10 percent of the solution,” she said.

The 90 percent of the solution, she explained, would come from valuing the history and heritage of Islam in the country, promoting interfaith dialogues and exposures, appreciating the Muslim culture, improving the economic state in Mindanao, and paving the way for a change in leadership in the Bangsamoro.

Admitting that she has not completely made up her mind yet on who to vote for in 2016, she urged her fellow youth to choose innovative and creative leaders.

“I want to have leaders who want to perform nation-building through a bottom-up approach by education, by providing venues for people to start business, by providing jobs that enrich people not just economically, but also intellectually and socially,” she said.

While she may have gotten several recognitions and the chance to address her fellow youth leaders, Nocum said she still has long way to go to advance her causes, whether it be peace and security, education or employment.

The phrase “silence please” may be a staple at libraries, but for the library she has built and the cause she wants to promote, Nocum’s voice cannot be restrained.