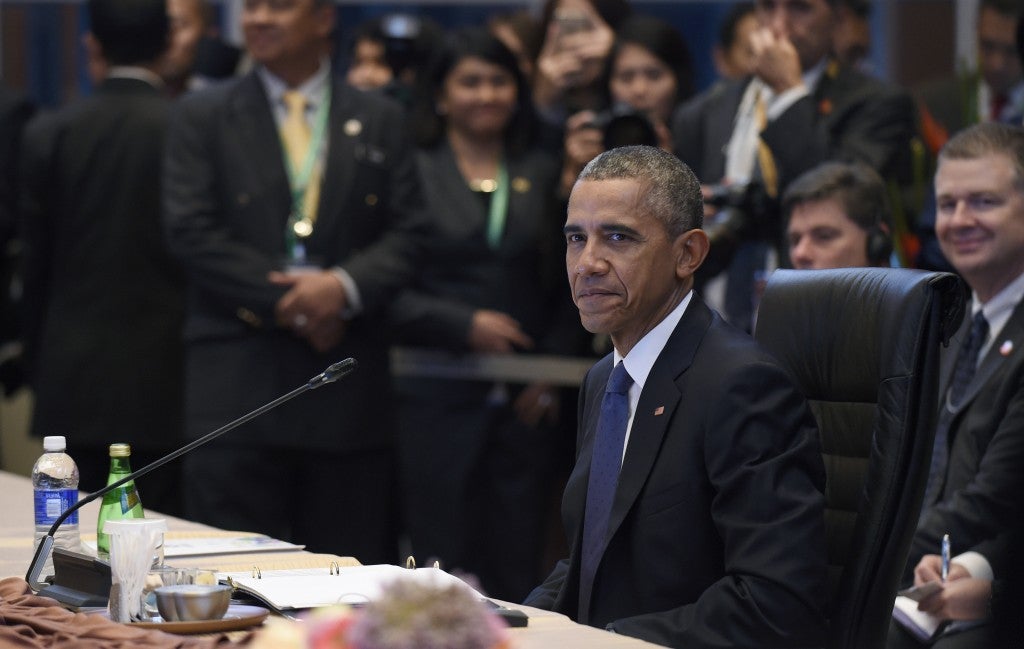 President Barack Obama waits for the media to leave after he spoke at a US-Asean (Association of Southeast Asian Nations) meeting in Kuala Lumpur, Malaysia, Nov. 21. Obama is in Malaysia where he joins leaders from Southeast Asia to discuss trade and economic issues, and terrorism and disputes over the South China Sea. AP

KUALA LUMPUR, Malaysia—Ten Southeast Asian heads of state and nine world leaders, including President Barack Obama, are meeting in Malaysia to discuss trade and economic issues. Terrorism and disputes over the South China Sea are also on the agenda. (All times local.)

The United States and Southeast Asian nations have pressed their call for freedom of navigation and overflight in the disputed South China Sea, in a veiled rebuke to China.

China has come under heavy criticism for recently transforming disputed reefs into islands in aggressive actions that have set off alarms in the region.

Following an annual regional summit in Kuala Lumpur, Malaysia, on Saturday, the US and the Association of Southeast Asian Nations also pressed for the peaceful resolution of the territorial conflicts “without resorting to the threat or use of force.”

This is standard language that Washington and its allies have used against China’s increasingly assertive stance in the disputed waters.

The joint US-Asean statement, however, did not mention China by name.

President Barack Obama has met with Prime Minister Thongsing Thammavong of Laos on the sidelines of a regional summit in Malaysia.

The two leaders shook hands and smiled broadly Saturday as their delegations watched on. They made no comments to reporters, who were allowed in briefly for the start of their meeting in Kuala Lumpur.

Next year, Obama will become the first US president to visit Laos, which will host the 2016 Association of Southeast Asian Nations conference.

Laos has moved away from a communist system in recent decades, but it retains a one-party political system and its government has been criticized for being intolerant of dissent.

President Barack Obama has met with some prominent critics of his host, Prime Minister Najib Razak of Malaysia, including a transgender gay rights activist.

Obama, attending an Asian summit, met Saturday with eight representatives of civil society groups who are fighting for civil liberties. They have faced government crackdowns for highlighting Najib’s role in a $700 million financial scandal involving a state investment fund.

Obama described them as outstanding and courageous people.

He said part of the reason that he wanted to meet with them was to send “a clear message” that the United States stands behind the important work they’re doing.

He said many civil society groups are concerned about restrictions on civil liberties and rights. Among those he met was Nisha Ayub, a transgender who is now a gay rights activist, Premesh Chandran, the chief executive of independent news website Malaysiakini, and Maria Chin, a human rights activist.

Najib’s government has in recent months arrested and questioned journalists who have written critical reports about the financial scandal. Police have also charged Chin, who earlier this year organized a massive antigovernment rally.

Modi said Saturday that India’s economy has improved since his government took office 18 months ago and implemented two rounds of structural and financial reforms.

He said the government is working to ensure a transparent and predictable tax regime, protect intellectual property rights through a new national policy due out soon and remove bottlenecks to make India the easiest place to do business.

However, he said reforms are “just a way station” on the long journey to transform India.

Modi told a business conference on the sidelines of a Southeast Asia summit: “We must reform to transform. Asean economies have done their bit for Asia’s resurgence. Now, it is India’s turn. And we know that our time has come. We are at a take-off stage. I invite you to come and see the winds of change in India.”

Southeast Asian nations have proposed creating a regional convention that would provide the legal framework to prevent human trafficking, especially women and children.

The leaders of 10 countries of the Association of Southeast Asian Nations made the commitment during their summit Saturday. In urging their ministers to work on the regional law, the leaders said that “victims of trafficking, mainly vulnerable women and children, have a fundamental right to be protected” in line with international laws.

The issue was highlighted earlier this year when hundreds of Rohingya, an ethnic Muslim minority of Myanmar, were found to have been trafficked through Thailand to Malaysia.

The leaders did not name the Rohingya problem specifically in their statement announcing the intention to create the Asean convention against trafficking to be known by its acronym ACTIP.

Some 100 Malaysian Muslim activists protested President Barack Obama’s visit to the Muslim-majority Southeast Asian nation, denouncing him as an enemy of Islam.

They chanted “Reject Obama” and held banners that read “O Terrorist, you are not welcome here,” and “America’s war of terrorism is a war against Islam.”

Prime Minister Shinzo Abe says Japan is the “best partner” for Asia as it gears up for a new growth phase toward lasting sustainable growth.

He says Japan is committed to bolster its overseas development assistance, and along with Asian Development Bank will provide $110 billion infrastructure financing over the next five years.

Abe was speaking Saturday at a business conference on the sidelines of a Southeast Asia summit.

He says Asia’s growth is about to transition to a new stage, which is a challenge in ensuring lasting growth.

He added: “We do not impose our culture on others … we think together and move together with the local people.”

For example, he said the recipe for Japanese ramen noodle has been modified in Malaysia by using chicken broth and meat, instead of pork, which is prohibited in Islam.

President Barak Obama has touted the Trans-Pacific Partnership trade agreement he recently struck with 11 other nations.

Obama said Saturday that the TPP would raise the bar for human rights and fight forced labor he said was akin to modern slavery.

Obama said: “This is a prime example of America and our partners working together to shape the world we want for future generations.”

He was speaking at a business summit, held on the sidelines of a summit of Southeast Asian countries.

Obama will attend a separate summit in Malaysia’s capital on Sunday that will include other Asia-Pacific countries.

President Barack Obama says the deadly assault on a hotel in Mali is yet another reminder that the “scourge of terrorism” threatens many nations.

And he says the “barbarity” shown by Islamic extremists at the Radisson hotel in the capital of Bamako “only stiffens our resolve to meet this challenge.”

The assault on the hotel came exactly one week after attacks coordinated by the Islamic State group left 130 people dead across Paris.

At least 20 were killed in Mali, including at least one American.

Obama says the US is working to account for Americans who may have been at the hotel. He also extended condolences to families of the victims, and thanked the security forces who responded.

He spoke in Malaysia during a regional summit.

Malaysian Prime Minister Najib Razak has opened a two-day regional summit with a call to defeat Islamic terrorism, saying its barbaric attacks do not represent any race or religion.

Najib was speaking Saturday at the summit of the Association of Southeast Asian Nations, a regional grouping of 10 nations that include the Muslim-majority nations of Malaysia and Indonesia. Indonesia, and the neighboring Philippines, which has a large Muslim minority, have been hit by Islamic extremism.

Najib referred to those two countries, as well as the attacks in Paris and Friday’s deadly hostage-taking in Bamako, Mali.

Najib says Malaysia stands ready to provide any help and support it can.

He says: “Be assured that we stand with you against this new evil that blasphemes against the name of Islam.”

Prime Minister Najib Razak of Malaysia has described Islamic State group as “evil” and a perverted form of Islam, as he and President Barack Obama pledged to fight Islamic extremism.

After a meeting with Obama late Friday, Najib said his government is very clear that it is against the IS, “its ideology, what it stands for.”

He says “it is evil. It is against Islam. It is a perverted Islam. And they do not represent us.”

Najib says Malaysia and the United States will work together and with other like-minded countries to make Southeast Asia safer.

Obama is in Malaysia to attend a regional summit that ends Sunday.

In his remarks, Obama said Malaysia, like Indonesia, is a majority-Muslim country that represents tolerance and peace. Obama said that as a consequence, “its voice is critical in the debate that is taking place internationally around terrorism.”

Heads of state from 10 members of the Association of Southeast Asian Nations have formally opened their weekend summit in the Malaysian capital of Kuala Lumpur.

The main event is the launch of a unified economic community that has been eight years in the making.

On Sunday, the leaders of Malaysia, Indonesia, Singapore, Brunei, Thailand and the Philippines, along with Asean’s four less developed members, Communist Vietnam and Laos, Myanmar and Cambodia, will sign a declaration establishing the Asean Economic Community, originally envisioned in 2002.

Although Asean has helped greatly increase the region’s economic and political integration, there is a long way to go before the AEC becomes fully functional after becoming a legal entity on Dec. 31.

Asean countries have torn down tariff barriers and have removed some visa restrictions, but they fall short in more politically sensitive areas such as opening up agriculture, steel, auto production and other protected sectors.