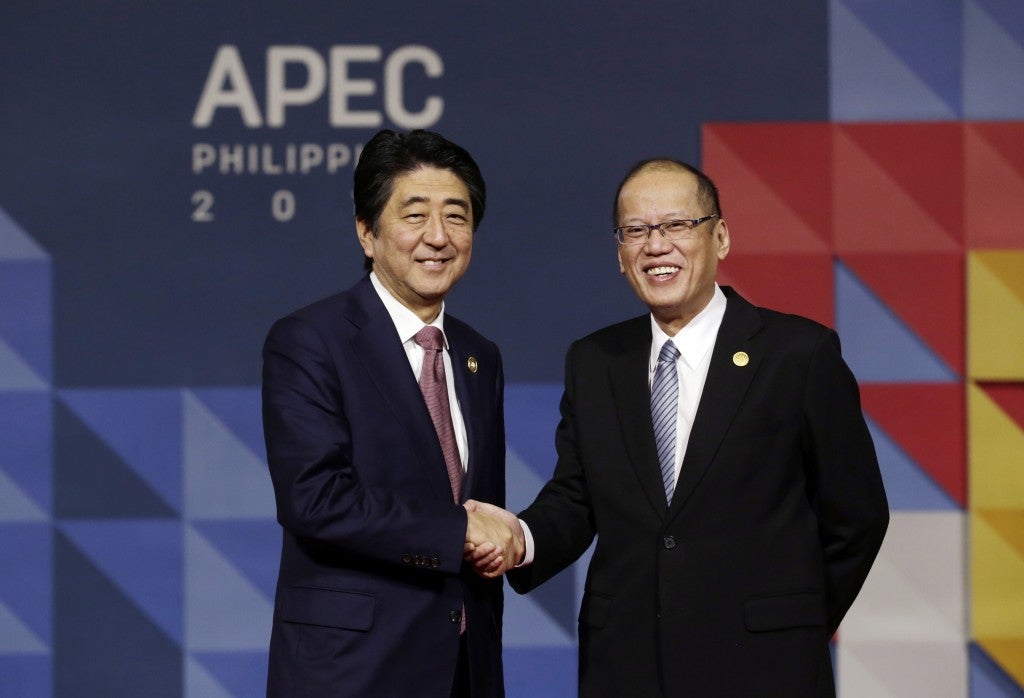 Japan will give the Philippines $2 billion in financing for a railway project and P121.9 million for agricultural projects in strife-torn Mindanao.

Japan may also consider a request from the Philippines for big Coast Guard ships to patrol the heavily disputed West Philippine Sea (South China Sea), after the two allies reached a deal on defense equipment and technology.

The deal will mark the first time Japan has agreed to directly donate military equipment to another country, and is the latest example of Abe’s more muscular security agenda.

The deals were reached during a meeting between President Benigno Aquino III and Japanese Prime Minister Shinzo Abe late on Thursday at the closing of the Asia-Pacific Economic Cooperation (Apec) summit in Manila.

In a news conference after the meeting, Abe said he and Mr. Aquino had a “candid exchange of views” on the security situation in the sea-lanes in the Asia-Pacific region.

“We shared these concerns over unilateral actions to change the status quo such as the large-scale land reclamation and building of outposts in the South China Sea,” Abe said.

“At the same time, we confirmed the importance of partnerships in the global community based on the rule of law to protect open, free and peaceful seas,” he added.

Abe did not specifically mention China, but it was understood that he was referring to China’s massive land reclamation on reefs in the sea to build artificial islands that it could use as military outposts from which to project its military might in the region.

China claims nearly all of the 3.5-million-square-kilometer sea and its island-building has rattled other claimants to territory in the resource-rich waterway, through which $5 trillion in global trade passes every year: Brunei, Malaysia, the Philippines, Vietnam and Taiwan.

The Philippines is the Southeast Asian nation most at odds with China over the sea, taking the dispute to the United Nations Permanent Court of Arbitration in The Hague and asking the tribunal to invalidate China’s expansive claim to the sea where islets, reefs and atolls are believed to be sitting atop vast oil and natural gas reserves.

Tokyo has no claims in the waterway, but worries about China’s growing military reach into sea lanes through which much of Japan’s shipborne trade passes.

Abe announced the deal in a statement issued after his meeting with Mr. Aquino.

“There was a request from President Benigno Aquino regarding the provision of large patrol vessels to the Philippine Coast Guard and Japan would like to consider the specifics,” Abe said in the statement.

He said he welcomed the deal and “agreed to work together for the early signing of the agreement and the realization of cooperation in defense equipment.”

There have been media reports that Tokyo would supply Manila with three used Beechcraft TC-90 King Air aircraft suitable for maritime surveillance in the South China Sea.

Rather than challenge Beijing directly by sending warships or planes to patrol the sea, Japan is helping to build the military capacity of friendly nations with claims to parts of the waterway.

“These negotiations take some time,” a senior Japanese official said, adding it could take one or two years before the two sides sign a deal on defense equipment and technology.

“Japan wants an assurance that any equipment it will give will not be transferred to a third country,” the official said.

To allow the donation, Japanese lawmakers will either have to tweak curbs on sales of government-owned equipment, or set up a separate financing mechanism.

Japan changed its defense policy this year in a shift that could let troops fight overseas for the first time since 1945. The move was welcomed by ally the United States, but led to concern in China, where memories of Japan’s wartime aggression run deep.

In his news conference, Abe said he supported the Philippine decision to seek UN arbitration to settle its territorial dispute with China.

He said President Aquino offered support for legislation of peace and security reforms. On his part, Abe said Japan would pursue its policy of proactive contribution to peace.

Abe cited the increasing cooperation between Japan and the Philippines, with a series of visits by the two countries’ leaders—President Aquino’s state visit to Japan last year; Abe’s visit to the Philippines this year, which included the seventh meeting between him and Mr. Aquino, and the visit of the Japanese Emperor and Empress to Manila early next year.

During their meeting on Thursday night, Abe and Mr. Aquino signed an agreement for the development of a $2-billion railway connecting Manila and Bulacan province and a deal that would resolve the double enrollment of expatriates in pension plans.

On top of these, Japan agreed to facilitate the employment of Filipino domestic workers in Japan and to provide $121.9 million for agricultural projects in Mindanao.

PH, Japan in talks over implementation of defense deal