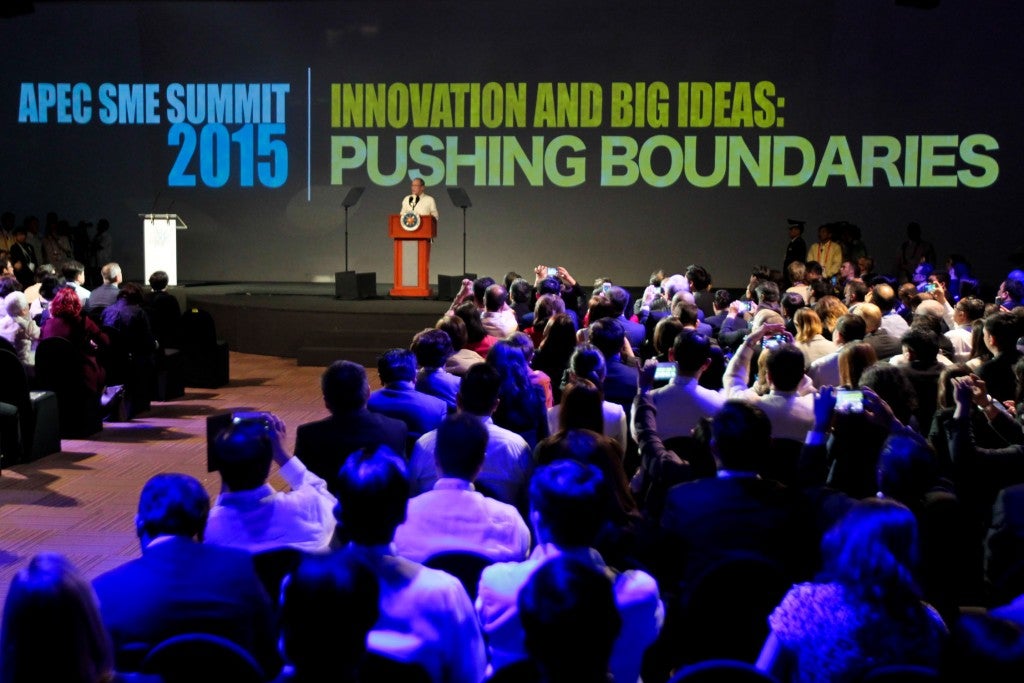 Senators on Friday lauded the just-concluded Asia-Pacific Economic Cooperation (Apec) summit for focusing not only on big business but also on micro, small and medium enterprises (MSMEs) as the organizers defended the security measures imposed on Manila during the regional leaders’ gathering.

Despite the public inconvenience caused by those measures, Sen. JV Ejercito hailed the Philippines’ hosting of the annual talks among the leaders of the 21 Asia-Pacific economies, which he said went off without a hitch.

Ejercito, a member of the opposition in the Senate, described the event as a “milestone” for Filipinos, as well as a triumph for President Aquino.

“I commend President Benigno Aquino III for managing the event well with no glitch, especially on the security aspects,” Ejercito, chair of Senate economic affairs committee, said in a statement.

But Legarda also said the true success of the Apec meetings would come when the commitments of the 21 member-economies bear fruit.

“The Apec meeting is sometimes difficult to relate to [for] ordinary citizens, that is why there are public outcries [over the] shutting down [of] Metro Manila for an event that is assumed to benefit only big businesses. However, the 2015 Apec leaders’ declaration will hopefully open new doors of opportunity for growth for the MSMEs, small businesses with big dreams,” she said in a statement.

That such a large global meeting gave priority to MSMEs is something that deserves praise, she added.

In the Philippines, MSMEs form the backbone of the economy, making up 99 percent of businesses in the country, she said.

In order to allow MSMEs to grow, Legarda said the government should also put in place a plan to reduce climate risks and build resilience. This would help prevent substantial losses resulting from natural disasters, she said.

According to Ejercito, the Philippines was in the spotlight during the summit, which also served as a direct and effective channel in getting foreign direct investment through the President’s meetings with the leaders of the other Apec economies.

He said, however, that he hoped the government’s hosting of the summit also helped it grasp the poor state of the country’s infrastructure, including transportation.

“Let us prepare well by investing more on our public infrastructure. This will provide international delegates with a better and lasting impression of the Philippines. By doing so, we will further boost our mark in the international community that will attract more and bigger foreign direct investment,” he said.

The government shut down Ninoy Aquino International Airport (Naia), stretches of major roads in Metro Manila and banned sailing on Manila Bay during the summit.

The next time the Philippines hosts the Apec summit, the government could consider holding it in other parts of the country with an international airport, Ejercito said.

“Metro Manila and Naia are too congested to handle such huge event,” he said.

She also said one way of dealing with climate change was switching to clean energy, another topic tackled by the leaders during the summit.

“Inclusive growth begins with making basic services available to all. Fostering the participation of micro, small and medium enterprises in the regional and global markets, much less in the domestic supply chain, will not happen unless energy access is guaranteed to everyone. Off-grid and last-mile communities need to enjoy the benefits of Apec as much as everyone else in urban areas,” she said.

Sen. Paolo Benigno “Bam” Aquino IV viewed Apec’s focus on MSMEs as a “stamp of approval” on the Senate’s push for measures to strengthen entrepreneurship in the Philippines.

Aquino, head of the Senate committee on trade, commerce, and entrepreneurship, said the statement of the Apec leaders recognizing the significance of MSMEs in poverty eradication and inclusive growth boosted his long-held belief and advocacy that empowering MSMEs could deal with poverty. 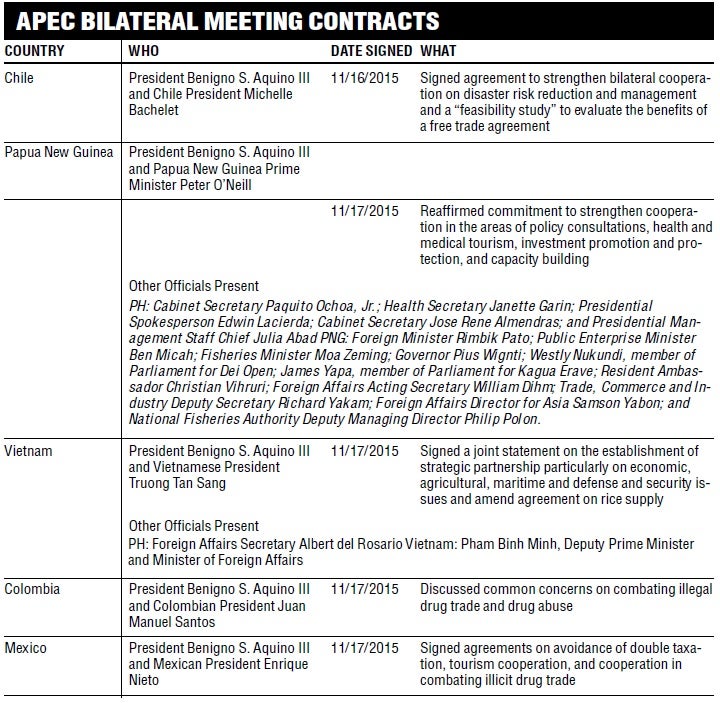 But Sen. Francis Escudero said he would ask the government to account for the P10 billion it spent to host the Apec summit.

Escudero said he would seek a breakdown of the government’s expenses and its arrangements with private sector partners when the Senate resumed hearings on the proposed P3-trillion budget for 2016.

“Let’s review what has been done, what was spent, and see the cost benefit, if it’s worth it,” Escudero said in a statement.

He said one of the expenses he would look into was the use of vehicles, provided by the different manufacturers, for the Apec delegates.

Escudero said the government may have spent more than

P10 billion, but the excess amount may not have been charged to the Apec expenditure.

Before 2015, there were already Apec-related expenditures, he said, including the building and fixing of infrastructure in Iloilo. Iloilo served as the venue for dialogues between Apec economies held since July.

Escudero said it would be difficult to assess if the funds that the government spent to host the summit would result in economic gains.

What is obvious is that the event served as a “huge encumbrance” to ordinary Filipinos, who got stuck in traffic or who had their flights canceled, he said.

Nevertheless, he said the Philippines should not turn down hosting Apec.

The Philippines should start preparing for when the rotating duty of hosting the Apec summit falls on its lap again after 18 years so that it can do away with the hassles that this year’s gathering caused, he said.

Only once in 20 years

Marciano Paynor Jr., director general of the Apec national organizing committee, said the inconvenience caused by the security measures should not be taken out of context.

“When we host, we know that we have to sacrifice a bit and we don’t host every year. In fact, the last time we hosted [Apec] was 19 years ago, so a little inconvenience—a little, comparatively speaking—big for some because they had to wait eight hours,” Paynor told reporters Thursday night.

“This kind of inconvenience, it’s a little sacrifice compared to the benefits that we will, in the years to come, gain out of [our] membership [in] Apec,” he said.

“If our attitude is, we [will be inconvenienced [so] we should not host; if we [don’t] host [then] we should not be [a member] of any multilateral organization,” he said.

Paynor said the government had foreseen massive traffic jams, the reason why it declared a two-day holiday.

The holiday covered government offices and schools to ease traffic, though rain worsened the situation, he said.

As to why Manila was chosen as site for the summit, Paynor said: “It’s because we don’t have a place with facilities that could accommodate 9,000 guests plus 2,000 something journalists— that’s 11,000 people. So where in the Philippines can you put in this concentration of people plus have the facilities like this media center to accommodate them, plus all the other meetings [and the] plenary, the retreat? [I]t’s difficult, really. It was a difficult decision, I am sure, but again we had no choice.”