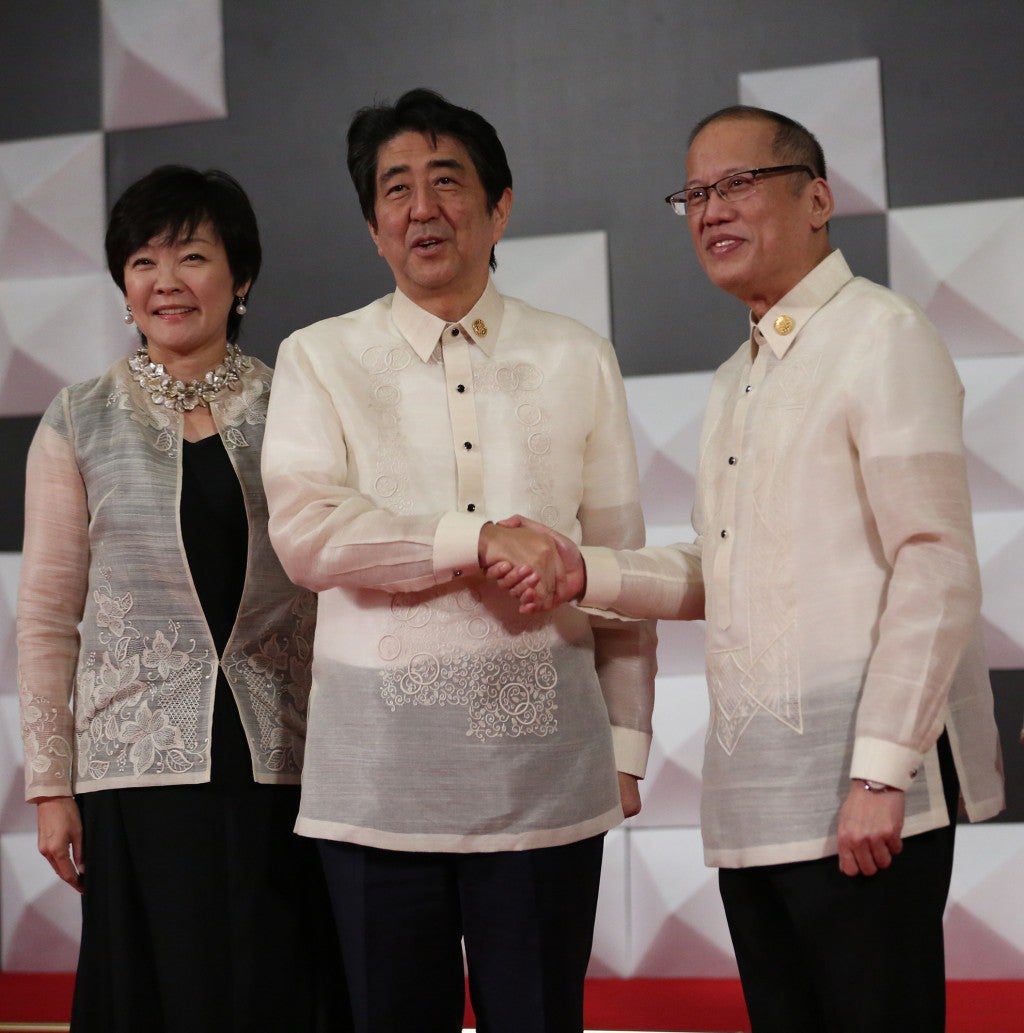 Japan’s Prime Minister Shinzo Abe is expected to issue a strong message opposing China’s unilateral activities in the East and South China Seas during a regional summit in Kuala Lumpur between the Association of Southeast Nations and eight of Asean’s partner nations, including Japan.

“He would like to give a strong message at the upcoming East Asia Summit (EAS) in order to preserve the open and free oceans,” Abe’s spokesperson and press secretary Yasuhisa Kawamura told a late press briefing following the Japanese premier’s meetings with US President Barack Obama and President Aquino at the Asia-Pacific Economic Cooperation (Apec) summit here.

The 18-nation EAS—which groups the members of Asean with eight other countries with close partnerships with it— will hold its annual meeting on Nov. 21-22, following the annual Asean meetings. Leaders of Australia, China, India, Japan, New Zealand, Russia, South Korea and the United States will attend the meetings starting Saturday.

Most of the leaders going to Kuala Lumpur attended the Apec summit in Manila earlier this week.

Obama himself tried to turn the heat on China over its territorial claims in the disputed South China Sea and assured allies that a US “pivot” to Asia remains a core policy during the just concluded Apec meetings in Manila.

In talks with Mr. Aquino during Apec, Obama demanded China halt land reclamation work that is turning seven reefs in the Spratly archipelago into islands.

Obama arrived in Malaysia on Friday on the final leg of his sweep of summitry aimed at furthering Washington’s bid to rebalance ties toward Asia and challenge China’s increasingly assertive posture in the region.

US Department of State officials said he will be focusing on the freedom of navigation in the South China Sea, along with trade and economic issues, in the EAS meetings.

Beijing has overlapping claims with Vietnam, the Philippines, Malaysia, Taiwan and Brunei in the South China Sea, through which $5 trillion in shipborne trade passes every year.

Kawamura said Abe briefed Obama and Mr. Aquino in separate meetings on the developments in the East China Sea during Apec, saying Chinese vessels continued to intrude in the waters surrounding the Senkaku islands claimed by Japan and China.

“There is a possible escalation (of tension) in this regard,” Kawamura said, quoting the Japanese leader.

Abe also discussed the developments in the South China Sea with Obama and Mr. Aquino, he said.

In a meeting between Mr. Aquino and Abe, a general agreement on the transfer of defense equipment had been reached, Kawamura said.

“We would like to accelerate the examination of the early signature and finalization of the negotiations and a cooperation in the area of ocean security,” Kawamura said.

In the same meeting, Abe said he was ready to support efforts to beef up the Philippine Coast Guard. “We would like to positively consider the Philippines’ request for large patrol boats,” Abe said.

Japan has been vocal in its opposition to China’s large-scale reclamation works on reefs in the contested South China Sea and support for the Philippines’ pending arbitration case at the United Nations arbitral tribunal challenging China’s nine-dash claims.

“Japan supports the approach because it is peaceful and it is based on international law,” Kawamura said.

China has said it does not want the South China Sea issue to be the focus of the meetings in Kuala Lumpur but acknowledged the topic would be hard to avoid.

The construction of airfields and other facilities on some of China’s artificial islands has alarmed the region and raised concerns in Washington that China is extending its military reach deep into maritime Southeast Asia.

Obama is making his second visit to Malaysia in two years. It comes amid allegations by US lawmakers and rights groups that his administration ignored Malaysia’s abuse of trafficking victims to ensure its accession to his Trans-Pacific Partnership trade agreement.

US deputy national security adviser Ben Rhodes said Obama will “very directly” raise concerns about the status of the political opposition and respect for human rights in talks with Najib scheduled on Friday.

“We are going to be very candid about areas where we have disagreements and differences and frankly objections if we see that the type of universal values that we support are not being respected,” Rhodes told reporters on Thursday at the Apec summit in Manila.

Critics have accused Najib of escalating a crackdown on dissent and free expression after losing the popular vote in the 2013 general election. The prime minister has come under pressure himself after it was revealed in July that nearly $700 million in unexplained deposits were placed into his personal bank accounts. He has denied any wrongdoing but has yet to detail the source and purpose of the money he received.