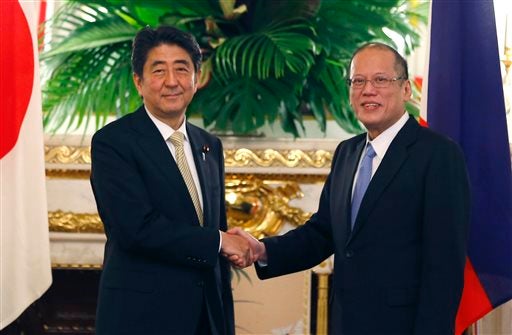 President Benigno Aquino III and Japanese Prime Minister Shinzo Abe have again discussed the maritime disputes in South China Sea, as well as possible transfer of defense equipment from Japan to the Philippines.

Aquino and Abe met on Thursday evening for a bilateral meeting at the sidelines of the Asia-Pacific Economic Cooperation (Apec) Summit in Manila.

It was the seventh meeting between the two leaders, five months after Aquino visited Japan for a state visit.

“We welcomed the agreement in principle on transfer of defense equipment and agreed to work together for the early signing of agreement and realization of cooperation in defense equipment,” Abe said in a press statement after the meeting.

He said Aquino requested a “provision of large patrol vessels to the Philippine Coast Guard and Japan would like to consider the specifics of the matter.”

Aquino said his meeting with Abe was “extremely productive” and that the relations between the Philippines and Japan — both close US allies — is “a bond that transcends diplomacy.”

The Philippines was occupied by Japan during World War II but since the re-establishment of diplomatic relations and the conclusion of a war reparations agreement, the two countries have become allies.

READ: PH, Japan in talks over implementation of defense deal

Japan is now a strategic partner of the Philippines.

Aquino said the two countries have “made substantial progress” in the implementation of the Joint Declaration for a Strengthened Strategic Partnership and its Action Plan.

“During our meeting, the Prime Minister and I reaffirmed the deepening of the Strategic Partnership. In fact, we have taken a significant step forward in enhancing our defense and security relations by agreeing in principle on the Transfer of Defense Equipment and Technology, and we are hopeful that we can conclude and sign this Agreement sooner rather than later,” he said.

He said both the Philippines and Japan “took the opportunity to discuss the security challenges that confront both our nations, and pledged to cooperate in advancing our shared advocacy for members of the international community to act responsibly.”

While Aquino refrained from mentioning the name of China, Abe said they shared concerns “over unilateral actions to change the status quo such as the large scale land reclamation and building of outpost in the South China Sea.”

He said both countries believe in partnership “based on the rule of law to protect open, free and peaceful seas,” a principle that claimant countries in South China Sea have been citing.

“Regarding the arbitration between the Philippines and China, which has entered into a new stage, we reiterated our position to continue to support dispute resolution based on international law,” Abe said.

Aquino said the economic relations of the Philippines and Japan are “vibrant and robust.”

“Japan remains the Philippines’ largest bilateral trading partner and among the largest sources of investments,” he explained. “We hope to further boost the synergies of our economic cooperation for the benefit and progress of the peoples of both our countries and the greater region.”

During the bilateral meeting, Foreign Affairs Secretary Albert del Rosario and Japanese Ambassador to the Philippines Kazuhide Ishikawa signed an Agreement of Japan and the Republic of the Philippines on Social Security.

Aquino said the agreement will “maintain the benefit rights of workers who have divided their careers between the Philippines and Japan.”

The Philippines, which is a long-time beneficiary of Japan’s Official Development Assistance (ODA), thanked Abe for helping “usher in development into the Philippines.”

There was also an exchange of notes on the North-South Commuter Railway Project from Malolos to Tutuban.

“This will certainly help us improve the land transportation capacity of the greater Metro Manila area and provide a more environmentally sustainable mode of transport,” he said.

“The Filipino people truly appreciate Japan’s continued support with regard to the Bangsamoro Peace Process by means of the implementation of the second phase of the Japan Bangsamoro Initiative for Reconstruction and Development (JBIRD),” Aquino added.

Abe expressed his admiration for Aquino’s “strong leadership that has guided the series of meetings to a great success” during the Apec.

He reminded the media that the Emperor and Empress of Japan will visit the Philippines next year to mark the 60th anniversary of diplomatic relations between the two countries.