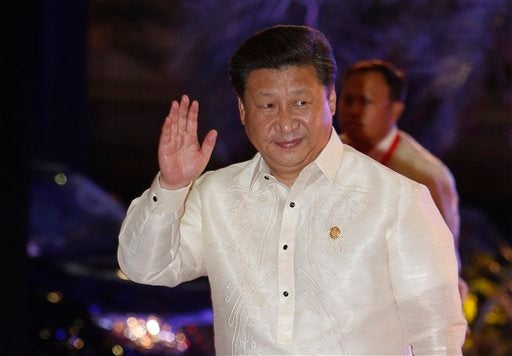 “With various new regional free trade arrangements cropping up, there have been worries about the potential of fragmentation. We, therefore, need to accelerate the realization of FTAAP (Free Trade Area of the Asia-Pacific) and take regional economic integration forward,” Xi said on Wednesday.

He issued the call in his keynote address at the Asia-Pacific Economic Cooperation (Apec) summit in Manila.

China and the United States are pushing their own free trade visions for the economically vibrant and populous region.

China is pointedly excluded from the TPP, part of Washington’s attempt to ramp up influence in the region with its “pivot” to Asia. (The Philippines, host of the Apec summit, is neither a member of TPP nor FTAAP.)

Beijing has instead pushed its own agreement, the FTAAP.

“We need to encourage equal footing participation and extensive consultation, and make free trade arrangements open and inclusive to the extent possible, with the view of enhancing the economic openness in our region and upholding the multilateral trading regime,” Xi said.

“We must commit ourselves to win-win cooperation, oppose protectionism and promote fair competition,” he added.

Apec members first broached the idea of FTAAP in 2006. It could add about $2.5 trillion to the world economy by 2025, according to the Pacific Economic Cooperation Council.

The 21-member Apec bloc itself accounts for about 60 percent of the global economy. It groups the United States and China with middle powers such as Australia as well as developing nations in Asia and South America.

Opening to outside world

Xi said China would pay more attention to opening to the outside world and would work for a better environment for investors.

China’s policy of welcoming foreign investments would not change, nor would its protection of the legitimate rights and interests of foreign investment companies or its commitment to provide better services for them, he added.

“China’s door to the outside world will forever stay open,” Xi said.

He also said that with global growth slowing down, China was working “vigorously” to overcome difficulties and meet challenges by strengthening macro regulations and advancing reforms.

While economic regulators have fluctuated, its economy has maintained steady and fairly rapid growth, he said.

He said the strong support and conditions favorable for continued growth had not changed, along with the forward movement of the country’s economic restructuring and upgrading.

In the latest quarter, China’s growth fell to a six-year low of 6.8 percent, as Beijing tries to shift the economy away from reliance on trade and investment.

The slowdown, which has been unfolding for several years, has rippled around the world, crimping growth in countries, such as South Korea and Australia that were big exporters to China.

Xi also said Beijing was stepping up efforts to counter climate change and clean up its environment, which has been heavily polluted by years of breakneck economic growth.

“We will make ecological progress part and parcel of the entire process of our economic and social development,” he said.

US President Barack Obama said on Wednesday work toward the final stage of getting the TPP deal off the ground was not easy, even as he reiterated the pact was a good deal economically.

“Execution is critical after we arrived at the text,” Obama said at a meeting with leaders of 11 other TPP member countries on the sidelines of the annual Apec summit.

“It is not only a good deal economically but also reflects our common values,” Obama said. “TPP is at the heart of our shared vision for the future of this dynamic region.” With reports from the wires