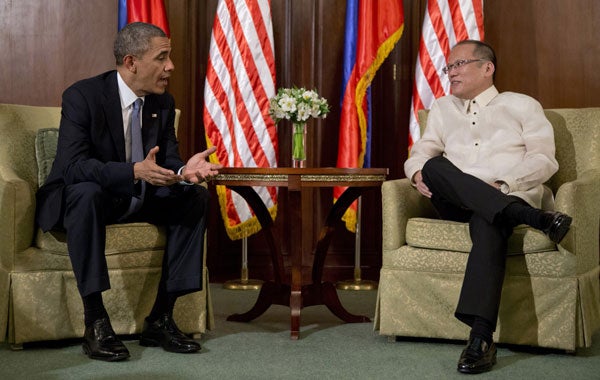 Despite strong warning from China against raising the issue of territorial disputes, United States President Barack Obama and President Benigno Aquino III may discuss the claims on the South China Sea (West Philippine Sea) and the Enhanced Defense Cooperation Agreement (Edca) during the Asia-Pacific Economic Cooperation (Apec) summit in Manila next week.

Saying he did not want to preempt the White House, US Ambassador to the Philippines Philip Goldberg on Wednesday said he believed the two controversial issues would be discussed by the two leaders at the sidelines of the summit.

READ: 14 senators draw line on Edca | US to operate ‘wherever’ law allows in South China Sea

“I would imagine they will, when the two presidents get together, those are issues of mutual concern,” Ambassador Goldberg told reporters during the Veterans Day commemoration organized by the US Embassy in Taguig City on Wednesday.

Maintaining that Apec focused on economic issues, the American envoy said Obama was poised to strengthen the bilateral relations between Manila and Washington in his visit.

“His primary reason for being here is the leaders and the summit of Apec but during that time there will also be a meeting with President Aquino and other events to mark our bilateral agreements,” he said.

“So anytime a country hosts an Apec summit there’s also a bit of bilateral content as well.”

With an initial term of 10 years, the Edca grants US greater access to Philippine military camps, including the construction of facilities and storage of defense supplies.

The Senate of the Philippines yesterday drew the line on Edca, taking the position that any treaty entered by the president must be concurred by the chamber otherwise it would become “invalid and ineffective.”

The meeting between Obama and Aquino will occur in the same week the Supreme Court is expected to decide on the constitutionality of the Edca.

“We, of course, are waiting for a very important Supreme Court decision as is the government here. We have a good Edca agreement and we’re looking forward to implementing it when the time is right, when all the decisions have been made on this side,” Goldberg said.

The territorial spats between neighboring Asian countries will likely be discussed by Manila and Washington as well.

The South China Sea dispute, being an issue that concerns the US and the Philippines, could be the subject of the bilateral talks.

The Philippines, Malaysia, Vietnam, Brunei and Taiwan claim parts of the sea.

“I don’t want to preempt the President, but obviously our security, relationships, issues that are of mutual interest, our shared interest next month to make sure that there’s a successful outcome in climate change talks in Paris, these are all kinds of things to discuss—the economies of both countries, the economic progress that’s being made here, so there’s a full play,” Goldberg said.

“Apec itself is obviously concentrated on economic issues, not on political issues, not on military and security issues. But bilateral discussions on something else, obviously they will encompass the full array of the US-Philippine ties.”

Sending a clear warning not to bring out the maritime disputes in international events such as the Apec, China has earlier confirmed the attendance of President Xi Jinping.

The Philippines and China have agreed not to talk about the sea row and President Xi can expect “warmth and hospitality” despite rising tensions.

Asked if Obama would hold talks with the Chinese leader, Goldberg said he would leave the schedule and appointments of the American president to the White House.

“I leave it to the White House to announce his schedule while he’s here,” Goldberg said. Anthony Q. Esguerra CDG/RC