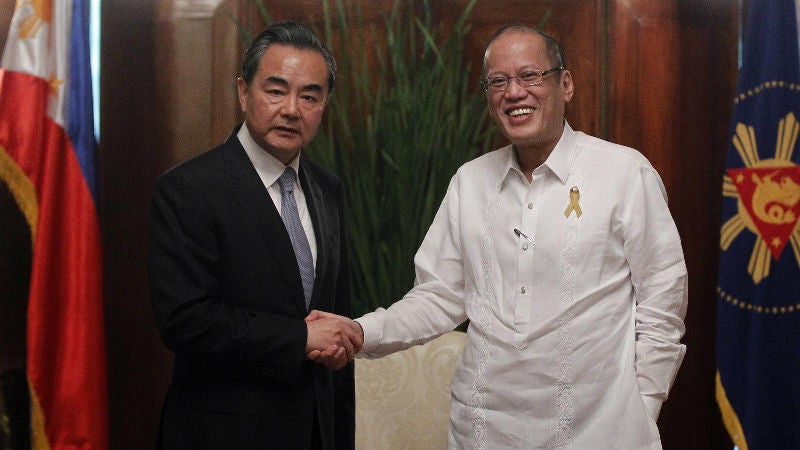 TIME OUT Like a good host, President Aquino warmly welcomes China Foreign Minister Wang Yi (left) in Malacañang on Tuesday. Wang had a working visit ahead of the Apec Leaders’ Meeting on Nov. 17-20, where China requested that conflicting claims over the West Philippines Sea be taken off the agenda. MALACAÑANG PHOTO

THE PHILIPPINES will keep its mouth shut.

Instead, President Aquino will be a “hospitable host” to Chinese President Xi Jinping at next week’s regional summit in spite of their territorial dispute in the South China Sea.

The President gave this assurance during a meeting in Malacañang Tuesday with Chinese Foreign Minister Wang Yi who is visiting Manila ahead of next week’s annual Asia-Pacific Economic Cooperation (Apec) summit that would bring together 21 heads of state.

The Philippines is setting aside the conflict with China during the summit for two reasons, said Assistant Secretary Charles Jose, the Department of Foreign Affairs (DFA) spokesperson. “We have a pending case before the United Nations and it is not the proper forum.”

Even if the South China Sea is an important trade route for most Apec member-economies, Jose explained that the maritime issues with China still fell under the regional security issues.

“(Countries) have every right to raise it. We cannot stop other countries from discussing issues that they consider important,” Jose said.

But Jose emphasized that the Philippines remains “committed to being a good host and making the visit (of Xi) productive, safe and comfortable.”

Presidential Communication Secretary Herminio Coloma Jr. said: “The President mentioned that he welcomed the decision of President Xi Jinping to attend the Apec summit. He assured the foreign minister that it is in the culture of the Filipinos as hosts to make our guests feel the warmth of Filipino hospitality.”

Wang, who did not speak to the press, called on Mr. Aquino after holding talks with Foreign Secretary Albert del Rosario.

Wang met for about an hour with Del Rosario. He waved but ignored questions shouted at him by journalists as he stepped out of the DFA.

Del Rosario said the meeting was “good.” He hurried to Malacañang, where Wang met Mr. Aquino.

Before their meeting, the two ministers posed for pictures and Wang signed the guest book. Del Rosario also hosted a lunch for Wang after the meeting with Mr. Aquino.

In Beijing, Chinese Vice Foreign Minister Li Baodong told reporters Tuesday that China was not aware of any plan to discuss the South China Sea issue during the Nov. 17-20 summit in Manila.

“Everyone knows that Apec is primarily about discussing trade and financial cooperation in the Asia-Pacific,” the official said.

Briefing reporters Tuesday, Jose said that although the Philippines had promised not to bring up the dispute in summit, “we have no control over what others will raise in the meetings.”

China, the Philippines and four other governments have overlapping claims across the vast South China Sea, with Beijing claiming it has sovereignty over virtually all of the waters. Some of the disputed areas are believed to sit atop vast undersea deposits of oil and gas, and straddle some of the world’s busiest sea-lanes.

The visits by Wang and Xi offer a rare opportunity for top-level talks between the Asian neighbors, which have seen diplomatic relations plummet in recent years over rival claims to parts of the South China Sea.

The Philippines has been angered over what it has branded China’s “bullying” and “hypocritical” tactics, including building artificial islands and taking control of a rich fishing shoal in Filipino-claimed waters.

China has in turn been angered over the Philippines’ efforts to have a UN tribunal rule on the dispute, as well as by Manila encouraging its defense ally the United States to exert military and political influence.

China claims nearly all of the South China Sea, even waters approaching the coasts of its Asian neighbors.

Mr. Aquino’s only meetings with Chinese leaders included a very brief encounter with Xi on the sidelines of last year’s Apec summit in Beijing. He also made a state visit to China in 2011 for talks with Xi’s predecessor, Hu Jintao.

“There was quite an extensive discussion on the preparations for the Apec meeting,” Jose said of the meeting between Wang and Del Rosario.

“The secretary recalled the warm reception and hospitality that President Aquino received from the Chinese side. We are waiting for this opportunity to reciprocate the reception and the hospitality,” Jose said.

Jose said Del Rosario had a standing invitation for Wang to visit the country.

“(Wang) was looking for an appropriate time. He was saying now is the good opportunity to visit the Philippines,” Jose said.

During the Tuesday’s bilateral talks with China, the two sides likewise agreed to explore ways of “how we can move the bilateral relations forward,” the DFA spokesperson said.

“That can be worked out through diplomatic channels. We have no target date for that. The agreement is there,” Jose said.

Amid the tensions in the South China Sea, Jose noted that the DFA received the Chinese foreign minister with warmth and hospitality.

“The atmosphere was positive and constructive. It was warm,” he said.

The meeting Tuesday, however, did not give any indication that Xi and President Aquino would conduct a bilateral meeting on the sidelines of the Apec summit next week.

“The door is always open for dialogue but there was no specific mention that there will be one during the upcoming Apec,” Jose said.

The bilateral meeting on Tuesday was considered a major development and a takeoff from the economic agreements reached during President Aquino’s state visit in China in September 2011 when he met then President Hu Jintao.

On the sidelines of the Apec summit, the Philippines and Vietnam, both claimants in the South China Sea, are expected to sign a strategic partnership agreement which was aimed at scaling up the ties of the two countries on several areas including defense and maritime cooperation.

This will make Vietnam as the Philippines’ third strategic ally, next to the United States and Japan. With reports from AP and AFP