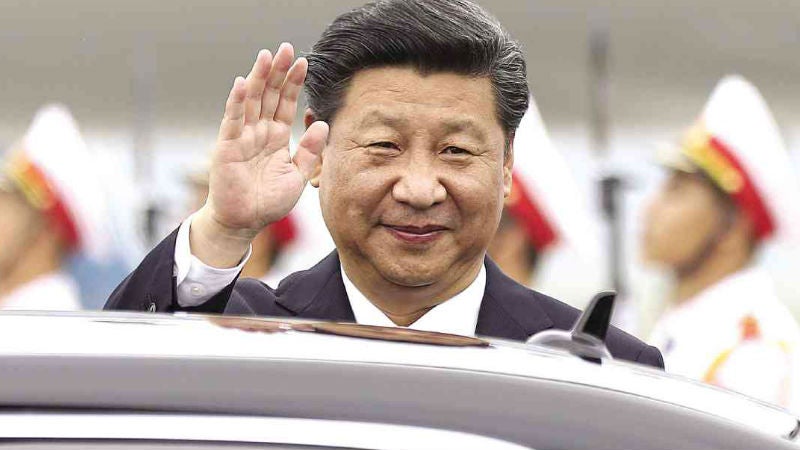 CHINESE President Xi Jinping will attend a summit of the Asia-Pacific Economic Cooperation (Apec) in Manila next week, amid tensions between China and the Philippines over a territorial dispute in the South China Sea.

The Chinese Embassy in Manila confirmed Xi’s attendance, according to Assistant Foreign Secretary Charles Jose, spokesperson for the Department of Foreign Affairs.

Xi is coming to Manila two weeks after the United Nations Permanent Court of Arbitration in The Hague ruled it had jurisdiction to hear a case brought by the Philippines to invalidate China’s claim to almost all of the South China Sea.

The ruling angered China, which has refused to take part in the arbitration, insisting it has “undisputed sovereignty” over the South China Sea, a claim challenged not only by the Philippines but also by Brunei, Malaysia, Vietnam and Taiwan.

Oral arguments on the substance of the Philippine case are expected to start days after the Apec summit in Manila.

China has said it will not accept any ruling by the arbitral court and urged the Philippines to come to bilateral talks to resolve the dispute.

But China is apparently not allowing the setback to be a reason for missing out on the gathering of 20 world leaders for the Apec summit from Nov. 17 to 20.

Chinese foreign ministry spokesperson Lu Kang said on the agency’s website Monday that Xi would attend the Apec summit on the invitation of President Aquino.

Before traveling to Manila, Xi will go to Antalya, Turkey, to attend the 10th G-20 Summit from Nov. 14 to 16 on the invitation of President Recep Tayyip Erdogan, Lu said.

Wang to lay the way

“At present, because of reasons everyone knows about, Sino-Philippine relations are facing difficulties. This is something China does not wish to see,” Hong told a daily news briefing in Beijing.

“China pays great attention to relations with the Philippines and is willing to appropriately resolve relevant issues on the basis of dialogue and negotiation,” he said.

Earlier, Malacañang said the Philippines would accord China “Filipino hospitality in equal measure with all other Apec delegations” despite the South China Sea dispute.

Communication Secretary Herminio Coloma Jr. said the dispute did not define the totality of the Philippines’ relations with China.

Apec’s members include the United States, China, Japan, South Korea and Canada, and together account for 57 percent of global production and 46.5 percent of world trade.

A security summit of the 10-member Association of Southeast Asian Nations (Asean) last week, attended by both the United States and China, failed to produce a customary final statement because the delegations could not agree on whether to mention the South China Sea dispute.

Organizers of the Apec summit in Manila are requesting journalists to avoid raising the South China Sea dispute, unless it is taken up by President Aquino and Xi in a bilateral meeting.

Aside from playing host to the Apec leaders, Mr. Aquino is expected to have at least 11 bilateral meetings, but government officials have yet to confirm whether the President will have one with Xi.

Marciano Paynor Jr., head of Apec national organizing council, on Monday said the Philippines wants to be a “gracious host” to all the guests that it would be best to avoid bilateral issues such as the South China Sea dispute.

“We discuss specific issues there (bilateral meetings). Then, by all means, ask. But when we don’t have bilateral issues with the economy, then I think it is our duty as host to make their stay here comfortable, as they did when we went to China last year,” Paynor told reporters.

Paynor acknowledged that it would be difficult for journalists not to ask the Apec leaders about the South China Sea dispute, but he emphasized that Apec is a forum for the discussion of economic issues.

“I will reiterate that when we meet at Apec, it’s all economic issues and we do not take up bilateral, specific bilateral, issues in Apec, and that’s the reason many of the leaders come,” he said.

Issues other than economic are not discussed by Apec “as a group,” he explained.

Those issues are tackled during bilateral meetings, he added.

A list of all leaders who have confirmed their attendance has yet to be completed, but Paynor said “the expectation is all of the leaders are coming.”