For being aspiring young Filipino journalists’ first experience with journalism, the Junior Inquirer (JI) Snoops program received the Silver Award for Enduring Excellence in ceremonies held by the World Association of Newspapers and News Publishers (WAN-Ifra) at Bombay Exhibition and Convention Center in Mumbai, India.

“You are the first persons to teach young people about journalism,” Aralynn McMane, WAN-Ifra executive director for youth engagement and news literacy, said during the awarding on Sept. 3, where JI was hailed for being “first in news reporting.”

WAN-Ifra, based in Paris and Frankfurt, with subsidiaries in Singapore and India, is the global organization of the world’s newspapers and news publishers. It represents more than 18,000 publications, 15,000 online sites and over 3,000 companies in more than 120 countries.

Its core mission is to defend and promote press freedom, quality journalism and editorial integrity, and develop prosperous businesses.

The Snoops program, the youth journalism initiative of the Inquirer, was hailed by the WAN-Ifra jury for “excellently [reflecting] enduring excellence in how it has kept the momentum going for this well-conceived, strong program over the years while maintaining a freshness all along the way.”

“To train young writers to become journalists is what the Junior Inquirer Snoops program is all about. Them turning in well-written articles is reward in itself, but we are very thankful for and very proud of the validation that we received from WAN-Ifra,” said JI editor Ruth Navarra-Mayo, who received the award.

“This is an 18-year-old program and the current JI team is committed to continuing the program for as long as there are 7-12-year-olds interested in writing for our newspaper,” Mayo said.

Other newspapers that received the same award were the Seattle Times (United States) and Clarin (Argentina). Out of more than 70 entries from different countries, only 23 won awards.

McMane said the awards were aimed “at honoring all kinds of excellence in engaging young people.”

“We seek strategies that are innovative, sustainable and transferrable,” she said. “These publishers are there the first time a young person experiences something. All kinds of things. You will see through these winners that that tradition has continued.” 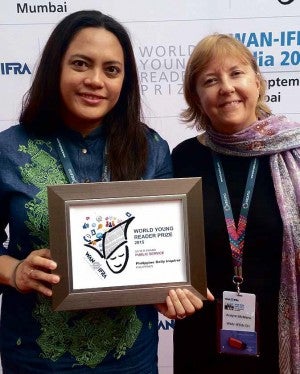 “Probably the most important thing … [is that] they are there for the life-stage firsts. They don’t just lump all millennials together. In fact, millennials are too late to start thinking about,” McMane said. “They start with the very young. Primary school, secondary school. Getting the first job, going to university, leaving home. All those key times in a person’s life.”

“Another thing these winners have in common is that they lead causes that matter to these young people. They have an opinion and they serve young people by helping them think about these causes, and act on them,” she said.

“Winners of these prizes tend to treat kids as normal. Not as creatures in a zoo. They get them out of the ghetto. They tend to treat them like normal human beings through the website or paper. Quoting them in the stories. No stupid headlines that insult them. They teach about the importance of news freedom because nobody else is doing that,” she added.

Launched in October 1995, JI was the first news magazine for children in the Philippines. Almost two years later, it introduced the JI Snoops, a two-year program for children ages 7-12 years, who receive assignments, training and guidance from the JI staff.

Over 40 “pioneer correspondents” were introduced in January 1997, including now Inquirer reporter Julie Aurelio and award-winning screenwriter and director Antoinette Jadaone.

Since then, there have been more than 120 Snoops in eight batches, with some years seeing as many as 200 applicants expressing interest in joining the program.

First introduced under JI editor Natasha Vizcarra, the program was shepherded through the years by JI staffers Eline Santos and Grace Leung, who created the recruitment and training system still in use today.

Apart from the World Young Reader prize, JI has also been cited by other award-giving bodies. It was named “Best Newspaper for Children” by the United Nations Children’s Fund and the Philippine Press Institute for five consecutive years and cited for its “distinctive and consistent advocacy for the rights of the child,” before it was elevated in April 2007 to the Hall of Fame.