Being whistle-blower part of job for Indian employee

It is dangerous and life-changing, but for Sanjiv Chaturvedi, a government employee in India and recipient of this year’s Ramon Magsaysay Award for emergent leadership, being a whistle-blower is just part of his job.

The Ramon Magsaysay Award Foundation recognized Chaturvedi for “his exemplary integrity, courage and tenacity in uncompromisingly exposing and painstakingly investigating corruption in public office, and his resolute crafting of program and system improvements to ensure that the government honorably serves the people of India.”

In an interview with reporters last week, Chaturvedi admitted encountering threats to his life, job security and career, but he added that he would not be stopped or disillusioned in his crusade, nor would he quit the civil service.

“I had a tough time as the people I’m against were powerful and they always have the upper hand,” he said, adding that the eventual public recognition of his work, as well as intervention by higher authorities, “vindicated my [past] actions and encouraged me to move forward.”

According to the RM Foundation’s citation, Chaturvedi is “not a circumstantial whistle-blower but one genuinely seeking to reform the system from within.”

Chaturvedi is described as “meticulous” in investigating cases, submitting documented reports, and pursuing criminal and administrative action to punish the guilty.

He is also described as “zealous” in performing his regular duties, carrying out meaningful projects and supporting and protecting honest employees. 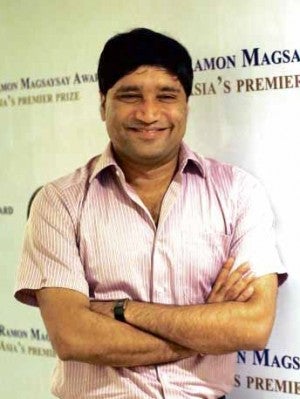 “Actions he has taken have bolstered government revenues, and resulted in the recovery of stolen public funds and the suspension or removal of erring officials. Within the sphere of his authority, he has initiated changes in operational systems to ensure transparency and accountability, whether these be better procedures in tracking public complaints or ensuring that wages and benefits of contractual employees actually go to them,” the foundation said.

Chaturvedi said the worst experience he had was when fabricated criminal charges were filed against him. Had those charges led to the filing of cases against him in court, he would have lost his government job.

Forty-year-old Chaturvedi, a graduate of National Forest Academy, began his fight against official corruption when he was assigned to the town of Kurukshetra, in Haryana state in northern India, in April 2007.

As a divisional forest officer, he exposed the illegal construction of a canal that threatened the critical Saraswati wildlife sanctuary, home to the endangered Indian hog deer, black buck antelope and wild boar.

About 600 trees were cut down in the forest as the earth was dug up to construct the canal without permission from the sanctuary’s officials.

After submitting his report to higher authorities and ordering the construction stopped, as he was supposed to do, Chaturvedi was unceremoniously transferred to a new position and warned that he would face disciplinary action for intervening in a project approved by the state government.

An environmental group, however, took over Chaturvedi’s disclosure and secured a ruling in August 2007 from the state supreme court, which stopped the project and fined the guilty officials.

In the meantime, Chaturvedi was assigned to the city of Fatehabad where he exposed hundreds of millions of rupees in public funds being used to buy rare trees and medicinal plants for an herbal park being built on private land owned by an influential politician.

He was again suspended for “indiscipline,” but he contested his suspension, and the Indian president had to intervene and revoke the suspension order.

A private organization took the herbal park irregularity to court, but the state government preempted the case by reclassifying the park as public land.

Chaturvedi was transferred to Jhajjar town, where he exposed another scam involving the fake plantations funded by public funds, which were embezzled using nonexistent foundations and fake signatures of officials. He suspended nine forest officials and terminated 40 employees due to the scam.

Chaturvedi was transferred a dozen times, and at each posting found corruption to expose and stop and penalize officials.

His latest posting is at All India Institute of Medical Sciences (AIIMS) in New Delhi, serving as chief vigilance officer.

“Our job is twofold: No. 1, to take preventive actions. We have power and authority to design the systems to provide long-term solutions to prevent leakages, inefficiencies and corruption. [No. 2], we have the power to initiate disciplinary actions and terminal investigations,” he said.

At the public medical college, he continued his campaign against corruption, exposing irregularities and filing cases involving government procurement, favoritism in awarding of contracts, kickbacks in the construction of buildings, and various irregularities in advertising, recruitment, hiring of security personnel, purchase of equipment, and foreign travel. He also penalized one employee for unauthorized use of the AIIMS cancer center to treat a pet dog.

After unearthing bigger irregularities involving the collection of pensions of dead government employees, and a conspiracy by government officials and suppliers of fake medicines, Chaturvedi’s enemies plotted his ouster by questioning his eligibility and the validity of his appointment at AIIMS.

As a result, the health minister removed him as chief vigilance officer, but retained him as deputy secretary with no major duties.

“When you are trying to expose the corruption of your own boss, the person who can affect your career, it is a very ticklish situation. In this situation, if you want to really go ahead against corruption, if you have larger issues on your mind, then it requires very strong conviction, a very strong sense of commitment,” Chaturvedi said.

Chaturvedi, whom a news outlet branded as “Inquisitor of Maladies,” is grateful to India’s independent judiciary for affirming his actions, the members of parliament and government officials who supported and protected him from unjust persecution, the private groups and the media that have recognized and encouraged him in his fight against corruption, and his father, also a civil servant, who inspired him and trained him to prepare for government work.

His advice to would-be whistle-blowers in the government: “You have to work in an intelligent manner. You should study the pluses and minuses of the system. You should not lose your job or your liberty, you should avoid any harm that comes to you because this would discourage so many other people who are trying to hold the system together and working honestly and aspiring to be whistle-blowers.”

He said whistle-blowers should not try to work alone, as there were many good private groups and good people in the government.

Asked about his motivation in exposing corruption, Chaturvedi cited poverty in the place in India where he grew up and his religious convictions.

“The region of my country where I came from is not very economically well-off. I have seen poverty from very close quarters. So when I see corruption—basically corruption is the wrongful [deprivation] of people of their own resources—so if somebody is trying to enrich himself at the [expense] of the public, at the cost of natural resources, so it creates a sort of unrest in me. I become very passionate about that and I personally take it to myself that whatever legal action has to be taken against these corrupt people will be taken to its logical conclusion. It can be said as a test case to deter other corrupt people from indulging in the same things,” he said.

Chaturvedi also holds that “duty is considered the supreme religion.” Whether sitting on his chair in his New Delhi office or inspecting the forests in Haryana, he said he saw himself as the “custodian of the trust of the people and of the country’s natural resources.”

“If you have to lay down your life, it should be laid down in the cause of duty because nothing is holier than duty,” he said.

Read Next
Song ‘Miss Ko Na’ reunites OFWs with families
EDITORS' PICK
Current dominant strain of COVID-19 more infectious than original—study
Water remains our saving grace right now
EuroMillions Superdraw: A lottery draw unlike any other is coming to the Philippines
DOLE: Return of OFWs’ remains from Saudi to be ‘delayed,’ deadline moved to ‘early next week’
Smart releases Hyun Bin’s second TVC
‘Justice will be done,’ Duterte assures as he vowed probe on Jolo incident to bare ‘truth’
MOST READ
Locsin warns of ‘severest response’ if China’s army drills in SCS ‘spill over’ to PH domain
Duterte tells military: No other president looked at you the way I did
Man who stole 2 cans of luncheon meat lands in jail in Manila
VP Leni Robredo: ‘Remember, you were made for these times’
Don't miss out on the latest news and information.