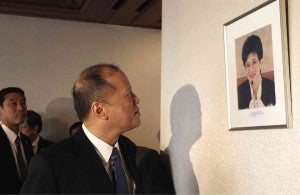 TWO AQUINOS On the last day of his state visit to Japan, President Aquino casts a meaningful look at the picture of his late mother, former President Corazon Aquino, in the guest room of the Nippon Press Center in Tokyo. Ms Aquino’s photo was taken in 1986. MALACAÑANG PHOTO BUREAU

TOKYO—President Benigno Aquino III on Friday said he wanted to start talks toward signing an agreement allowing Japanese troops to visit the Philippines and join a wide range of operations as reports came that a Chinese warship fired flares on a Filipino fishing boat near a reclaimed reef in the disputed South China Sea.

Defense Secretary Voltaire Gazmin, a member of President Aquino’s entourage on a four-day state visit to Japan, informed journalists in Manila about the Chinese action by text message on Friday.

“If indeed it happened, it is a cause of grave concern,” Gazmin said, indicating that the Philippine government had yet to verify the reports.

The incident reportedly happened near Mabini Reef (Johnson South Reef) in the Spratly archipelago on the night of May 30.

“They were about 4 kilometers from the reef,” Bito-onon said.

“It was like a warning to go away,” he said.

Bito-onon said the Filipino fishermen, who had sailed from Balabac Island in Palawan province, steered toward Vietnam-occupied Rurok Island (Sin Cowe) and continued fishing after the Chinese warning.

Besides the Philippines and China, Vietnam and Taiwan also claim Mabini Reef.

China is reclaiming land around reefs in the Spratlys and driving away its weaker rivals’ vessels from the area believed to be home to vast oil and gas reserves.

In a meeting with Japanese journalists, President Aquino said the Philippines was ready to start talks with Japan on Japanese military troops, aircraft and naval vessels to use Philippine bases to refuel and resupply, in a bid to advance mutual defense relations amid aggressive efforts by China to project its military might across the Asia-Pacific region.

Closing his state visit to Japan, which has highlighted the warm relationship between Manila and Tokyo, Mr. Aquino spoke about a Visiting Forces Agreement (VFA) with Japan similar to security accords with the United States and Australia and signaling a possible expanded Japanese troop presence in the South China Sea.

A VFA with Japan would allow refueling and other legal needs for Japanese troops while in the Philippines, Mr. Aquino said.

Mr. Aquino and his Japanese host, Prime Minister Shinzo Abe, signed a strategic partnership deal on Thursday, agreeing to launch talks to sell Japanese military hardware to the Philippines and to bolster exercises and operations between their militaries.

To be discussed by officials of both countries is the sale by Japan to the Philippines of P-3C antisubmarine reconnaissance aircraft and radar technology.

Also on Thursday, the Philippines and Japan signed a deal confirming the supply of 10 patrol vessels to the Philippine Coast Guard so Manila could step up patrols around islands within its territory in the South China Sea.

The signing of the Tokyo declaration came as Japan continued the debate on the reinterpretation of its pacifist postwar Constitution, which bars the operation of a full-fledged Japanese military and the use of force in case of international disputes. Currently, Japan is limited to maintaining a Self-Defense Force.

Abe wants to expand Japan’s military role abroad, and has been concluding partnerships with a number of countries, including Australia, to complement Tokyo’s cornerstone alliance with the United States.

Japan hosts American troops under its bilateral security treaty but has no other such visiting troop arrangements, except for a few countries when Japan joined UN-led peacekeeping efforts.