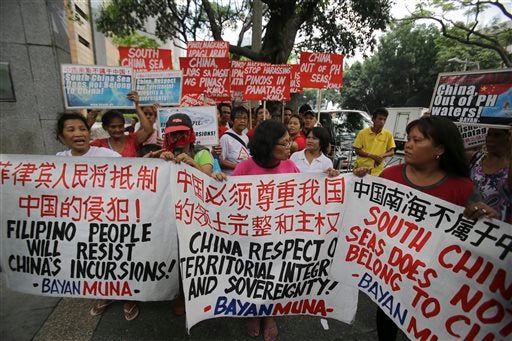 Filipino activists march towards the Chinese Consulate during an anti-China rally at the financial district of Makati, south of Manila, Philippines on Thursday, June 4, 2015. More than 100 Filipino activists demanded that China stop its increasingly assertive actions in the disputed South China Sea, and warned during a rally Thursday they could target Chinese economic interests. AP PHOTO

A militant group denounced Saturday the latest incident where a Chinese coast guard allegedly fired flares at a Philippine fishing boat over the disputed islands in the West Philippine Sea (South China Sea).

“There is now an urgent need for Filipinos to get our acts together and decisively act to exert pressure and counter China’s moves,” Colmenares said in a statement.

He said China has already reclaimed at least 7 reefs over the disputed waters, which are clearly within Philippine territory and exclusive economic zone “but hardly anything has been done to address it.”

“We have concluded that the US is only interested in ensuring its unhindered passage in the West Philippine Sea, and with this interest ensured, will not hinder China’s actions,” he said.

“The US and China connive and compete with one another to impose their dominance over the region,” he added.

READ: Protest set vs US, China ‘threats to PH sovereignty’

The lawmaker also assailed President Benigno Aquino III’s idea of eyeing a Visiting Forces Agreement (VFA) with Japan allowing Japanese troops to visit the Philippines and join a wide range of operations.
He said the move is deemed to “sell out of our sovereignty by suggesting a VFA with Japan.”

“Of course help from the international community is welcome but there should be no strings attached. VFAs or other military pacts should not be demanded,” he said.

He said the Philippines has a standing VFA with US and Australia but and it has done nothing to modernize the Armed Forces of the Philippines (AFP) and to deter China from its aggressive actions.

“Now the proposed Visiting Forces Agreement (VFA) between the Philippines and Japan would only lead to our further dependence on other countries,” he said.

“With another VFA or any other military pact with other countries the Philippines would become a bigger magnet for attacks of these countries’ enemies. We would become the theatre of war of countries that are only here because of their vested economic, political and military interests, “he said.

With Aquino’s term expiring in 2016, he said the least he could do “is not to further drag our country in another arms race and another Cold War era like situation between warring and rivalling giants as in the case now between the US and its partner Japan versus China.” IDL