Santiago seeks probe of losses due to PH-US war games 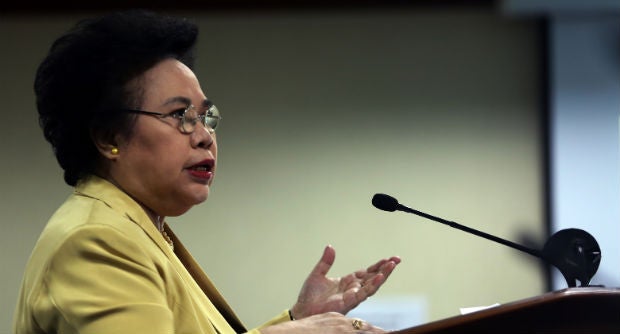 CITY OF SAN FERNANDO, Philippines—Sen. Miriam Defensor-Santiago has filed a resolution directing a Senate committee to conduct an inquiry into the economic losses supposedly incurred when the Philippine and American governments held war games in Capas town in Tarlac.

A copy of Senate Resolution No. 1342 sent by Santiago’s office to Capas Mayor Antonio Rodriguez showed that it was filed in response to reports by the mayor on the impact of the Combined Arms Live Fire Exercise (Calfex), which was held in Barangay (village) Sta. Juliana from April 20 to May 3.

Santiago is chair of the legislative oversight committee on the Visiting Forces Agreement (VFA).

Rodriguez, in a letter to Santiago, said tour guides, drivers, transport operators and workers, including Aetas, lost around P900,000 daily because Crow Valley was off-limits to tourists, farmers and other civilians during the joint military exercises.

“[The] government is duty-bound to put the interests of the Filipino people before its obligations to any foreign partner,” said Santiago in the resolution.

“The economic concerns on the military exercises between the Philippines and the US again bring to the fore the VFA, which, at best, disturbs communities, and, at worst, infringes on the country’s sovereignty,” she added.

Sta. Juliana is one of three routes to Mt. Pinatubo where tourists come to see a 3-kilometer wide lake that formed at the crater when the volcano erupted in June 1991.

The area is part of the 18,000-hectare Crow Valley firing range that the US Air Force set up in the 1960s. It was placed by the Philippine government under the jurisdiction of the Philippine Air Force after 1991.

Aetas have pending applications for certificates of ancestral domain title over the area.

The resolution, filed on May 14, said that under Section 7, Article II, of the 1987 Constitution, “the state shall pursue an independent foreign policy and that in its relations with other states, the paramount consideration shall be national sovereignty, territorial integrity, national interest and the right to self-determination.”

It said the VFA, approved in 1999, has not been renegotiated although Senate Resolution No. 1356 of the 14th Congress directed the Department of Foreign Affairs (DFA) to do that.