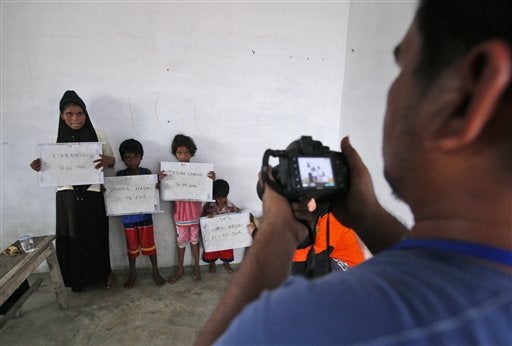 Ethnic Rohingya women and children have their photo taken for registration purpose at a temporary shelter in Langsa, Aceh province, Indonesia on Sunday, May 17, 2015. Boatloads of more than 2,000 migrants — ethnic Rohingya Muslims fleeing persecution in Myanmar and Bangladeshis trying to escape poverty — have landed in Indonesia, Malaysia and Thailand in recent weeks. Malacañang on Tuesday vowed to “do what is needed” should thousands of Asian migrants who are stranded at sea land on Philippine shores. AP PHOTO/BINSAR BAKKARA

Malacañang on Tuesday vowed to “do what is needed” should thousands of Asian migrants who are stranded at sea land on Philippine shores.

“It is inappropriate to engage in speculation,” President Aquino’s spokesman said, when asked if the government would take in migrants fleeing Myanmar and Bangladesh.

“We will do what is needed and deal with concrete situations as these actually materialize,” he said.

In a separate statement, Coloma noted how the Philippines “had extended humanitarian assistance to boat people and had even established processing centers for Vietnamese [refugees] in the 1970s.”

“The Philippines, as a state party to relevant instruments, such as the 1951 Convention Relating to the Status of Refugees, concretely manifested its solidarity with the United Nations in providing succor and relief to persons involuntarily displaced from their homelands as a consequence of political conflict,” he said.

Southeast Asian countries have been under increasing pressure to take in members of Myanmar’s Rohingya minority and Bangladeshis fleeing persecution. The United Nations has warned of “floating coffins” in prompting the countries to help.

Many of the migrants have landed in Indonesia and Malaysia. There were

reports that fighting between Rohingya and Bangladeshi migrants had erupted over scarce supplies on boats stranded at sea after they were abandoned by their human traffickers.

Justice Secretary Leila de Lima on Tuesday proposed that the Philippines and other Association of Southeast Asian Nations (Asean) members send out rescue ships to pick up the boat people and save more lives.

De Lima met for an hour at the Department of Justice in Manila with Bernard Kerblat, UN High Commission on Refugees (UNHCR) representative to the Philippines, to discuss the plight of the Rohingya and Bangladeshis.

“It would be a good gesture if we send a rescue ship or two along with our Asean neighbors, and it should be a concerted effort, a regional action,” De Lima said.

“I think the humanitarian consideration should transcend all other considerations. First thing’s first, [let’s] save lives,” she added.

For his part, Kerblat described the plight of the boat people as “a serious crisis” that Southeast Asian countries need to attend to.”

“People [are] stuck in the high seas, some of them are already lost, some about to be lost. This is a very serious matter, [a] regional crisis,” he told reporters.

Kerblat said the UNHCR was appealing to Southeast Asian governments to make a collective response to the crisis.

“Basically [what] we’re doing with the various governments in the region is to look at ways and means to put together ideas and the basic message here is: What can be done collectively to try to save lives? It’s not an easy matter, it’s very complex,” he said.

Kerblat said the UNHCR was grateful for the Philippines’ “principled position” of honoring its commitment to international conventions on taking in and protecting asylum seekers.

De Lima had earlier said the Philippines was ready to take in the “boat people should they come to our shores.”

“A process is in place to accord the protection of the Philippine government to genuine asylum seekers,” De Lima had said in a statement.

Meanwhile, the Department of Foreign Affairs (DFA) said on Tuesday the Philippines would balance its commitment to international conventions with the national interest should the Rohingya and Bangladeshi migrants reach the country.

Assistant Secretary Charles Jose, the DFA spokesman, said the department shared De Lima’s position that the government must not turn away the people who were in rickety boats should they arrive in the country.

“We intend to honor our commitment to the international conventions,” Jose said.

“In the past, we demonstrated our commitment when we took in boat people from Vietnam and established processing centers in Palawan and Bataan,” he said.

“We have to balance these commitments, however, with our interests, economy and security,” he added.

Thousands of Rohingya refugees have fled persecution by Buddhist extremists in Myanmar and have been drifting at sea creating a humanitarian crisis.

Nearly 3,000 migrants have swum to shore or been rescued off Indonesia, Malaysia and Thailand over the past week, with thousands more believed to be drifting on boats without food or water.–With an AFP report