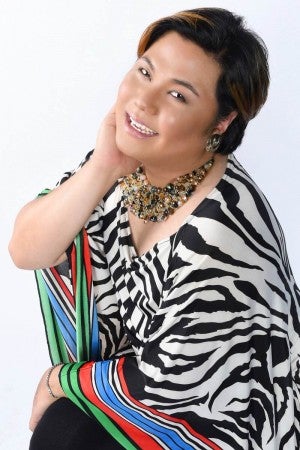 Jelly Balbuena is going to the World Championships of  Performing Arts. CONTRIBUTED PHOTO

SAN FRANCISCO — In two months, the World Championships of Performing Arts (WCOPA) will be held in Long Beach, California. This year, a Filipino from San Francisco is competing against contestants from 40 countries. Singer and stand-up comedian Angelo “Jelly” Balbuena will be representing Team USA.

Jelly could not believe his eyes the first time he received a text message from WCOPA organizers informing him that he had made it as a finalist. The one-of-a-kind contest is touted as the “Olympics” of performing arts.

“I hardly join any competition but this one, I just had to,” the Tacloban-born Jelly told INQUIRER.net in a telephone interview May 9. “So when I read that there would be an audition in S.F., I said I would give it a try. I went alone, I was so nervous. I sang three songs and even messed up the lyrics.”

Philippines-based singer Jed Madela, currently a juror at ABS-CBN’s “Your Face Sounds Familiar” is one of WCOPA’s success stories.

“I learned about the competition when Jed won. I was still in the Philippines then, and it made me really want to join because I want to prove something for myself. I want to challenge myself on how far I can go,” Jelly said.

He immigrated to the United States in 2009 but shortly after went back to the Philippines to finish his nursing degree. Like many, his journey to the U.S. was “quite a struggle” at first.

Not all nursing graduates have a better chance at life, and Balbuena is among those who had to “start from scratch.” His first job was at a cosmetic company as a makeup artist, followed by a stint as a visual merchandiser for a clothing company.

“I tried everything [before I became] a performer. Sometimes I’d think, wait, I have a nursing degree, why don’t I just work as a nurse? But I’ve always believed that there are two kinds of jobs — one that feeds the stomach and one that feeds the soul.”

Jelly knew at a tender age what would feed his soul: music, hosting and making people laugh. One of the youngest members of children’s choir Singing Angels in his time, he is a trained singer.

“We would practice every day especially when we joined the National Music Competitions for Young Artists. We won 1st place during the finals in CCP Manila. My voice teacher, Mrs. Abesamis, was very good. And from there, I never stopped singing.”

In high school, he would do impressions of his teachers. This gave much delight to his classmates – his first taste of fan appreciation.

“I remember in high school, I joined a contest and did a standup comedy act. I won the contest and later on became the thespian of the year awardee. One of the judges in the contest happened to be a bar owner. He then hired me to perform in his club on weeknights.

“My stage name then was ‘Bumble Bee’. Imagine me with face paint of a bee, complete with wings!”

“Lea Salonga is my hero. Of course when it comes to OPM, there’s Regine Velasquez, Jed, Lani Misalucha and Gary V. I listen to every genre. I sing Broadway, pop, R&B, even opera. When

I’m on the road I listen to classical music. As far as comedy, I love Mitch Valdes, Nanette Inventor and Jon Santos. Then there’s Vice Ganda. I just love his humor.”

Fast forward, the Waray comedian came to know of the Ichiban comedy club through his friend Ricardo Cumpio, a club regular known as “Rick-Rick Sabik,” who then introduced him to Edna Ramos, the club owner.

“Sammy, Bacci, Poyay and Rick-Rick are my mentors in terms of being a standup comedian. They gave me pointers – when and how to throw a punch line and to do my research so I’d have something new to offer each time.”

His nightly gig at the comedy bar is a source of inspiration.

“It’s fun working with my fellow comedians. You always look forward to it. You get to enjoy what you’re doing, plus we make people happy! Sometimes, we’d have off days – when you’re not in the mood or something bad had happened but once you meet them backstage, you automatically forget about it. Kasi kulitan na sa backstage pa lang [Because the fun starts backstage].”

Which one is harder to do: singing or making people laugh?

“I guess making people laugh. ‘Cause singing, it’s already a given. I can sing. [When] you sing people’s favorite songs or give them a high note, they will give you rounds of applause. Unlike [with] making people laugh, you have to get their kiliti [tickle their funny bone] and their attention. Timing is very important too.”

Jelly will be staging some fundraising shows to defray expenses for the upcoming WCOPA finals. A registration fee of $1,800 is required to join the competition, and for board and lodging at The Westin Long Beach, the official residence, $1,600. Costs also include roundtrip airfare from San Francisco to Long Beach and local transportation. The competition will be held July 13 to 17 at the Long Beach Convention & Entertainment Center.

“I’m proud to represent our Fil-Am community in Team USA. I really hope that I get to bring home the Grand Performer of the World award.”