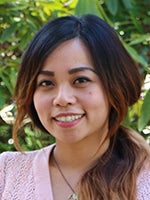 SAN FRANCISCO – A Filipino American woman is the top graduate student in science and engineering at San Francisco State University.

April Lynn Toledo was chosen by the College of Science and Engineering at San Francisco State to represent her peers as the top graduate student from her college at commencement ceremonies on Friday, May 22.

The path to a career in science wasn’t a direct one for April Lynn Toledo. After high school, she said, she was “kind of done with school” and worked a string of retail jobs. Eventually she decided to attend community college and major in gender studies.

She enrolled in a chemistry class on a whim and was immediately hooked. A surprising love for the periodic table and a lab experiment making peanut brittle reeled her in.

“It opened my eyes that science and chemistry are in everyday life,” Toledo said.

Soon after transferring to SF State to pursue her bachelor’s degree, Toledo was offered a position in a professor’s chemistry lab, where she has conducted research ever since.

Toledo has been awarded a National Institutes of Health Maximizing Access to Research Careers fellowship, among other honors. Her thesis, “Biophysical Characterization of Structural and Energetic Differences Between H2A and H2A/H2B Heterodimer Variants from C. elegans,” helps reveal the structural basis for gene expression modulation during the course of development and provides insights into diseases with pathologies in gene expression, such as cancer.

Toledo also mentors other students, serving as a positive ambassador for women in the sciences. She has been accepted into Ph.D. programs at several top research schools, and her thesis work is being readied for publication.

Toledo said she wants to continue researching proteins while teaching others, so her ultimate goal is to become a research professor. “I want to get other people excited about the science that excites me,” she said.