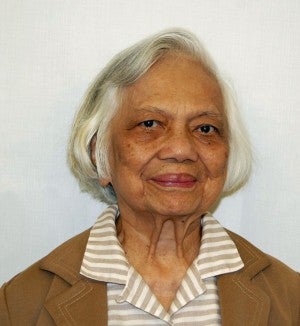 Born in Cadiz, Negros Occidental, Philippines on February 25, 1928, to Fortunato and Visitacion Escalona Kakilala, Sister Reina Paz (christened Camilla Kakilala) entered Maryknoll on September 6, 1950 at its motherhouse in Ossining, New York, from Santo Nino Parish, Bacolod and made her final vows on March 7, 1959 in Manila.

A graduate of Negros Occidental High School and Institute in 1947 and Maryknoll Teachers College with a bachelor’s in education in 1955, she also studied for a year at University of Santo Tomas and Colegio de San Augustin, as well as LaConsolacion College, all in the Philippines.

Following her first profession of vows in 1953, Sister Reina Paz served in her native Philippines for her first ten years with Maryknoll, teaching first and second grade children at Maryknoll College in Manila from 1955-1962, serving as supervisor of a Maryknoll school in Jimenez from 1962-1965, then as assistant principal of Maryknoll grade school in Manila from 1965-1970. She also worked in community development in the late 1960s.

Sister Reina Paz then went British Columbia and Alberta, Canada, where she worked for a religious education institute from 1970-1971. She then returned to the United States where she was “missioned” to Stockton, California. There she helped organize community projects to help retired farm workers in the vicinity find employment from 1971-1974

Sister was also a prolific poet, having written hundreds of poems. She received the Golden Poet Award in 1989. Her poetry is included in the American Poetry Association’s anthology, the New York Poetry Anthology and Poetic Voices of America. She was also honored by the National Library of Poetry winning its Editor’s Choice Award in 1988. Sister Reina Paz was also honored at the San Francisco International Women’s Year Conference, October 24-25, 1975, for her work among women as a role model “that had encouraged all women to break through the barriers of discrimination.”

Sister Reina Paz returned to the Maryknoll Sisters Center in 1986, where she worked in its Promotion Department and as a driver for elderly and infirm Sisters until her retirement in 1993. She is survived by her brother, Fortunato Kakilala of Nappanee, Indiana; two sisters. Gregoria Naldo of Silver Springs, Maryland, and Paulita Javier of Quezon, Philippines; a niece and a nephew.