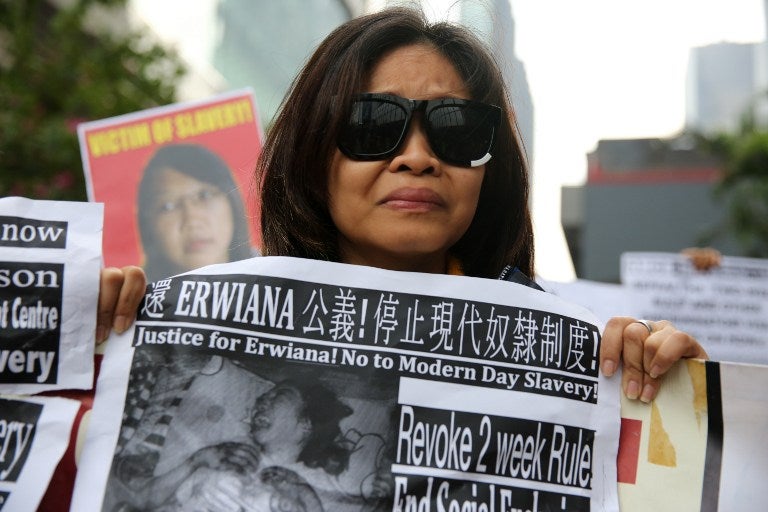 HONG KONG — A Hong Kong employer accused of starving and beating her Indonesian  maid treated the woman as an “unpaid slave,” prosecutors said Tuesday on the last day of hearings in a case which has shocked the city.

In the course of the six-week trial, 23-year-old Erwiana Sulistyaningsih described in vivid detail how she was “tortured,” living for months on nothing but bread and rice, sleeping only four hours a day and being so badly beaten by her then-employer Law Wan-tung that she was knocked unconscious.

Pictures of Sulistyaningsih, who was admitted to hospital in Indonesia last January emaciated and in  critical condition, sparked widespread anger in her home country and even drew comment from the president.

In closing arguments prosecutors admitted it was “difficult to determine” when the injuries were inflicted but concluded that Sulistyaningsih was enslaved by Law, 44, who denies all charges of abuse.

“The defendant was never satisfied with her work. The question was why did it take seven months for her to send her away? This certainly defies common sense. The only explanation was that (Sulistyaningsih) was treated like a slave, an unpaid slave,” said prosecutor Louisa Lai.

Law’s defense accused the former maid and another two domestic helpers involved in the case of being “opportunistic.” They said that if Sulistyaningsih’s account were true it would “amount to a horror story.”

“The evidence of Erwiana is unsatisfactory… so exaggerated as to impact on its truth,” said defense lawyer Graham Harris.

He suggested that her injuries could have been accidental.

“Can you rule out as a reasonable hypothesis that any scar or any damage might have been caused by accidental falls?” he asked the judge.

The case has shone a spotlight on the plight of migrant domestic helpers in Asia and the Middle East after reports of torture and even killings.

In March last year a Malaysian couple were sentenced to hang for starving their Indonesian maid to death, while in the same week a Singaporean couple pleaded guilty to abuse after their helper lost 20 kilos in seven months.

Such cases have prompted a clampdown on domestic worker visas in some countries — Myanmar suspended a seven-month-old scheme in September and Indonesia has pledged to stop sending domestic workers abroad from 2017.

Law faces 21 charges — also pertaining to two other former domestic helpers — including grievous bodily harm with intent, criminal intimidation and failure to pay wages. The most serious carry a maximum sentence of life in prison.

Sulistyaningsih and Law were both in court Monday but neither made a statement.

Protesters outside the court shouted “Justice for Erwiana!” and held placards reading “We are not slaves.”

The verdict was set for February 10.