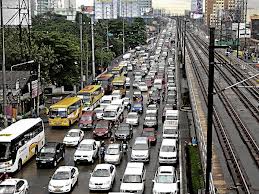 MANILA, Philippines – The Philippines ranked ninth in having a deplorable traffic situation in the world, a recent study by a Serbia-based research firm revealed.

Numbeo collated data on the traffic situation of 88 countries for its 2015 Traffic Index, showing that the Philippines obtained a “traffic index” of 202.31.

The Philippines also ranked fourth in having the worst traffic situation in Asia, trailing after Bangladesh, Jordan and Iran.

Filipino motorists spend an average of 45.50 minutes on the road for a one-way travel.

The research firm also quantified the dissatisfaction felt by motorists and commuters as revealed on the “Time Experience Index” where the Philippines registered a 3,724.39 dissatisfaction rate.

Kenya had the worst traffic situation in the world with a traffic index of 317.24 and motorists there spending 65.20 minutes on the road to get to their destination. Meanwhile, Turkmenistan had the lowest traffic index, indicating that it had the most efficient traffic situation among the 88 countries involved in the study. Turkmen only have to spend 11.75 minutes for a one-way travel.

The data and information available on the Numbeo’s website are crowdsourced.

Numbeo’s founder Mladen Adamovic said that data and information presented on his firm’s website are not being influenced by any government.

Read Next
Pope Francis leaves door open to Dalai Lama meeting
EDITORS' PICK
House to probe Facebook takedown of gov’t accounts
Water remains our saving grace right now
Feud is over: Velasco next Speaker on Oct. 14
Get 80% OFF Ignite 2020 Cyber Tickets starting 28 September
Duterte meets with Cayetano, Velasco amid speakership issue
Smart poised to turn PH into ‘Smart 5G country’ with nationwide rollout
MOST READ
Velasco to take over as Speaker on Oct. 14
Gun attack in PMA: Air Force man killed, 2 others wounded
‘I offered to resign’ because of endless corruption, says Duterte
Duterte meets with Cayetano, Velasco amid speakership issue
Don't miss out on the latest news and information.