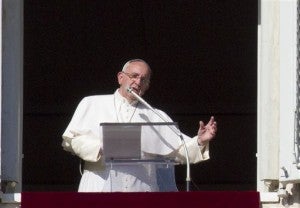 TACLOBAN CITY, Philippines—The Vatican has requested that the names of 30 survivors of Supertyphoon “Yolanda” (international name: Haiyan) and the 2013 Bohol earthquake who will share lunch with Pope Francis in Palo town, Leyte province, on Saturday should not be disclosed to the public to ensure their “privacy.”

“Even the survivor themselves have requested that their privacy be safeguarded. So, let’s respect them,” said Archbishop John Du of the Archdiocese of Palo.

Du’s statement came a day after the names of the five quake survivors appeared in an Inquirer story on Tuesday.

The survivors will dine with Francis at the Archbishop’s Palace in Barangay (village) Arado in Palo, right after he officiates Mass at the apron of Daniel Z. Romualdez Airport in Tacloban.

Francis will travel to Palo in a motorcade, but the Vatican has suggested that people welcome him with banners bearing not his pictures but the faces of Jesus, the Blessed Virgin Mary and the saints, according to Fr. Amadeo Alvero, head of the information and social communications committee of the papal visit to the Archdiocese of Palo.

Du particularly called on the faithful to carry banners that say: “God is merciful and compassionate.”

The Vatican instruction is perceived as a sign of the Pope’s personal disposition of humility and submissiveness to Christ from whom his official title stems, Alvero said in a post on papalvisit.ph.

However, greetings may mention the pastoral visit’s theme “Mercy and Compassion” and images of Jesus, Mary or the parish patron saint are allowed, said Dalmacio Grafil, a member of the event’s local information committee.

Of the 25 survivors of Yolanda, the strongest typhoon to make landfall in the world, 15 will come from the Palo archdiocese and five each from the suffragan dioceses of Calbayog and Borongan.

Their presence during the lunch with the Pope would only be symbolic as they “represent” all of Yolanda survivors, Du said.

“The Holy Father coming here is for everybody, but he cannot meet them all at the same time. It’s just kind of ceremonial. They will represent all the survivors of Yolanda. When the Pope meets them, he is actually meeting not only them but everybody,” he said.

“He is facing these people on behalf of those who are still suffering (due to Yolanda),” he added.

Lingayen-Dagupan Archbishop Socrates Villegas, the president of the Catholic Bishops Conference of the Philippines, said the lunch would not be for media coverage but “exclusive for them.”

“No media, not even the papal party will join because the Pope wants it to be an intimate encounter with the victims of typhoon and earthquake,” Villegas said. “It must be a spiritual encounter between a Pope who condoles and the victims who need sympathy.”

“We will just issue a press statement about it but we don’t like it spoiled with too many cameras because these are people who have suffered so much and the Pope is very sensitive to their sufferings and we don’t like to reduce the event to another media event,” he said.

The survivors were selected from among the names submitted by the parishes within the areas severely hit by the storm to the archdiocese on the grounds of being the “poorest of the poor” and the extent of their loss of loved ones.

They will be housed “near the Archbishop’s Palace” two days or a day before the scheduled lunch with the Pope, Alvero said. Du, Manila Archbishop Luis Antonio Tagle and some interpreters will also be present during the event.

Du encouraged all the families who survived Yolanda to join in welcoming the Pope, the papal Mass and the motorcade, optimistic that this once-in-a-lifetime encounter would be an experience of “healing and hope.”

“This is a rare opportunity to experience the mercy and compassion of God through the apostolic mission of the Vicar of Christ on earth, the Pope,” he stressed.

Alvero said over a million ponchos, donated by private companies, would be distributed to pilgrims who will attend the Mass to protect them from possible rain. The Mass will push through even in bad weather, he said, but some activities might be delayed or canceled.

If the Pope, who is known for defying protocol, deviates from the rerouting set by the committees, the military is ready to carry out contingency measures, he said.

Alvero, in a separate post on papalvisit.ph, said he received assurance from the Presidential Security Group that telecommunications signals would not be jammed on Jan. 17 at the papal event sites. He, however, warned of a possible delay in signal transmission because of the volume of texts being sent and calls being made.

For those who are in pilgrimage to the airport, residents living along the road were requested to open their homes to them, providing them with free drinking water and use of restrooms.–With a report from Tina G. Santos in Manila