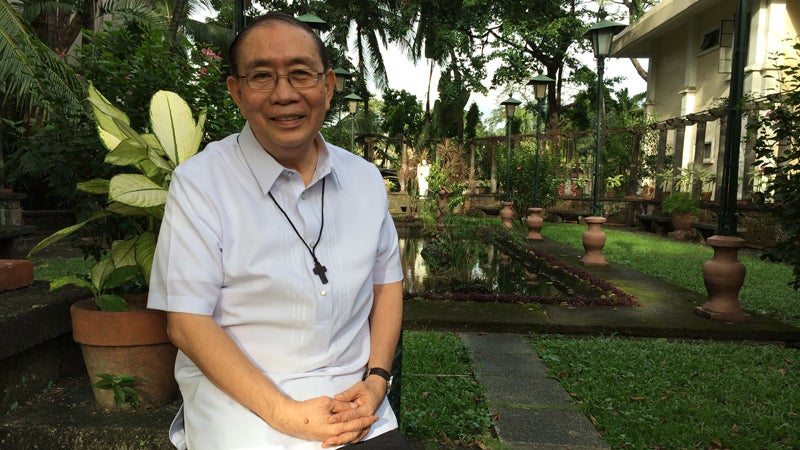 TAKING A BACK SEAT Fr. Eduardo Africa, who is behind preparations for the papal visit at the Apostolic Nunciature in Manila,makes way for the Vatican staff. VOLT CONTRERAS

MANILA, Philippines–“Everything will be about simplicity, befitting his personality.”

This could sum up the preparations made at the official residence of Pope Francis during his four-day visit to the Philippines, according to the first Filipino Benedictine abbot and longest-serving local staff member of the Apostolic Nunciature in Manila.

The atmosphere at the Embassy of the Holy See can be likened to “the quiet before the storm” that has been building up since August, said Fr. Eduardo Africa, who has been assistant secretary to four papal nuncios for the last 12 years.

“We (the staff) are just in the background as the Vatican group has taken over” major aspects of the papal visit, Africa said.

The event will be the fourth for the Vatican’s diplomatic post on Taft Avenue since it opened in 1902. The nunciature had been graced by two earlier Pontiffs, Paul VI in 1970 and John Paul II in 1981 and 1995.

Africa, 67, who founded a monastery in Mindanao in the 1980s and is also a professor of spirituality at Ateneo de Manila’s Loyola School of Theology, wouldn’t know what the Vicar of Christ is having for breakfast.

But he spoke at length about the feast for the soul that Francis would be bringing to the Filipino faithful.

“He’s really extraordinary. Just by the theme of his visit—mercy and compassion—Pope Francis is really making the Church open to everybody and not trying to exclude anyone,” Africa said in an Inquirer interview.

“There are some people who are afraid that he’s probably becoming too open—I don’t want to use the word ‘progressive’—but his idea is really to be like Christ. Christ reached out to the prostitutes, the tax collectors, so that’s why he (the Pope) says we cannot judge people. On gays, he said, ‘Who am I to judge them?’”

“So it’s really about opening the Church, really a breath of fresh air,” Africa said.

Too much on sin

“We (Catholics) were brought up with so much emphasis on sin—whether (what we are committing) is a mortal or venial sin. I’m not saying that that’s wrong, but (it has become) so much that our dominant idea of God is that of a judge ready to hit us back. But this (Pope) is really trying to go back to the Bible, to the image of God of being a true Father, a prodigal child’s Father, who is ready to receive us any time and give us the benefit of the doubt.”

Asked if he could note any visible or measurable impact of Francis’ 9-month-old papacy, like a growth in Mass attendance in the country, Africa said: “It’s really hard to talk of statistics, but I think people now will have a different view of the Catholic Church.”

The monk recalled how Francis, through his globally publicized events, has been “trying to veer us away from the idea of the Church being too exclusive.”

One example: Instead of washing the feet of clergy people during his first Holy Thursday service as a Pope, Francis had members of the laity, including two women and even Muslims, participate in the Lenten ritual.

“We have become, I guess, too self-righteous even as an institution. There should be more humility on our part,” Africa said.

Having grown up in Quiapo and being among the crowd every Jan. 9 for the Black Nazarene procession, Africa learned “probably the real theology, not one we studied in the classroom.”

Which brought him back to the Pope and his message. “He has been saying that we should be humble enough to go to confession for our sins. And the responsibility of the priest (in encouraging this) is quite big,” he said.

In his Korean tour last year, for example, Francis reminded priests “not to scold people. Comfort them, console them. Do not judge them. I really follow everything that he says and this is what he has been emphasizing.”

“And it’s really—oh, my goodness!—the heart of ministry,” Africa stressed.

“As a priest, I should show more the compassion and mercy of God. That poor fellow (seeking forgiveness) did not commit a sin against me. And just to speak to a priest is so humiliating; we’re not used to that, we’re just used to keeping to ourselves.”

“I have also given retreats to priests, and just like anyone we also need to grow spiritually,” Africa said. “Just because we finished theology, and even if you have a doctorate, that is not the end point of everything. It is not. It doesn’t follow.”

Drawn to monasticism in the 1970s, Africa became the first Filipino Benedictine abbot in 1980. He earned the title at 33, making him also the order’s youngest abbot in the world at that time.

But outside his scholarly life and prior to his service at the nunciature, Africa was most active as the founder of the Monastery of the Transfiguration in Malaybalay City in Bukidnon province, which he established in 1982.

Later this month, Africa’s San Beda High School Class of 1965 will be holding a golden jubilee reunion, with him officiating a Mass and holding a recollection for fellow alumni. The occasion would definitely see him being pressed for details by his classmates about his papal encounter at the nunciature.

But this much he can already say: “When a Pope is elected by the grace of the Holy Spirit, there is something that that person is contributing which no other can contribute. And the way I see it, at this time in history, there is a particular reason why this Pope is chosen. I want to believe this is the direction that the Holy Spirit wants us to take.”