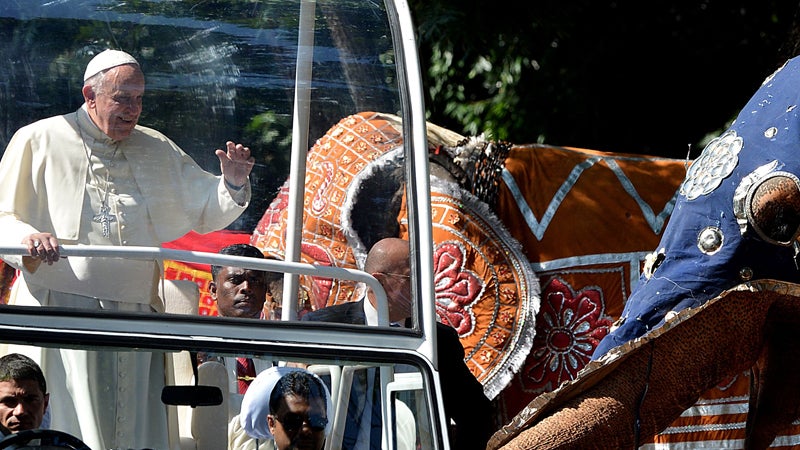 THICK-SKINNED HONOR GUARD Instead of passing under a traditional Arch of Swords, Pope Francis goes through a gauntlet of pachyderms elaborately dressed for his historic three-day visit to Sri Lanka. The Pope starts his weeklong visit to Asia with a first stop in this island nation where he brought a message of peace, healing and reconciliation after a quarter-century of ethnic civil war. AFP

COLOMBO, Sri Lanka—Forty elephants, a new president barely five days into office, and thousands of people welcomed Pope Francis Tuesday to predominantly Buddhist Sri Lanka where he is seeking to preach religious and racial harmony in a world where “so many communities are at war with themselves.”

Aside from Sri Lanka, the Pope will visit on Jan. 15-19 predominantly Catholic Philippines, where he’s expected to draw crowds as large or even bigger than the last visit of Pope, now Saint, John Paul II.

Tens of thousands of Sri Lankans lined up to catch a glimpse of the Pope in his open-air popemobile.

So numerous were the crowds that the popemobile had to crawl through them, delaying the Pope’s itinerary, forcing the cancellation of his meeting with Catholic bishops and leaders at the residence of Cardinal Malcolm Ranjit.

Although the affable Pope turned on the charm and smiled and waved broadly at the people, it was the presence of 40 elephants dressed in brilliant colors lining the street near the airport that particularly delighted him.

Beaming broadly at the elephants, the Pope, who took his papal name after St. Francis of Assisi, a medieval patron saint of animals, nodded delightedly and pointed to them, as if to bless them.

The highlight of the Pope’s visit will be the canonization on Wednesday of Blessed Joseph Vaz, the Oratorian priest from Goa, India, who ministered to persecuted Catholics during the 17th century when Sri Lanka was under the rule of the Calvinist Dutch.

In helping rebuild the Church of Sri Lanka, Vaz also had to learn the languages of the dominant Sinhalese and the minority Tamil, and coupled with his works of mercy for the poor, he is seen by Christians and non-Christians alike as someone who fostered interracial, intercultural, and interreligious dialogue and harmony.

The chartered Alitalia plane of the Pope landed at Colombo International Airport at 8:51 a.m. at the start of his second Asian tour after South Korea last August and the longest trip so far of his barely 2-year-old papacy.

The Holy Father was met by newly sworn-in President Maithripala Sirisena, who won last Thursday’s snap presidential election. The election was called by Mahinda Rajapaksa, who failed to extend his term over corruption scandals that deeply tainted his reputation for having crushed the Hindu Tamil Tiger rebellion in 2009.

Sirisena said that the apostolic visit of the Holy Father was “personally significant” for him since he had just been elected. He said that as new president his “responsibility is to restore freedom, democracy, people power and rule of law for the people and future generations.”

“I seek your blessing for the people of Sri Lanka,” he told the Pope.

The Pope said that his visit was “primarily pastoral,” but it is “also meant to express the Church’s love and concern for all Sri Lankans.”

The Pope lamented “the continuing tragedy in our world that so many communities are at war with themselves.” 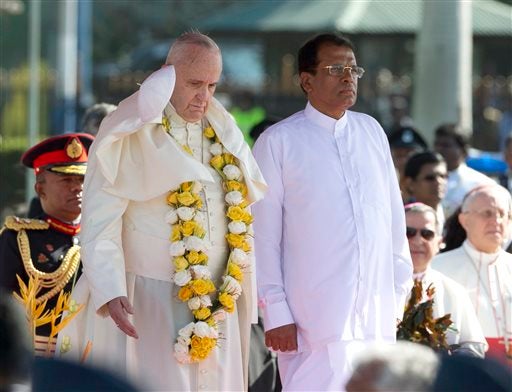 Pope Francis, center left, flanked by Sri Lankan President Maithripala Sirisena, center right, loses his skull-cap due to a blow of wind as he arrives in Colombo, Sri Lanka, Tuesday, Jan. 13, 2015. Pope Francis arrived in Sri Lanka Tuesday at the start of a weeklong Asian tour saying the island nation can’t fully heal from a quarter-century of ethnic civil war without pursuing truth for the injustices committed. (AP Photo/Alessandra Tarantino)

“The inability to reconcile differences and disagreements, whether old or new, has given rise to ethnic and religious tensions, frequently accompanied by outbreaks of violence.”

He said that Sri Lanka itself knows “the horrors of civil strife” and seeks now to foster better the peace. The Pope said this could be done only “by overcoming evil with good.”

Pope Francis said the great religions of Asia have their roles set out for them.

“Dear friend, I am convinced that the followers of the various religious traditions have an essential role to play in the delicate process of reconciliation and rebuilding which is taking place in this country,” the Pope said. “For that process to succeed, all members of society must work together; all must have a voice.”

In the Pope’s meeting with non-Catholic Christian groups and other religions, Bishop Cletus Chandrasiri Perera, OSB of Ratnapura, who heads the organizing committee of the Pope’s visit, called the visit “a sacred and unique event which goes down in the history of Sri Lanka, and particularly the history of the Catholic Church.”

“Most Holy Father,” he said, “in reality, Sri Lanka is a multi-religious society, the vast majority of the people being adherents of Buddhism. It is a singular honor and joy … to welcome Your Holiness into this interreligious and ecumenical gathering.”

Although Christians form only 10 percent of Sri Lanka’s 20 million population, more than 70 percent belong to the Catholic Church and are considered well-educated and respected members of the society. Catholic education is well-prized.

During the interreligious dialogue, the Pope witnessed the chanting of the ancient pirith prayer by a Buddhist monk, a religious blessing by a Hindi Kurukkal, a blessing by a Muslim Maulavi, and an ecumenical prayer by an Anglican bishop.

The Pope later handed over to the bishops’ conference a replica of a document from the Vatican archives of the “Sannas,” a late 17th century copper engraving issued by King Keerthai Sri Rajasinghe of Kandy permitting the preaching of Christianity and allowing Sinhalese to convert.

Earlier, in his visit to the presidential palace, the Pope gave President Sirisena a replica of a nautical atlas from the Vatican Library attributed to Bartolome Olivera of the 16th century showing Ceylon, the former name of Sri Lanka.

Dominican missionary friar, Fr. Gaspar Sigaya, said the Pope was seeking to bring about “dialogue among religions and cultures.”

“Amidst diversity of religions, cultures, practices and traditions, the dialogue aims to unify everyone for peace,” explained Sigaya, archivist in Rome of the missionary order of the Dominicans.

Pope arrives in Sri Lanka on leg of Asian tour