MANILA, Philippines—The visit of Pope Francis to the Philippines is focused on consoling the survivors of Supertyphoon “Yolanda” and the events slated in Manila are dispensable additions, Archbishop Socrates Villegas said on Monday during the Inquirer Conversations held in the University of Santo Tomas (UST).

“Let us not forget that the primary reason for the visit of Pope Francis is to console the victims of Yolanda. The Manila event and the UST event are just add-ons. If we have to prioritize, UST can be removed, Luneta can be removed, but not Tacloban and Palo,” the president of the Catholic Bishops’ Conference of the Philippines said. 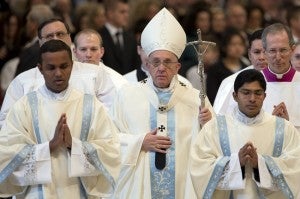 Pope Francis leaves at the end of a New Year Mass he celebrated in St. Peter’s Basilica at the Vatican, Thursday, Jan. 1, 2015. AP

Villegas said the “centerpiece” of the January 15 to 19 papal visit is the stop in Palo, Leyte, where Pope Francis is set to have lunch with Yolanda survivors.

Pope Francis chose to come to the country to be with “Jesus Christ living in the Philippines,” Villegas said.

The pope will say Mass upon arrival at the Tacloban City airport on January 17 before proceeding to Palo.

He will also bless the Pope Francis Center for the Poor of the Archdiocese of Palo and will offer prayers and light a candle at the mass grave behind Palo Cathedral.