Pope Francis to use 3 popemobiles in PH visit 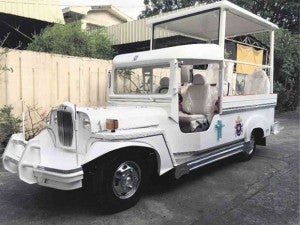 POPE FRANCIS’ RIDE A new popemobile to be used by Pope Francis during his visit is a takeoff from the jeepney, a symbol of Filipino ingenuity. CONTRIBUTED PHOTO

MANILA, Philippines–The Catholic Church on Monday clarified that three vehicles will be used by Pope Francis when he visits the country on January 15 to 19.

Bishop Ruperto Santos, the official in charge of the pontiff’s transportation, said three popemobiles will be made available for Manila and Tacloban, as well as for backup.

“Our vehicles are ready. These have already been secured by the government,” he said in Filipino during a press briefing at the papal visit media and information headquarters in Intramuros, Manila.

He said two of the vehicles were made by local manufacturers and the other is from South Korea, the same one Pope Francis used for the World Youth Day in Seoul.

However, they could not reveal which one will be used in Manila or Tacloban.

The Philippine Daily Inquirer last week reported that one of the popemobiles was designed after the iconic jeepney.

ADVERTISEMENT
Read Next
Papal visit centers on ‘Yolanda’ victims, Manila schedule can be changed
EDITORS' PICK
IATF to LGUs: Issue ordinances vs attacks on frontliners, COVID-19 patients
Nograles: Cabinet members to donate 75% of monthly salary to aid COVID-19 fight
Diokno to Duterte: OK to make fun of buck tooth, but focus on people’s needs first
10 Filipinos positive for COVID-19 in UK, 7 in Ireland — envoy
Quick chat with Nicole Andersson: ‘You really don’t need much to be happy’
Robredo spox thanks Duterte for defending VP’s efforts vs COVID-19
MOST READ
Gov’t mulling quarantine period extension of 15-20 more days
Sotto on Isko Moreno’s call: We do our job without the media following our every move
Cook more and eat less: Tips on your quarantine diet
ADB warns PH against prolonged lockdown
Don't miss out on the latest news and information.