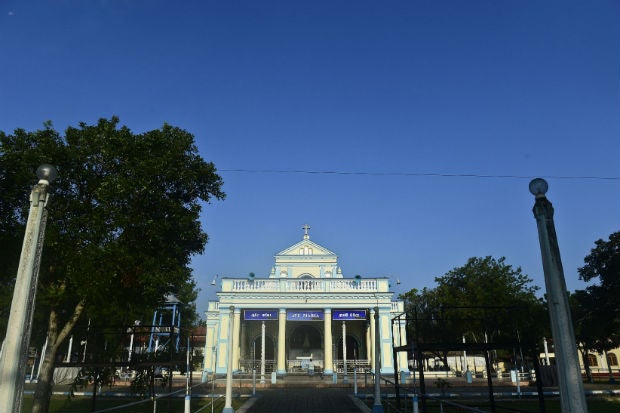 A picture taken on January 11, 2015, shows a general view of The Our Lady of Madhu church in Madhu. A small church nestled in a Sri Lankan wildlife reserve was on the frontline of the island’s decades-long civil war, but is now preparing for the first ever papal visit seen as a beacon of harmony. AFP / MUNIR UZ ZAMAN

MADHU — A small church nestled in the Sri Lankan jungle, seen as a beacon of harmony in a country with a dark history of conflict, is preparing for a visit from Pope Francis who will bring his own message of peace.

Our Lady of Madhu church, in a remote wildlife reserve in the island’s north, was on the front line of a decades-long civil war between Sri Lanka’s army and separatist guerrillas seeking an independent homeland for the Tamil minority.

The church is a pilgrimage destination for Catholics from both the Tamil and the majority Sinhalese communities, making it a rare symbol of reconciliation in a country riven by ethnic and religious divisions.

They come to pay homage to a 450-year-old statue of the Virgin Mary that also attracts visitors of other faiths seeking to benefit from her miraculous powers — reputed to include protection from the poisonous snakes that inhabit the jungle.

Priest Emilianuspillai Santhiapillai expects at least half a million people to attend on Wednesday when Pope Francis will fly in by helicopter for a religious service.

The first papal visit to the island in two decades comes after the surprise ousting of former president Mahinda Rajapakse, who oversaw the army’s violent suppression of the Tamil Tiger rebels in 2009 and faced criticism for failing to bring about post-war reconciliation. 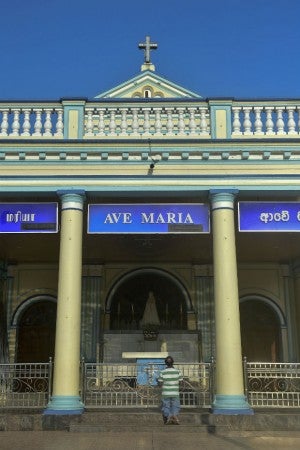 A picture taken on January 11, 2015, shows a general view of The Our Lady of Madhu church in Madhu. A small church nestled in a Sri Lankan wildlife reserve was on the frontline of the island’s decades-long civil war, but is now preparing for the first ever papal visit seen as a beacon of harmony. AFP / MUNIR UZ ZAMAN

The pope is expected to bring a message of ethnic and religious harmony — an idea that chimes with the hopes resting on Sri Lanka’s new President Maithripala Sirisena, who enjoyed strong electoral support among Tamils and other minorities.

“He (Rajapakse) could have done more things for the Tamils. We don’t want to have fighting in Sri Lanka.”

Sri Lanka is a majority-Buddhist country, but it has a sizeable Catholic minority, accounting for around six percent of its 20 million people. Hindus represent around 13 percent and are mostly Tamil.

“This is a holy shrine for all people in Sri Lanka, there is no religious difference shown,” Santhiapillai told AFP in Madhu.

“Catholics, Hindus, Buddhists and Muslims all come here for the harmonious and peaceful atmosphere.”

When Pope John Paul visited the island in 1995, the north was still a no-go zone, and the church completely inaccessible.

Four years later the shrine was hit by artillery, killing 38 people who had sought refuge from the violence, including 13 children.

That the statue was unharmed only added to its mystique. But at the height of the fighting in 2008 Santhiapillai decided to smuggle it out of the area, fearing for its safety.

“All the refugees had left and intense war had broken out. It was not advisable to stay here,” said the priest, a Tamil who had to convince a skeptical army that he had not handed the precious icon to the Tigers.

“Both sides suspected us of being with the other,” said Santhiapillai, who returned to the church in 2009 with the statue — now encased in bullet-proof glass.

Since then, the once heavily land-mined area has been made safe for visitors and a tarmac road has been built.

Deer and peacocks now inhabit the surrounding jungle and hundreds of thousands of devotees flock there every year for the annual feast in August.

Two services are held every morning, one in Tamil and one in Sinhala, and worshippers come from far afield to attend.

Madhu has been a pilgrimage destination ever since the shrine was established in the 17th century by a group of Sri Lankan Catholics fleeing persecution by the country’s Dutch colonial rulers.

In honour of the papal visit, a new chapel has been built alongside the 19th-century church that houses the statue, and Santhiapillai says he hopes the pope will consecrate it.

Dominic Jencily, a volunteer at the Madhu church who lost his brother in the war, voted for the first time in last week’s election.

The 19-year-old Tamil is confident the country will change for the better under Sirisena — and believes the pope’s visit is the icing on the cake.

“He is the representative of God,” Jencily told AFP.

“This is our chance to connect with him at a time of tremendous change in our country.”

Pope’s trip to Sri Lanka and Philippines: 5 things to know