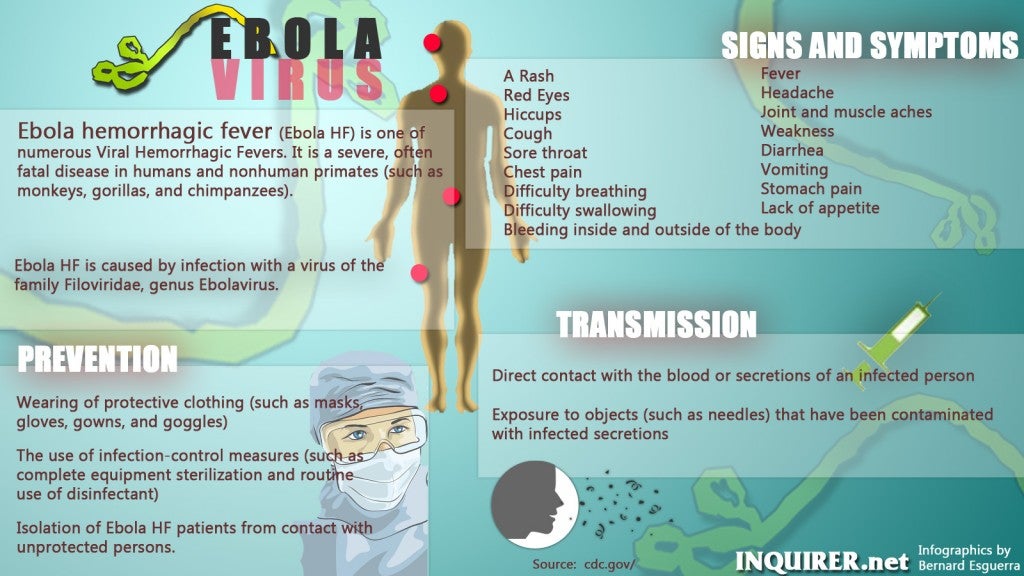 No worries. President Benigno Aquino III has not yet decided to send health workers to West Africa to help fight the worst outbreak of the deadly Ebola disease, Malacañang said on Saturday.

Former Health Secretary Jaime Galvez-Tan opposes the idea, recommending instead that the Philippines keep a core of medical workers to prevent the entry of the Ebola virus into the country.

Galvez-Tan said the government’s priority was to safeguard the country’s borders against the entry of the Ebola virus, as many Filipino travelers and migrant workers come home from African countries.

If at all, the Department of Health (DOH) should send a team of five medical volunteers to study how West African countries deal with the virus and apply the system in the Philippines, Galvez-Tan said on Saturday.

President Aquino needs to make a delicate balance between heeding the call of the international community for a united global action to combat the deadly disease and safeguarding the health of the Filipino healthcare workers who would be exposed to the virus, Lacierda said in a statement.

The President also needs to take into consideration the health of the general population when the medical volunteers who will be sent to West Africa return after their tour of duty, Lacierda said.

Health Secretary Enrique Ona said at a summit on the Ebola outbreak on Friday that the Philippine government would have to decide soon whether to send medical volunteers to West Africa to help care for Ebola patients in response to a call by the international community for nations to help each other in arresting the spread of the deadly disease.

But Galvez-Tan advised against sending volunteers to the Ebola hot zone.

Let others handle it

The government needs its own medical professionals to “safeguard its own interest first,” said Galvez-Tan, president of Health Futures Foundation Inc., a nonprofit organization involved in the design and management of health and social development programs.

“If we have a duty to preserve, protect or even treat or prevent Ebola in the Philippines, our health professionals [should] stay in our country,” Galvez-Tan said.

The government should maintain a core of 100 medical professionals on heightened alert against Ebola, said Galvez-Tan, who served as health secretary in the administration of President Fidel Ramos.

“We should have a critical mass of health professionals all over the country who are knowledgeable about Ebola and who would keep a double eye, a triple eye on Ebola incidents if ever there are any in the Philippines,” he said.

A single carrier of the Ebola virus entering the country would require thorough surveillance, from the point of entry to their final destination, and medical workers at every point should stay alert, he said.

“That in itself is part of the global action for prevention of further transmission of the disease,” he said.

Should the DOH decide to send a team to West Africa, Galvez-Tan said, it should send five medical workers to study how people there and in Europe handle Ebola cases.

“I have no problem with sending a team to be aware and be capacitated to help in learning how to deal with Ebola if and when it reaches the Philippines,” he said. “We’re talking of real experiences in dealing with Ebola.”

But the Philippine Red Cross (PRC) said it was ready to deploy staff and volunteers to West Africa to help care for Ebola patients.

“We have to contain the Ebola virus in those areas so as to protect our borders,” PRC Chair Richard Gordon said in a statement on Saturday.

“In this day and age of air travel, we have to make sure that we have the necessary mechanisms in place to detect the Ebola virus at our airports, and have prepared isolation facilities when necessary,” Gordon said.

The World Health Organization said on Friday that 4,033 people have died from Ebola as of Oct. 8 out of a total of 8,399 registered cases in seven countries.

The United Nations and leaders of Ebola-stricken nations of Guinea, Liberia and Sierra Leone pleaded on Friday for greater help for the front-line of the disease in Africa.

The US Centers for Disease Control and Prevention (CDC) predicted the number of cases could reach 1.4 million by January unless strong measures are taken to contain the disease.

Leaders of hard-hit Guinea met Friday with IMF Director Christine Lagarde, who promised the organization was “ready to do more if needed” to fight the disease.

UN Deputy Secretary General Jan Eliasson appealed for more funds to fight the disease. He said only a quarter of “the one billion dollars sought” to combat the disease had been pledged. He appealed for doctors, nurses and other health-care personnel to come forward. With reports from Tina G. Santos and AFP

There’ll be no stopping Ebola spread in PH, says expert

DOH gives tips on how Filipinos can avoid Ebola virus