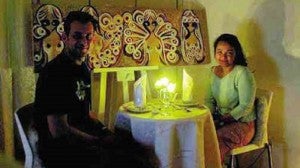 She was a great fan of British classical literature. At 7 years old, when most kids played tumbang preso, she read Charles Dickens, Jane Austen and Thomas Hardy.

Upton’s love for words prompted her to start writing at 6. She remembers being summoned to the principal’s office, accused of “plagiarism” by her teacher. But the verses they thought were copied from the “Poems of Great Britain” were hers.

Fast forward—she would write a book of poems titled “Fragments of the Moon” about finding a way to cope with the loss of her father.

But nowadays, who would want a poetry book?

But if you tell people that it’s on DVD or movie format, they might want it. Thus, Upton’s video poetry book was born.

Friends from the advertising industry helped Upton put this dream project together. Released on limited edition. 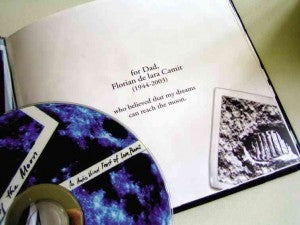 “Fragments of the Moon” was the Philippines’ first video-poetry book, a confirmation that Upton finally made it as a writer. She, too, could not believe seeing copies of her book being sold at two fine Manila bookstores. The milestone paved the way for her to meet other video-poetry enthusiasts in the Philippines and around the world.

She was even invited to a poetry arts festival in England where she received numerous plaudits.

Growing up in Pasay

Upton grew up in a tiny apartment in Pasay City, the middle child of six. As a child, she already saw things in a different light.

“I told my classmates in school that we were quite well-off as our house was along a private road. The truth was, it was quite narrow and can fit only two tricycles.”

Looking back now, she felt very proud of the fact that their house had stairs and a gate. “I used to invite my friends around and gave them a ‘tour’ pretending it was a museum.”

When her poem was first published on a national magazine, Upton was so thrilled she kept it under her bed for a month and read it again and again in disbelief. More pieces came next and more publications printed them, she was also happy she got paid for them.

Upton was always the editor of her high school paper and won interschool writing competitions. As an AB Communication Arts student at the University of Santo Tomas (UST), Upton pioneered a group called Labyrinth, inspired by the movie Dead Poets Society.

“We would meet every Friday afternoon just to savour the verses of Keats, Byron and Tennyson.” She also tried other genres and won three major awards in USTetika, UST’s prestigious writing competition.

As a copywriter trainee at McCann Erickson Philippines, her first job, she thought she was incredibly lucky surrounded by talented and creative people. She was hired by DDB Philippines next where she spent most of her advertising career. 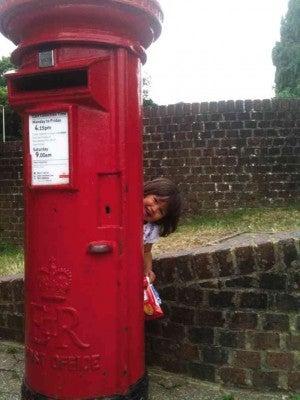 “I immensely enjoyed my job in advertising. I felt like I was being paid to do something that I’ve always wanted to do. Someone even said that it’s the only job in the world where you can live like an artist and be paid like a banker.”

She remembered the days when writing copy for a big telecom account: “It was so demanding we actually had bunk beds in the office ready for the graveyard hours. Once you’ve clocked in the morning, you’ll never know when you are clocking out.”

Upton’s love story started one fateful night when she purchased her first laptop, a secondhand MacBook. Not knowing how to use it, she went to the Techno Geek forum online and found a chat forum. Someone called “Shade2_UK” explained to her everything patiently.

Their conversation shifted from Macs to Macbeth and she would later find out that Shade2_UK was a graphic designer and graffiti artist named Graham Upton. They chatted nonstop for 13 hours, only stopping for tea breaks. Graham started calling her and paying hundreds of pounds just to speak to her on her mobile for hours. They soon progressed to Skype, and he expressed an interest of visiting her.

On his first trip to the Philippines, Graham was met by a panel interview in her home.

“My mom was the judge and my sister, one of the barristers,” she relates.

When they went to the cemetery, Graham went down on his knees and scraped some mud off her dad’s grave. He said: “There you are, Sir, nice and lovely, like your daughter.”

After that, Upton knew she found “the one.”

Graham would fly to the Philippines several times, and on his fifth visit, at the departure lounge of Ninoy Aquino International Airport, he asked the ultimate question. She said “yes.”

Fresh from their honeymoon and ready to start a future together, Graham was greeted by a letter from his then boss saying his design company has gone into administration and had to let him go.

“We had no choice but face the sad news.”

The couple had to share a house with Graham’s friend. Days rolled on, and they had to survive on almost nothing.

“We couldn’t even keep the heater on as it was expensive to use. It didn’t help that it was the middle of winter. It was dark and dreary and it rained almost every day. There was a time when I became really ill with a nasty cough. Graham crept in the middle of the night to unlock his friend’s cupboard and steal a bit of cough medicine for me. That was the lowest point of our lives I think.”

Graham quickly signed up with a job agency the next morning. He told Upton: “I promise you, I’ll do whatever it takes to make sure we always have food on the table and a roof under our heads.”

“I had to conceal the situation to my family and friends back home. I told them I did a lot of jogging and swimming at the local gym and find English tea really slimming,” she confides.

Upton eventually landed a job as a receptionist for a primary school in a rough area. “I’ve never seen anything like it: Children as young as 6 would curse their parents at the school gates. At one instance, I had to phone for an ambulance as the head teacher had a heart attack while having a screaming match with a rude student,” she continues.

Upton started to do work for local charity sectors. She knew that she couldn’t forever conceal the fact that she still wanted to make use of her talent. She volunteered as a marketing consultant, giving advice to small charities on how to improve their advertising campaigns. This boosted her curriculum vitae, and made her more familiar with the British way of work life.

After a year of training and hard work, she landed a job at the local court, which she thoroughly enjoyed. Upton became a case progression officer for the high court judges, barristers, solicitors and the general public.

Graham, on the other hand, got a job as a graphic designer for a rich local council. After years of determined hard work, the couple was able to get a mortgage and buy their first home. The first thing they did when they moved in was buy cough syrup.

Upton gave birth after five years of living in the United Kingdom—from a high-risk pregnancy. Her baby, Sophia, now 2 years old, has grown to be a pretty little girl.

Upton is currently in the process of putting together an online support group for Filipino moms living abroad who suffer from postnatal depression.

“I miss the sun in the Philippines. The sun makes a rare appearance in this part of the world. I guess that is the reason why most Europeans suffer from depression. Imagine dealing with gray clouds, rainy weather, freezing temperatures for nine months in a year. That can just make you cry.”

For anyone who’s attempting to migrate to Britain, Upton has this to say: “Be prepared to bring a sturdy umbrella, boots and raincoat as they will be your permanent outfit. Get ready to remind yourself to put “u” in colour, “s” in organization, and “y” in tyres. Remember, it’s “lift” and not “elevator” and it’s a motorway, not a highway.

Is life easier out there? “If he keeps that Macbeth thought close to his heart: ‘To thine own self be true,’ he’ll definitely shine,” she concludes.