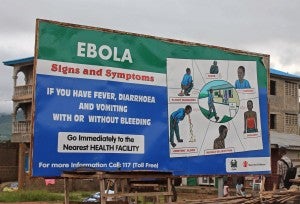 In this photo taken on Monday, Aug. 4, 2014, a public information board explains the symptoms of the deadly Ebola virus in the city of Freetown, Sierra Leone. AP FILE PHOTO

MANILA, Philippines – Malacanang on Tuesday said it was unlikely that the government would send volunteer health workers to West Africa to aid in the campaign against Ebola virus.

(As a member of the United Nations we are ready to help in the international campaign against the spread of Ebola virus. But that particular aspect, the sending of health workers, is another issue because we have a lot of things to consider.)

He said they have to take into consideration the situation of the nurses and doctors that would be sent.

At the moment, there are still Filipino peacekeepers in the area and that issue has not been resolved, Coloma said.

(So perhaps we should address that first before looking at such possibilities.)

Media reports said the World Health Organization (WHO) was calling for a large number of health workers to help address the Ebola outbreak.

The Philippine government announced the recall of Filipino peacekeepers from Liberia, one of the countries affected by the outbreak.