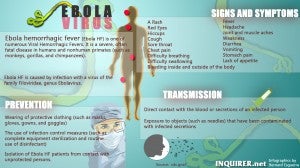 MANILA, Philippines—The Philippine College of Physicians is open to the idea of getting involved in efforts to contain the Ebola virus provided it is done on a purely voluntary basis and the volunteers are amply trained and given adequate protection from the deadly virus.

“Our medical workers who would be deployed in Ebola-hit areas need to be trained and geared up for the exposure, knowing the high mortality rate,” Dr. Tony Leachon, president of the PCP, said in a telephone interview.

The Inquirer sought Leachon’s comment in light of appeals for the international community to do more to contain the spread of Ebola, which has claimed the lives of more that 4,000 people in the most serious outbreak ever of the deadly disease in West Africa.

“We need informed consent, too. Medical workers who are willing to go should know the possible consequences or risks they’ll be facing when they get to those areas,” he added.

Leachon said that there should also be a system of indemnification for the families of the volunteers should they get contaminated by and succumb to the virus.

“The government should ensure that the families of the medical workers are properly indemnified in the event that something bad happens to the volunteers,” he said.

He said it was equally important that people in the travel sector be instructed and trained in infection control methods.

“Keep the regulatory authorities, like the Civil Aviation Authority of the Philippines, informed and involved in decision-making,” Leachon said.

According to him, members of the PCP are open to joining the humanitarian effort to stop the spread of the virus as they acknowledge the need for Filipinos to be engaged and helpful.

“We should not underestimate the capacity of our medical doctors to help,” he said.