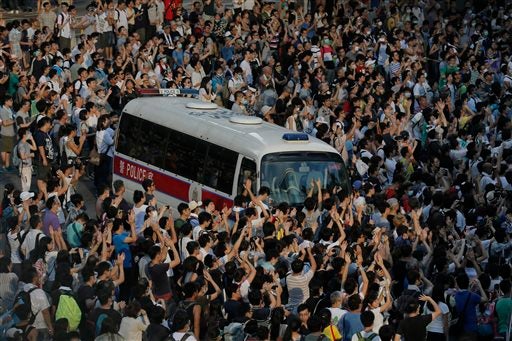 A police car is blocked by protesters after thousands of people block a main road to the financial central district outside the government headquarters in Hong Kong, Sunday, Sept. 28, 2014. AP

MANILA, Philippines – The Department of Foreign Affairs (DFA) has not received any reports of Filipinos being injured or involved in the ongoing protests in Hong Kong.

“We are monitoring closely the situation in Hong Kong to ensure the safety of Overseas Filipino Workers (OFWs) there,” DFA spokesman Assistant Secretary Charles Jose said in a press briefing Monday.

“Our position is that we hope both sides will express their views in a peaceful manner,” he said.

Thousands of pro-democracy protesters occupied a busy highway near government offices Sunday after China decided to limit political reforms in the semi-autonomous city particularly on the elections in 2017.

The Philippine Consulate General in Hong Kong has issued an advisory urging the around 185,000 Filipinos in the city to avoid going to, and participating in, the demonstrations particularly in the areas of Causeway Bay, the Wan Chai nightlife district as well as across the harbor in densely populated Mong Kok on the Kowloon peninsula.

Reports said that as much as 200 bus routes have been canceled or diverted because of protests while subway exits have also been closed or blocked.

News reports also said that tear gas was fired to disperse protesters Sunday evening, but anti-riot police have since been withdrawn Monday as the protests died down.

“Our consulate is equipped and capable of taking care of the welfare and safety of our Filipinos there,” Jose said answering questions on what contingency plans are in place in case the demonstrations turn violent.

He declined to comment on how the Hong Kong government is handling the protests.