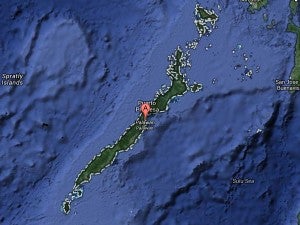 PUERTO PRINCESA, Philippines – Thousands of Philippine and US marines on Monday began military exercises close to flashpoints in the West Philippine Sea, where Beijing is engaged in a bitter territorial with its neighbors.

The 12-day amphibious landing exercises – involving about 3,500 US marines and sailors and 1,200 Filipino counterparts – were officially launched from the western island of Palawan, directly facing the South China Sea.

China claims the sea almost in its entirety, and its increasingly assertive efforts to stake its claims have heightened tensions with neighbors including the Philippines, which has conflicting claims to parts of these waters.

But Philippine marine spokesman Lieutenant Jerber Anthony Belonio stressed that the location of the opening ceremonies was not linked to the territorial dispute.

“This has no relation whatsoever. This is just to show the capabilities of our new marine landing brigade which coincidentally is based in Palawan,” he told AFP.

The Philippines has recently been beefing up its military assets in Palawan, the country’s main outpost to the South China Sea which is a vital sealane, a valuable fishing ground and which is believed to hold vast mineral resources.

The poorly-equipped military has also recently been boosting its ties with defense allies – particularly the United States, its former colonial power – in the face of Chinese sabre-rattling.

The US Marine Corps said the exercises would “enhance the interoperability between US Navy and Marine Corps forces and their Philippine counterparts with a focus on improving our bilateral response to regional issues and maritime security crises”.

This year’s exercises will include small arms and artillery live-fire training, a mechanized assault and paratroop operations.

The USS Peleliu, a US amphibious assault ship, along with two support ships, arrived at the former US Subic naval base on the weekend to take part in the exercises.

In April, the two allies signed a new defense accord giving US forces greater access to Filipino bases as part of a US rebalancing of military power towards rising Asia, which is seen by many analysts as a check to the emerging power of China.

Although the United States has taken no side in the territorial disputes, it has warned China against taking “destabilizing actions” in the South China Sea.

The sea is claimed in parts by Vietnam, Taiwan, Brunei, and Malaysia as well as China and the Philippines.

China has been involved in a string of tense maritime incidents with rival claimants in the South China Sea. Earlier this year it placed an oil rig in waters also claimed by Vietnam, sparking deadly riots in the Southeast Asian nation.