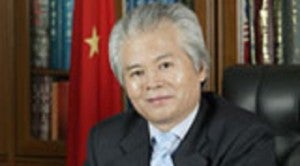 Wu Shicun, president of top state think tank National Institute for South China Sea Studies, is hopeful that relations between China and the Philippines will be better after the Aquino administration.

Wu also says China is unlikely to accept the decision—expected “around January to March in 2016”—of the International Tribunal for the Law of the Sea (Itlos) on the territorial dispute between Manila and Beijing, regardless of whether it is favorable or not.

“[Our countries] used to enjoy a good relationship—economically, politically,” Wu told reporters here during the Philippine Media Southwest China Cultural and Economic Familiarization Tour. “I’m optimistic about the future. Maybe after 2016, China will enjoy relations with the Philippines as before.”

“China has been enjoying the friendship of the Philippines at least before 2012, when the Scarborough Shoal (Panatag Shoal) issue happened. We hope that the relationship between our two countries can return to normal,” Wu said.

From early April to mid-June in 2012, Chinese and Philippine ships faced off at Panatag Shoal in the West Philippine Sea after Chinese vessels stopped the Philippine Navy from arresting alleged Chinese poachers.

In January 2013, the Philippines filed a motion for arbitration in Itlos as it sought a peaceful solution to its territorial dispute with Beijing.

China has rejected the proceedings, citing its “indisputable sovereignty” over the territory, but the case has progressed despite Beijing’s refusal to participate in the arbitration.

‘Not a good choice’

Wu, who was in the Philippines last December to discuss South China Sea issues with the academic community, said the Philippines’ move to file a motion for arbitration in a United Nations tribunal to settle the territorial dispute was “not a good choice.”

“To be honest, this administration has done little to improve bilateral relations,” Wu said. “The problem between China and the Philippines now is the lack of critical mutual trust.”

To build trust, Wu suggested a meeting between President Aquino and Chinese President Xi Jinping, and the withdrawal of the arbitration case.

“Another choice is to think about the possibility of withdrawing the arbitration case as a good gesture from the Philippine side, to show Philippine sincerity to improve China-Philippine relations.”

If everything goes smoothly, Wu said, the tribunal is expected to issue its final decision around January to March 2016. “No matter the tribunal’s final award, whether it favors China or not, China will likely not follow it,” he said.

“The only way to go forward is to put aside the South China Sea dispute, to discuss the possibility of improving our relationship.”

In September last year, President Aquino canceled a planned trip to China for a trade fair in Nanning after Beijing reportedly required the withdrawal of the arbitration case as a condition for the trip.

UN case not a challenge to China—Aquino

PH banking on united Asean vs dispute with China