Poe calls for Senate probe on ISIS recruitment in Mindanao 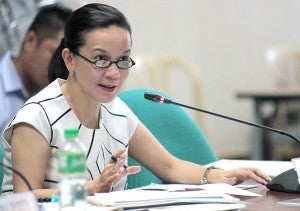 MANILA, Philippines – Senator Grace Poe wants the Senate to investigate the reported recruitment of Filipinos into the Islamic State to thwart any plans of the group to take root in the Philippines.

Poe has filed a resolution asking the Senate committee on national defense to look into the matter, in aid of legislation, in order to find ways to combat these developments and to affirm the country’s zero tolerance for any act of terrorism, extremism, and violence.

“The Philippines cannot afford to sit idly by while the ISIS continues to end lives of people worldwide in the most inhumane means imaginable,” Poe said in her resolution filed last week.

She said there have been reports that members of the Bangsamoro Islamic Freedom Fighters and the Abu Sayyaf Group have pledged allegiance to the IS, as shown by videos uploaded to YouTube. BIFF spokesperson Abu Misry Mama has also reportedly called up the Armed Forces of the Philippines to announce its allegiance to the IS.

Malacañang has said it is taking the group seriously, and has sought the help of the Moro Islamic Liberation Front and of civilians to keep tabs of developments on the ground and to help stop the possible entry of ISIS fighters into the country.

Poe said the government should not be passive about efforts to recruit Filipinos into the IS and about statements pledging support to the group. The group’s beliefs should not be allowed to prosper in the country, she added.

“The Philippine government, in its mandate to protect the State and our Filipino brethren, regardless of religion or belief, should actively prevent the seeds of the ISIS’ technology and teachings from being sown into Philippine soil and thwart any efforts of said group to influence and/or recruit our Filipino brothers and sisters in any and all parts of the country,” she said.

A military official has said that the Islamic State has no direct ties with the Abu Sayyaf Group and described the latter as just sympathizers of the group at the most, and who are jumping into the fray in order to elicit popular support.

Nevertheless, Philippine authorities are on the lookout for the group’s members, with immigration officials keeping a close watch on foreigners coming from the Middle East and Africa, especially from its troubled areas.

Immigration chief Siegfried Mison, in a television interview Saturday, said the bureau has gotten in touch with international organizations to get a list of people associated with the Islamic State.