UN case not a challenge to China—Aquino 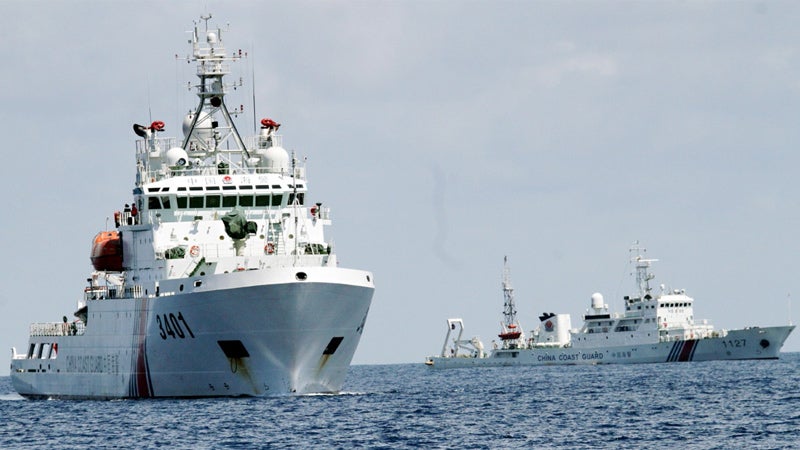 SILANG, Cavite—President Aquino on Monday said the government’s decision to pursue the arbitration case in a United Nations tribunal was not intended to provoke China but to defend Philippine territory peacefully.

The President said filing the case in the International Tribunal for the Law of the Sea (Itlos) was consistent with the country’s policy to resolve the territorial dispute through peaceful means “in conformity with international law.”

“We are not here to challenge China, to provoke them into any action,” he said after leading the 35th commencement exercises at the Philippine National Police Academy here. “But I do believe that they should recognize [that] we have the right to defend our own interests.”

Speaking a day after the government submitted to the Itlos a 4,000-page “memorial” detailing its case, the President said defending a country’s territorial integrity was something Beijing would have done too if it were the Philippines.

Aquino said he “cannot tell the Chinese government what to do” when asked about the possibility of Beijing harassing Philippine vessels even more following the filing of the memorial.

“If they were in our position, on the reverse, would they have acted differently?” he asked.

“Under different conditions, they are the smaller country, they are the less military-capable, they have interests, will they willingly just forgo their interests here? I don’t think so.”

The President paid “special tribute” to the team of soldiers that managed to evade a Chinese blockade and replace the Marine troops stationed at a grounded Philippine Navy ship on Ayungin Shoal.

“They accomplished the mission without, I believe, increasing the tension and did it in a way that didn’t pose a threat to any other country, again consistent with the peaceful approach,” he said.

“But we had to change the personnel there and provide them the wherewithal to survive on Ayungin Shoal.”

Beijing earlier warned that bilateral relations between China and the Philippines would suffer if Manila proceeded with the arbitration case. China has been insisting on a bilateral approach to settle the territorial dispute, an option that the Philippines has rejected.

Last Saturday, a Bureau of Fisheries and Aquatic Resources ship on a similar resupply mission was blocked by China. But the vessel managed to complete the task by maneuvering to shallow waters where the much bigger Chinese ships could not follow.

He said the United Nations Convention on the Law of the Sea (Unclos) provided a “rules-based” approach to “counterclaims” by “every coastal state that has certain entitlements and rights.”

By filing the case based on the provisions of Unclos, the Philippines wants to ascertain “who is entitled to what, what are the rights of each one, what are the obligations of every state,” he said.

“What are our options with regard to the whole issue of the West Philippine Sea in the South China Sea? I subscribed to this oath when I assumed office. I have to defend [our] national territory and our sovereignty,” he said.

“We went to arbitration primarily because that is a means to resolve the dispute consistent with the policy of peaceful [resolution] and in conformity with the international law.”

Asked how confident he was that the Philippines could secure a favorable decision at the Itlos, Aquino said, “It’s difficult to speak with finality at this point in time.”

The President instead noted that the decision to seek arbitration was the product of a “consensus” following a meeting with former Senate President Juan Ponce Enrile, House Speaker Feliciano Belmonte and “senior members of the Cabinet who are focused on this issue.”

The Chinese Embassy on Monday quoted Foreign Ministry spokesperson Hong Lei as rejecting arbitration and accusing the Philippines of “illegal occupation of some of China’s islands and reefs.”

Hong said the Philippines agreed to China’s position to settle disputes through direct negotiations in a series of bilateral documents and in a 2002 declaration signed by Beijing and the 10-member Association of Southeast Asian Nations (Asean) on the conduct of parties in the South China Sea.

“The Philippines is obliged to honor its own commitment,” he said.

As a party to Unclos, China also declared in 2006 that such disputes were excluded from arbitration, Hong added.

Department of Foreign Affairs spokesman Charles Jose said Manila “never ruled out anything” with regards to resolving the dispute. He said it was up to the tribunal to determine if the case could be subject of arbitration.

That 2002 nonbinding declaration on the South China Sea was seen as a first step to forging a binding agreement. China has only reluctantly agreed to open consultations and has lobbied some Asean members to prevent consensus.

Aquino expressed frustration that after more than a decade of talks between Asean and China, “we still have no code of conduct.”

“So what are our options with regards to the whole issue,” he said. “I have to defend national territory and our sovereignty.”

The Philippines has urged other claimants to join the arbitration case, but none has done so publicly. China, Brunei, Malaysia, the Philippines, Taiwan and Vietnam have overlapping claims across the busy South China Sea.

China has asked claimants to settle the disputes through one-on-one negotiations, an advantage for Beijing because of its sheer size and clout. It has also warned Washington not to get involved.

In Washington, US State Department deputy spokesperson Marie Harf backed the Philippines’ action, saying “all countries should respect the right of any states party, including the Republic of the Philippines, to avail themselves of the dispute resolution mechanisms provided for under the Law of the Sea Convention.”

“We hope that this case serves to provide greater legal certainty and compliance with the international law of the sea,” she said in a statement on Sunday.

She reiterated a longstanding US position that all parties refrain from taking unilateral actions that are “escalatory and destabilizing, to clarify their respective maritime and territorial claims in accordance with international law, and to commit to the peaceful management and resolution of disputes.”—With reports from Christine O. Avendaño and AP