Mother, son succeed in Land Down Under | Global News

Mother, son succeed in Land Down Under 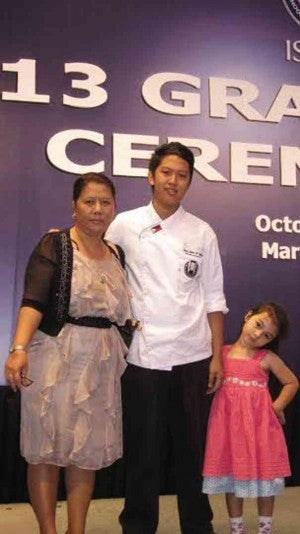 CARVING A NAME FOR THEMSELVES Katrina, Paolo and Angela Harrold

For mother and son, Katrina Develos Harrold and Paolo Janssen, success in a foreign country is not measured by skin color, age, nationality nor education, but by perseverance and self-esteem in one’s chosen fields.

A dual citizen of Australia and the Philippines, Katrina, 49, has just finished her Bachelor of Commerce, Major in Accounting, degree at the Australian Catholic University in line with the Australian standard of education while managing their family business—J and A Harrold Services, a consultancy service company involved in occupational, health and safety services.

Meanwhile, Paolo, 20, the youngest chef ever employed by his company, is starting to carve a name for himself as a commis chef at Qantas Chairman’s Lounge under Accor, a company that operates in 90 countries.

In 2007, Katrina and her Australian husband, John Reed Harrold, with one-year-old daughter Angela, decided to move to Australia, leaving Paolo in the Philippines to finish his studies.

“The plan was to stay in my country and visit Australia during holidays. But our plans changed upon seeing that we could not afford the medical [costs] and education that we wanted for our daughter if we had stayed in the Philippines,” Katrina explains.

Katrina suffered from depression being away from her immediate family and son Paolo. Her husband was always away, so she and Angela were left in the house most of the time.

“I missed the Philippines so bad that I wanted to go back home after two weeks. I was always crying,” she recalls. She also missed eating rice. She did not know how to cook rice in a microwave oven so she had to call her Filipino friend in Perth.

She also had to adjust to the different seasons. She experienced the coldest and the hottest seasons, which made her sick.

To ease her depression and boredom, her husband bought her a computer. Since then, she was able to communicate more often with her family. She had Friendster and, eventually, Facebook accounts that helped her get updated with the news from the Philippines. Her husband also encouraged her to study again since Angela was still a baby.

In 2008, when she began her studies, Katrina was also employed as an administrative bookkeeper in a nonprofit organization while her husband worked in several industries as occupational, health and safety manager.

“I had to study in order to be in line with Australian standards. I graduated in the Philippines in 1987 with a degree in accounting. My course study is outdated. Although they credited some of my basic accounting, I still needed to go back and study again. There is really a huge difference. I needed to study Australian taxation law and accounting because the subjects must conform with the International Accounting Standard,” she explains.

It took her years before she fully adjusted to life in Australia. While studying, she decided to put up a consultancy business using their ABN (Australian Business Number). The J and A Harrold Services is doing all occupational, health and safety services to ensure that workplaces are safe. Katrina is in charge of the administrative and financial side while her husband is on the operation side. 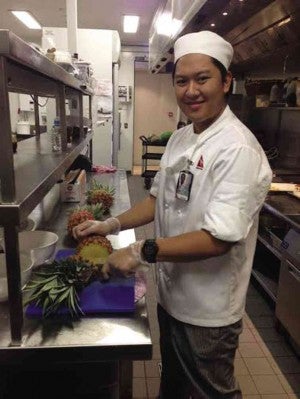 THE TWENTYSOMETHING studied Culinary Arts at International School of Hotel and Management in Quezon City.

On becoming a chef

Paolo grew up without a father. His uncles and grandfather became his “father.” Paolo thought his family’s setup was a normal one. Thus, one characteristic that became his ticket to success is his capability to adapt to any situation. He did not ask for his biological father, instead, he enjoyed the love showered upon him by his mother’s family.

In 2004, his mother married an Australian who later adopted him and eventually petitioned him to Australia.

While his mother was adjusting to her new life in Australia, Paolo surprised his family by enrolling in Culinary Arts at International School for Culinary Arts and Hotel Management (Ischam) in Quezon City.

“Instead of taking an IT course, which was my first preference, I decided to enroll in culinary arts out of curiosity, and maybe because it is not a traditional school environment. It also motivates me financially. I will only do it for 14 months. I thought, by the time my batch [mates] finished their bachelor degrees, I am already financially stable while they are just starting to find a job,” he explains.

Armed with a Culinary Arts diploma, a little experience in culinary settings and determination, he followed his family to Australia in 2012. It was not difficult to find work because there is no age discrimination when it comes to work in Australia, unless one is a minor. He worked at Roscoe’s Pizzeria for about six months. After gaining experience, he moved to Melbourne and landed a job at Accor. His culinary degree was recognized so he did not need to study further. Since he already knows international cuisine, his adjustment to Australian cuisine was easy. He applied in companies where one of the main requirements was a willingness to learn.

“If I were in the Philippines, I would have a slim chance getting employed since hotels and restaurants there are always looking for chefs with experience, unlike here in Australia,” he says.

As the youngest commis chef, he was at first intimidated by his older colleagues. He is called names like “little Asian” or “little tiger.” He does not feel slighted, however. It is just his age that seems to be the object of their jokes and not his race. Commis chefs in the company are usually in their late 30s and early 40s. A commis chef is a junior chef working in the different kitchen stations before moving on to the next level.

Usually, a commis chef holds the position for years until such time that he or she masters all the tasks at each station.

“What I like here most is the equality in the workplace. We don’t need to call our supervisors ‘ma’am’ or ‘sir,’ only their first names, unlike in the Philippines where hierarchy is very evident in the workplace,” he explains.

Paolo’s training in the Philippines gave him an advantage in working in a high-pressure environment, thus, working at Qantas-Accor is not only challenging but it also helps improve his craft. He plans to study pastry making and a signature praline paste using local and organic ingredients because the Australians are health conscious.

“I want to create a dessert where the diners do not count calories while eating,” he enthuses.

Years from now, he sees himself as an executive chef who owns a restaurant where he’s the boss.

He has this to say: “Go for it. At first you might be clueless. There will be hardship, don’t back out. Just start with the basics. As long as there is passion, as long as you enjoy what you are doing, there is nothing to worry about. Everything will fall into place.”

For Katrina, her dream is to pursue master’s and doctorate degrees. She even contemplates studying law in spite of her age.