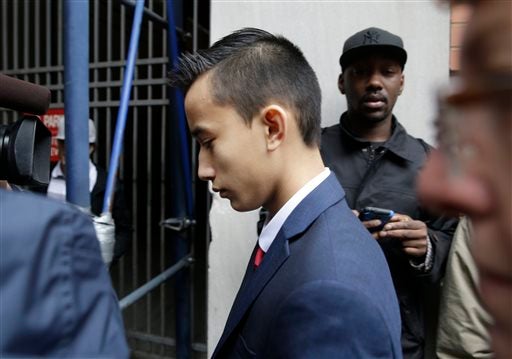 After a stunt that spotlighted lapses at one of the nation’s most security-conscious locales, 16-year-old Filipino-American Justin Casquejo did his required 23 days of service — and six extra ones — plus two sessions of youth counseling, Manhattan Criminal Court Judge Felicia Menin said.

“The court is impressed by your sincerity, remorsefulness and willingness to accept responsibility for your conduct,” she said.

Casquejo and his lawyer declined to speak at the sentencing or outside court. Casquejo pleaded guilty in July to breaking a city misdemeanor law against scaling tall buildings without permission in his March 16 escapade. About a week later, three extreme-skydiving fans were arrested for a September leap off the tower.

Together, the episodes stirred officials’ concern and prompted security changes at the trade center.

Casquejo sneaked through a construction-fence gap, past an inattentive security guard and up a ladder, scaffolding, elevators and stairs to the top of the unfinished 1 World Trade Center skyscraper around 4 a.m., authorities said. After spending about two hours atop the symbolic 1,776-foot (541-meter)-tall tower — the nation’s tallest building — Casquejo encountered a security guard as he descended and was arrested.

Growing up in Weehawken, New Jersey, Casquejo developed a yen for scaling precarious structures and for parkour, an extreme sport that combines elements from martial arts, gymnastics and rock climbing, a friend has said.

The guard he eluded was subsequently fired, and the building’s head of security resigned. Both worked for a private company protecting the building. The government agency that owns the trade center, the Port Authority of New York and New Jersey, later hired a company that guards its airports to handle security at trade center entrances.

The skydivers and someone accused of helping them on the ground have pleaded not guilty to various charges.

Casquejo gave the court a 1,200-word essay explaining what he had learned from the episode, Menin said; the essay and the rest of the case file were sealed because he was declared a youthful offender. The offense will be wiped from his record.

“The court has every reason to believe” Casquejo will go on to a productive adulthood, Menin told him. “It will be up to you to prove the court right.”