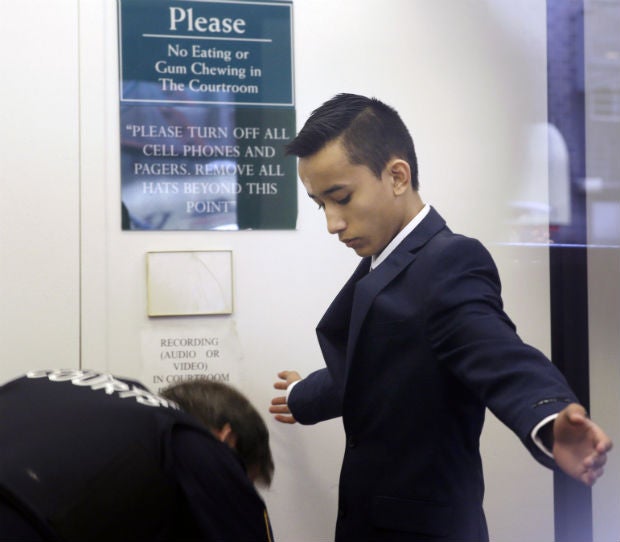 In this April 2, 2014 file photo, Justin Casquejo passes through security at a New York City courthouse. Casquejo, who sneaked to the top of the 1 World Trade Center tower in March, pleaded guilty Wednesday, July 30, 2014, in an escapade that fanned concerns about security at the nation’s tallest building. AP

NEW YORK — A teenage daredevil who sneaked to the top of the 1 World Trade Center tower in New York pleaded guilty Wednesday (US time) in an escapade that increased concerns about security at the nation’s tallest building.

Together, the cases prompted a security shake-up at the World Trade Center, one of the country’s most security-conscious sites after the 2001 terror attacks.

Casquejo’s lawyer, Pamela Griffith, declined to comment Wednesday. The teen is due to be sentenced in September.

Casquejo, a 16-year-old climbing enthusiast, slipped through a small gap in a construction fence and then used a ladder, scaffolding, elevators and stairs to scale the unfinished tower early on March 16, according to court papers. Along the way, he got by an inattentive security guard, authorities said.

“I was walking around all night trying to figure out how to enter the site, knowing it was a no-trespassing zone,” Casquejo later told a police officer, according to court papers.

After spending about two hours atop the symbolic 1,776-foot (541-meter) tower, Casquejo encountered a security guard as he descended.

After Casquejo’s climb, the building’s private head of security resigned, the guard Casquejo eluded was fired and the Port Authority brought in a company that guards its airports to handle security at trade center entrances and monitor security systems there.

Read Next
SONA shouldn’t have been only about Aquino’s accomplishments
EDITORS' PICK
Latest patient brings number of COVID-19 cases in Cebu to 29
Anne Curtis, Angel Locsin, and Gabbi Garcia: Celebrity tweets on the state of the nation
Senators on Duterte ‘shoot’ warning: ‘Let’s address hunger’ instead
Vico Sotto replies to NBI, asks for clarification
DOLE Bicol shells out P45.7M in aid for 9,000 displaced workers
Macalintal: NBI on ‘fishing expedition’ as no ‘genuine’ case vs Vico
MOST READ
Angelica Panganiban on endorsing Duterte in 2016: ‘Patawarin niyo ko’
PACC to NBI: Probe Robredo for ‘competing with national govt’ in fight vs COVID-19
PACC’s COVID-19 motto? ‘Lahat ng tutulong, ikukulong’ — Lacson
5 Filipinos on Forbes Asia’s “30 Under 30” roster
Don't miss out on the latest news and information.