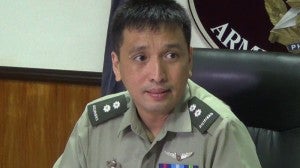 MANILA, Philippines—After giving the order for the “greatest escape,” the Filipino Chief of Staff of the United Nations Disengagement Observer Force (Undof) submitted his resignation papers, but the Force Commander has other thoughts.

Lieutenant General Iqbal Singh Singha, Force Commader of Undof, rejected the resignation of Colonel Ezra Enriquez on Sunday and instead put him under leave of absence as only the Department of Peacekeeping Operations can accept resignations from its direct-hires.

Enriquez is a direct-hire of the Department of Peacekeeping Operations under the UN.

Lieutenant Colonel Ramon Zagala, Armed Forces of the Philippines Public Affairs Office Chief, said Wednesday that Enriquez filed his resignation because of his disagreement with Singha.

“He (Enriquez) defied the order of the Force Commander in the handling of the situation during the attack at Position 68,” Zagala said.

Around 40 Filipino UN Peacekeepers stood their ground against Syrian rebels double their number in Position 68 that led to a seven-hour firefight on Saturday evening (Manila time).

After the firefight, the Filipinos had the “greatest escape” sneaking past the sleeping rebels, trudging through a minefield for one-and-a-half hours before other UN Peacekeepers brought them to Position 80.

“The mission of the Undof is the separation of Syria and Israel, and ensure the safety of all Peacekeepers that are in the area,” Zagala said. “Enriquez was only doing his mandate although he defied the Force Commander he was still true to his mission of protecting the security and safety of our troops.”

Singha intially ordered the pull out of all troops in Positions 60, 68 and 69.

When Syrian rebels held hostage 44 Fijian Peacekeepers, who dropped their arms and surrendered during the escape, Singha also wanted the Filipinos to also surrender.

Singha ordered the Filipinos to also surrender their arms for the supposed return of the Fijians, but Enriquez would have none of it.

Enriquez ordered the escape after the firefight and defied the waving of the white flag order from Singha.

In a message, Enriquez said Singha did not approve his resignation, instead he was put under administrative leave.

“The force commander did not accept my resignation. I offered my resignation but he put me on administrative leave until the final repatriation of our troops,” Enriquez said.

Filipino Peacekeepers stationed in Golan Heights are set to come back to the Philippines in October after their tour-of-duty.

If an investigation is called upon, Zagala said the UN would request the AFP to investigate Enriquez.

General Gregorio Pio Catapang, AFP Chief, talked to Singha before the firefight happened, Zagala said, and told the Undof Force Commander that Filipino troops would not give up their arms.

“Gen. Catapang told Gen. Singha to please look out for the safety of our troops and that we will not give up our firearms,” Zagala said.

What the AFP can do now, Zagala said, is to submit a report to President Benigno Aquino III of what transpired in Golan Heights.

“Col. Enriquez took a stand for our country and it is just right that the leadership of the Armed Forces of the Philippines and our government will support him,” Zagala said.

Read Next
Filipina nurse tests positive for MERS-Cov
EDITORS' PICK
‘Justice will be done,’ Duterte assures as he vowed probe on Jolo incident to bare ‘truth’
EuroMillions Superdraw: A lottery draw unlike any other is coming to the Philippines
Current dominant strain of COVID-19 more infectious than original—study
DOLE: Return of OFWs’ remains from Saudi to be ‘delayed,’ deadline moved to ‘early next week’
Smart releases Hyun Bin’s second TVC
Water remains our saving grace right now
MOST READ
Locsin warns of ‘severest response’ if China’s army drills in SCS ‘spill over’ to PH domain
Duterte tells military: No other president looked at you the way I did
BREAKING: Duterte signs anti-terror bill into law
‘Very timely, historic’: Senators laud passage of anti-terror bill despite ‘pressures’
Don't miss out on the latest news and information.