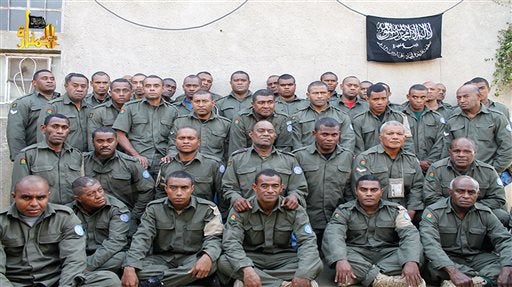 This undated file image attached in a statement released on Aug. 30, 2014, on the Hanin Network website, a militant website, shows Fijian UN peacekeepers who were seized by The Nusra Front on Aug. 28, 2014, in the Golan Heights in the buffer zone between Syria and Israel. The UN Security Council on Wednesday, Sept. 3, demanded the release of the 45 Fijian peacekeepers. AP PHOTO/HANIN NETWORK WEBSITE

The 15 members of the council unanimously approved a declaration condemning “in the strongest terms” the detention of the Fijians.

They were captured almost a week ago, when the rebels stormed a Golan Heights crossing.

The council “reiterated their call for the peacekeepers’ immediate and unconditional release,” adding in its statement that “there can never be any justification for attacks on or the detention of UN peacekeepers.”

The government of Fiji also has called for their release, stressing that the neutral peacekeepers do not take sides in any conflict.

A team of UN negotiators on the ground in Golan is trying to secure the Fijians’ freedom.

The Fijians are part of the UN Disengagement Observer Force (Undof) established in 1974 to maintain the ceasefire between Syria and Israel forces in the Golan, and oversee the implementation of a disengagement agreement.

The capture of the peacekeepers occurred as Syrian troops and Islamist rebels battled close to the armistice line with Israel in the Golan Heights.

In addition to calling for their release, the Security Council “demanded that all groups other than Undof must abandon all Undof positions,” and also called on the rebel to return vehicles, weapons and other equipment confiscated from the peacekeepers.

A group of 75 Philippine peacekeepers were also besieged by the Al-Qaeda-linked Al-Nusra fighters, but they eventually were able to avoid capture, a development welcomed by the council in its declaration.

“The members of the Security Council welcomed news that all Filipino peacekeepers are now safe and they commended the efforts of Undof’s Quick Reaction Force,” the statement said.

Officials in Fiji said that the Al-Nusra rebels have made several demands, including the delivery of humanitarian aid to a small town outside Damascus which is an Al-Nusra Front stronghold.

They also are demanding to be removed from a UN terror blacklist, officials in the Pacific nation said.